Bates at Night: S’mores and more at the Bates Outing Club Lean-to

At 8:33 on a recent Thursday night, a few miles from campus, a white butane lighter ignited some kindling, and soon flames illuminated smiles on faces gathered around a campfire.

As the burning wood snapped and popped, and smoke mixed with incoming fog, students who’d traded dorm rooms for sleeping bags and stars began to toast s’mores at the Bates Outing Club Lean-to. 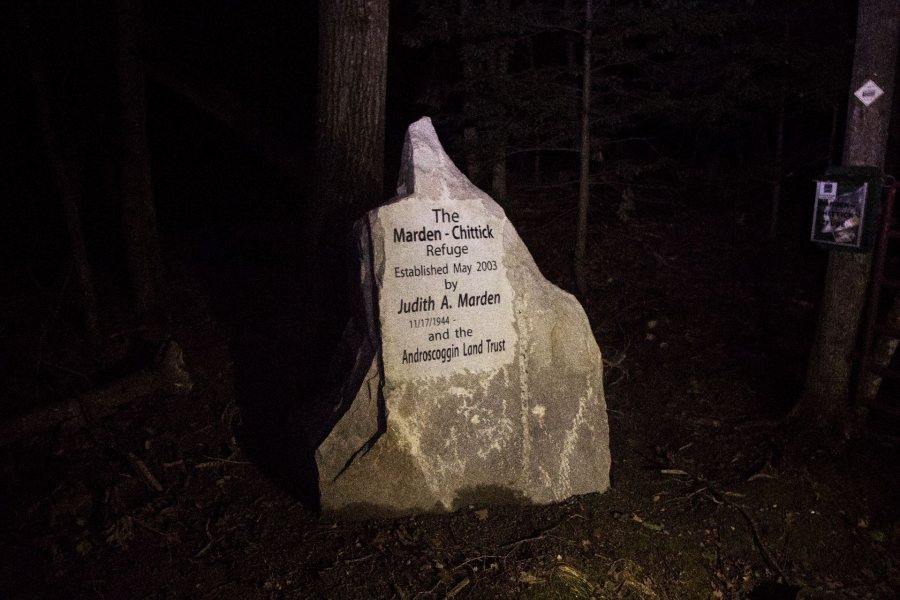 “There is something very satisfying about building a fire,” said Megan Detels ’20 of Marblehead, Mass. “I love smelling like campfire all the next day. When I smell my hair throughout the day it reminds me that I woke up outside, to the rising sun.”

“Something simple like spending a night in the lean-to breaks up our very scheduled lives,” said Nellie Breen ’21 of Pasadena, Calif. “It reminds us to appreciate the bigger picture.”

It was Breen’s first trip to the lean-to, and a very intentional one. “I wanted to push outside my comfort zone and embrace the uncertainty of meeting new people,” she said. “We’re lucky to be part of a community where people are so welcoming and supportive of new experiences.”

“Life at Bates can get pretty hectic,” said Chandler Ryan ’19 of Delmar, N.Y. “It can be such a reprieve to spend a night not worrying about schoolwork and just focus on building a fire and eating s’mores and getting a good night’s sleep.”

Built in 1999 as a Short Term project by Bates students — including Ben Ayers ‘99, who now does economic sustainability work in Nepal — the 10-by-17 lean-to sits within the Marden-Chittick Refuge, 200 acres of land that Judy Marden ’66 gave to the Androscoggin Land Trust as a conservation easement.

“I hope by providing the space for the lean-to, I’m doing some part to bring more kids outdoors,” said Marden, whose long and active involvement with the BOC dates to her college days when, she recalled, BOC leaders “led me up Tumbledown Mountain the first weekend of my freshman year. They changed my life — for the good!”

“I think the most important task for the BOC is to get people out on trips who might not otherwise go on them,” Ryan agreed. As a first-year, she was “definitely nervous about going on trips. The solid, approachable leadership of some strong women at the helm of the Outing Club encouraged me to get involved.”