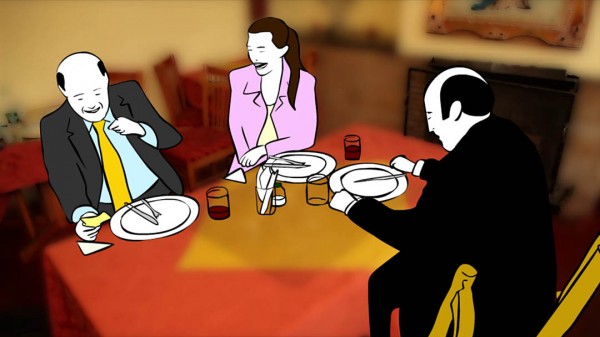 A scene from “Fat, Bald, Short Man,” a 2011 production in rotoscope by Colombian director Carlos Osuna.

The Global Lens 2012 film series, a showcase of award-winning international features, continues in weekly screenings at 7:30 p.m. most Mondays in Room 104 of the Olin Arts Center, 75 Russell St.

Editor’s Note: A previous article about this film series, as well as the printed October at Bates calendar, incorrectly indicated that there was an admission fee for these screenings. In fact, admission is free. We regret the error.

Playing on Oct. 1 is  Fat, Bald, Short Man, a 2011 film by Colombian director Carlos Osuna. For a complete schedule of films, visit bates.edu/museum or call 207-786-8212. The series is sponsored by the Bates College Museum of Art.

The 2012 series comprises films from Argentina, Brazil, Colombia, Iran, Iraq, Morocco, Rwanda and Turkey, as well as Albania. “Our community grows more diverse each year, and providing films from around the world helps everyone understand the similarities of the human condition and the particular challenges people face in various countries and cultures,” says Anthony Shostak, curator of education for the museum and coordinator of Global Lens at Bates.

“The lineup this year is really going to surprise audiences,” says Susan Weeks Coulter, chair of the Global Film Initiative Board of Directors. “The cinematics are strong, the tone is fresh and the stories are thought-provoking and unlike anything we’ve seen before.

“We’re thrilled to be screening them at the Bates College Museum of Art.”

This is is the fifth series of Global Lens films that the Bates museum has presented.

Fat, Bald, Short Man (91 min.) tells the story of a lonely middle-aged notary whose prospects unexpectedly change after he joins a self-improvement group and his charismatic new boss — and strangely affable doppelgänger — takes an interest in his life.

Here’s the remainder of the autumn 2012 schedule:

The Global Film Initiative is a U.S.-based international arts organization specializing in the support of independent film from Africa, Asia, Central and Eastern Europe, Latin America and the Middle East. Founded in 2002 to promote cross-cultural understanding through the language of cinema, the initiative awards numerous grants to deserving filmmakers from around the world each year, and supports a touring film series entitled Global Lens.