‘The embodiment of Bates values,’ Spencer is installed as president 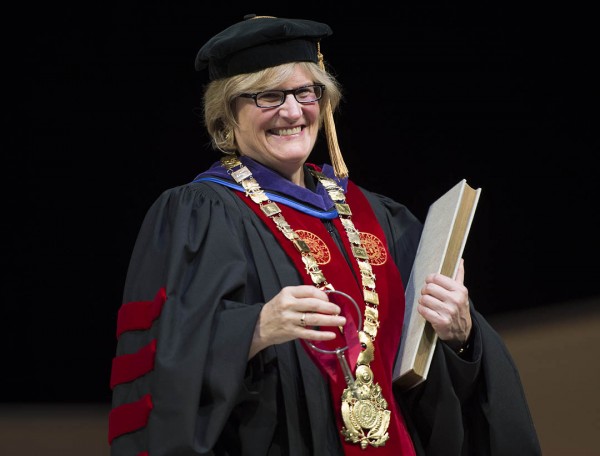 Clayton Spencer holds the symbols of office during her installation ceremony as the eighth president of Bates College. The symbols are the keys, the presidential collar and the record book.

Bates formally installed Ava Clayton Spencer, a woman described by her former boss as the “embodiment of Bates values,” as its eighth president before a gathering of 2,500 in Merrill Gymnasium on Friday afternoon.

Spencer, who officially began work at Bates in July, was ceremonially installed as president in a celebration marked by glowing good wishes, a few tough facts and just enough pomp. Filling the gym were students, faculty, friends, Spencer’s predecessors as Bates president and 72 delegates representing colleges and universities from as far away as England.

Also on hand were Spencer’s family and friends — including her parents, who got a briefly teary shout-out from their daughter as she held the cap her father Sam had worn as president of Mary Baldwin and of Davidson colleges.

With a sleek stage, complete with giant video screens, the usually utilitarian Merrill was transformed for the occasion into a stunning ceremonial showcase. Michael Bonney ’80, chair of the Bates Board of Trustees, presided over a festivity that included music written and performed by faculty and students, formal greetings from diverse quarters and the ritual presentation of the symbols of the college — collar, record book and keys.

Complete video of the installation ceremony:


The metaphorical theme of the ceremony, this notion of well-wishers gathering from near and far to bring greetings and other rhetorical tribute to the new leader, was especially touching at Friday’s ceremony. In part, that was because of the real substance, whether factual or emotional, many of the speakers delivered in their remarks.

Bringing greetings from the students, for instance, Jacquelyn Holmes ’13 assured Spencer that “we will always be here for you — please lean on us, use us and keep us in the loop.”

Greetings from the Twin Cities came from mayors Jonathan LaBonté, of Auburn, and Robert Macdonald, of Lewiston, who offered a gracious verbal hand of friendship.

Representing the Academy, Williams College president and physics professor Adam Falk provided a useful reminder of Spencer’s contributions to higher education even before she got to Bates, as an aide to U.S. Sen. Edward Kennedy, and as vice president for policy at Harvard.

Falk, who has seen Spencer in action through her service as a Williams trustee, told her that “you understand as well as anyone I know what makes colleges and universities work.”

Perhaps the deepest dish on the new president came from her former boss, Harvard President Drew Gilpin Faust. She shared a droll summary of Spencer’s contribution to Harvard in the words of William Fitzsimmons, that university’s dean of admissions and financial aid: “Anything good that happened at Harvard from 1997 to 2012 was because of Spencer, and everything bad was something she objected to.” 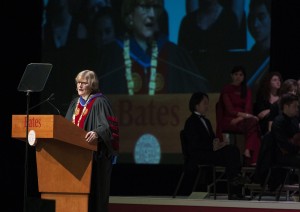 Clayton Spencer speaks during her installation ceremony as the eighth president of Bates College on Friday, October 26, 2012.

More seriously, though, Faust traced Spencer’s bedrock dedication to justice to a Southern childhood lived during the height of the civil rights era, and named Harvard initiatives, such as the Crimson Summer Academy, through which that dedication has borne fruit. Through education, Faust said, Spencer has bent Martin Luther King Jr.’s moral arc of the universe a bit further toward justice.

Bates’ new president, she said, is the “embodiment of Bates values.”

Spencer began her own address with her predecessors at Bates, who faced their own exigent landscapes of change, crisis and opportunity. In our time, she said, the turbulence is driven by technology that is transforming both how colleges do their work, and how that work is evaluated outside academe.

“These qualities are in the DNA of Bates College.”

She used Benjamin E. Mays ’20, the great educator, theologian and civil rights leader, as a both a metaphor for the founding Bates ethos, and an illustration of applying that ethos in the coming times. Coming to Bates, she explained, Mays both benefited from and expanded Bates values.

Bates was founded, she said, “because, somehow, from our very beginnings, we encountered individuals in their full humanity. We took as our task educating them with intellectual rigor, ethical responsibility and care for their fellow human beings.”

“These qualities are in the DNA of Bates College, and they define us to this day. They also point the way forward.”

Mays’ example, too, illustrates both the focus on individual growth in the liberal arts model, and the role of community in nurturing that growth. “The most complete kind of human learning takes place in community, with the solidarity of companionship and the challenge of truth,” she said. And the most open and diverse community is the best kind of community to support learning.

“At Bates, we claim this union of excellence and opportunity as a core element of our identity, and we need to continue to build on this deep aspect of who we are.”

Bates’ eighth president concluded her inaugural address with a reference to the late Steve Jobs, who once told a group of graduating students that “Your time is limited, so don’t waste it living someone else’s life.”

“Likewise, at Bates, we don’t have time to waste,” she said. “But we are not in danger of living someone else’s life.  We know who we are and what we stand for, and we stand ready – together — to challenge ourselves and to engage the world.”