Local alumni share how Bates prepared them for the workplace

By Victoria Stanton. Published on March 4, 2013

It didn’t take long for Kirk Nugent to ask the question that was on everyone’s mind.

“What did you learn at Bates that you have used in the workplace?”

Nugent, a poet and motivational speaker, posed his top-of-mind question to four Bates alumni panelists who’ve built, and are building, their careers in the Lewiston-Auburn community. 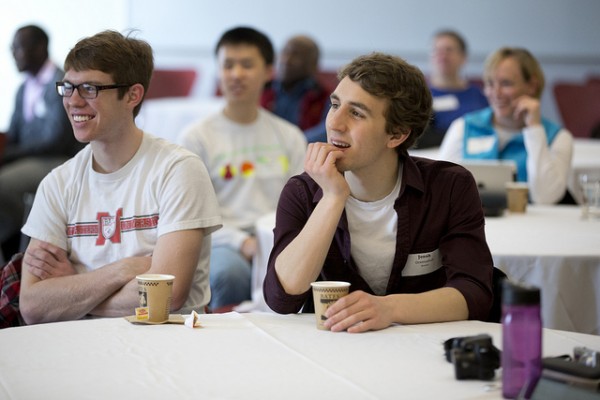 Michael Creedon ’15 and Jonah Greenawalt ’16 react to panelists at Beyond Intellectual Profit, a symposium on navigating diversity in the workplace. Photograph by Phyllis Graber Jensen/Bates College.

The panel, composed of Sarah Davis ’10, Nate Libby ’07, Julia Sleeper ’08 and John Jenkins ’74, was one of several discussions during the March 2 Bates symposium Beyond Intellectual Profit: Using Classroom Knowledge in the Workplace, coordinated by Therí Pickens, assistant professor of English, and facilitated by Nugent. 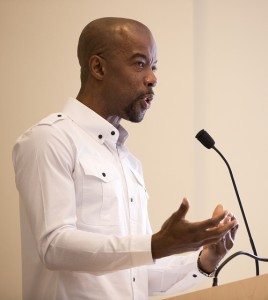 Davis said she experienced a “seamless connection” between Bates and her work with Welcoming Maine, an organization that supports community integration for immigrants and refugees. She began working directly with the Lewiston community through the Harward Center in her first semester and went on to design her own major around social justice. Bates gave her the freedom to connect theory and practice.

Libby pays the bills as a property manager and nonprofit consultant but is deeply involved in local politics as a Lewiston city councilor and state representative to the Maine Legislature. A history major at Bates, he credits the Short Term unit “Introduction to Historical Methods” — aka “History Hell” — with teaching him to think critically and evaluate information. As a scholar, politician and consumer of information, he says, “You must be skeptical of what you read and what you hear.”

Sleeper came to Bates expecting to major in biology only to discover a passion for education. A placement at nearby Lewiston Middle School exposed her to the range of challenges faced by local youth, particularly those from immigrant and refugee families. Like Davis, she used the classroom as a place to better understand her work in the community, and vice versa. She has since co-founded Tree Street Youth in Lewiston, a community center that empowers youth to make healthy choices through academics, athletics and the arts.

When Jenkins arrived on the Bates campus in 1969, he was one of only a handful of students of color. He jokes that he didn’t notice — he was too busy keeping up with his grades. Bates, he says, is “relentless in teaching you to persevere.” Bates helped him become a “citizen of the world” and taught him to take initiative, which certainly served him well in his role as a community leader. Now a public speaker, Jenkins is the former mayor of Lewiston and Auburn as well as a state senator.