China: State of the culture, culture of the state 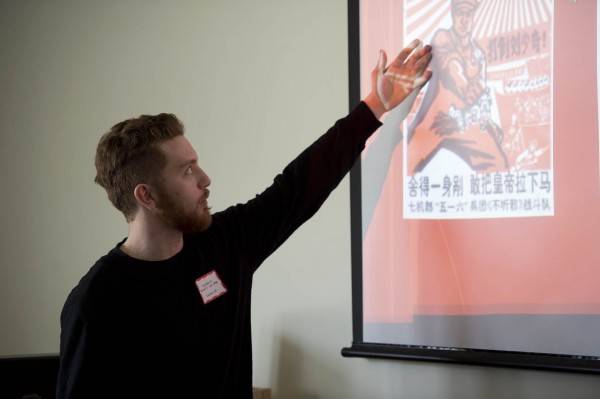 It’s common knowledge here in the U.S. that the Chinese government’s involvement in arts and entertainment is, shall we say, much more hands-on than Americans are used to.

Clay Baldo of Santa Fe, N.M., talked about mid-20th century propaganda posters and the communist Chinese government’s shifting intentions for them. Baldo’s focus was the contrast between agitative and integrative propaganda — in musical terms, “Power to the People” vs. “Get Together.”

Of equal concern in mid-century China was the time-honored propaganda technique of holding up scapegoats, such as the Gang of Four, as a way of putting a face on politically odorous tendencies. The “Smash the Gang of Four” campaign in the 1970s, said Baldo, “is my favorite, because I hate the Gang of Four.”

Moving from Mao’s rise to dominance through the Cultural Revolution and beyond, Baldo’s poster gallery segued from scenarios of sanctioned worker violence against class enemies to pictures of harmonious collaboration in attractive landscapes. (Writers in attendance at the presentation were especially gratified by depictions of the pen as a weapon just as efficacious as a spear or shovel.) He noted that while the Chinese government still uses something like propaganda posters, nowadays they are more likely to caution against littering.

Eleanor Anaclerio of Winnetka, Ill., a double major in art and Chinese, talked about the high-profile dissident artist Ai Weiwei. Anaclerio’s own artwork seemed to have some oblique bearing on her presentation: She is also a photographer whose camera obscura images explore notions of public and private space as they seem to bring Bates campus scenes into student bedrooms.

Anaclerio argued that in a more liberal social-political context, Ai Weiwei could be doing what he does now and yet would not be seen as a dissident. Instead, the political climate in China has made him a dissident, she said, “but he hasn’t shied away from it at all.”

What impressed her particularly about this intrepid conceptual artist, she said, is his ability to create a community around him wherever he is, whether it was New York in the go-go 1980s or on the Internet today — where Ai Weiwei has pitched his big tent because the Chinese authorities won’t let him leave the country.

Anaclerio pointed to Ai’s 2010-11 Sunflower Seeds exhibition at the Tate Modern, comprising 100 million handmade porcelain “seeds” spread on the gallery floor. “Those seeds individually can’t do much,” she said. “But when there are so many of them together, even when you walk on them, you hardly displace any.”

Maura Maloney of Ellicott City, Md., chose the toughest row to hoe, subjecting herself to hours of dating shows from Chinese television, sans subtitles, to learn about female roles in Chinese society. Maloney studied episodes of the reality shows If You Are the One and Take Me Out, both based on a British show.

The shows are elaborate affairs in which male contestants use videos to make their case to a platoon of women, who can accept or reject the prospects by showing indicator lights. The shows, she said, “reflect the collective anxieties of Chinese singles” — a fraught arena in particular for women, who under Mao Zedong gained a kind of nominal gender equality that, Maloney explained, was more about making political points than advancing women’s real interests.

Bates economics professor Maggie Maurer-Fazio, a China specialist, asked Maloney about state censorship on the shows, in view of another Chinese program that drew official ire because viewer voting, à la American Idol, was deemed too participatory. Censorship exists, Maloney replied, but is less political than moral, responding to women portraying themselves as sexual beings and expressing untoward interest in money.

Agency, Maloney found, is the key to contentment. The women she observed didn’t want to have traditional qualities of character like gentleness and domesticity imposed on them — but were willing to assume those qualities if it was their choice. “I hear the same thing from my students,” said a member of the audience, a professor of women’s studies from Clark University.

Another listener asked if Maloney’s project had inspired her to watch American dating shows. No, said Maloney, who spent much of February watching 16 hours of the Chinese shows. “I think that would kill me.”