Devin Tatro, a junior from Haverhill, Mass., who runs on the Bates women’s cross-country team, intended to give herself a major break from running when she went to Uganda in the fall of 2012 to study sports development in the eastern village of Kapchowra.

Instead, in the course of doing research, she ended up running regularly and organizing a road race for hundreds of Kapchorwa elementary school students — children lacking a formal athletic program but inspired by Stephen Kiprotich, a runner from their community who won the gold medal in the men’s marathon at the 2012 Summer Olympics. 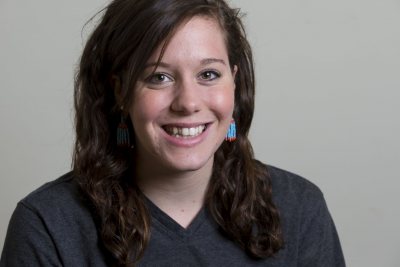 For Devin Tatro ’14, helping to organize the first Kapchorwa Kids Race “was really a group effort, a learning experience in delegating tasks and bringing things together.” (Sarah Crosby/Bates College)

The result, Tatro said in a 2013 Mount David Summit presentation on study abroad, was an experience that unexpectedly combined her interests in anthropology, world travel, and running. It may also help keep alive a dream for some of the children she worked with.

“I discovered that while physical education is required in the national curriculum of Uganda, these programs are underfunded, much to the frustration of school districts,” Tatro explained.

Subsequently, the head of the school district’s sports office told her that “we really wish that youth in Kapchorwa had more athletic competitions. We have a lot of talent, we have a lot of kids who are passionate about sports, and we have Stephen Kiprotich, who is really inspiring everyone in the area. Everyone wants to be a runner. But there is no track meet, no after-school football [soccer], no gym classes.”

She also met with adult members of the Ugandan National Cross Country Team, who compete at very high levels despite underfunded facilities, programs and training. Tatro saw a way to contribute. “I started concocting this dream: What if there was a road race for kids in Kapchorwa, Uganda?”

Community leaders led by Peter Chelangat liked the idea and agreed to help. Bates did likewise, providing Tatro a $500 Barlow Grant to help with expenses. And in four weeks Tatro and others organized the first Kapchorwa Kids Race, complete with prizes.

“It was really a group effort, a learning experience in delegating tasks and bringing things together,” said Tatro.

The event actually became two road races, a 3K and 5K, that took place Dec. 1, 2012, drawing 400 grade-school competitors, divided into boys’ and girls’ competitions with multiple age groups. The top three finishers in each age group of each division won a stipend for school supplies.

“Members of the community were extremely excited about the event,” Tatro said after her presentation. “Leaders and educators especially expressed that they were encouraged to build off the success and to implement further youth sporting events.”

She keeps in touch with members of the Kapchorwa community through email and Facebook, and has heard from the district sports officer that they have started a regional athletics association and hope to make the race an annual event.

She is scheduled to return to Uganda in May, with more support from Bates in the form of a Barlow Thesis Grant. She says she really is committed to less running this time around, with research that “will not be concerned with sports development.”

But that doesn’t mean she’s totally out of the Kapchorwa dreams race. She explained, “I plan to spend time there and look forward to observing the progress and initiatives the community has put forth.”

Seniors of 2010 share thoughts on four years at Bates