Thanks to Watson Fellowship, Norrmén-Smith ’13 will research perceptions of stroke in Africa, Asia 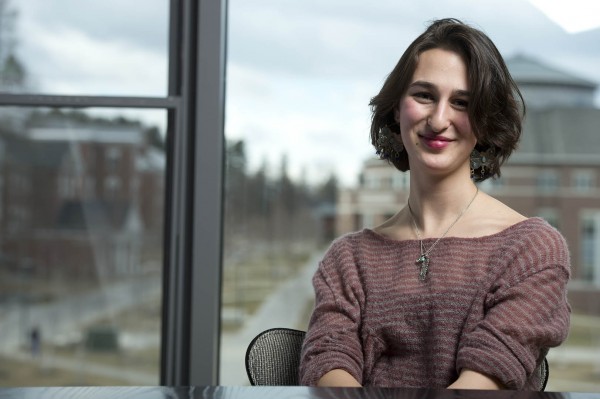 A 2013 Watson Fellowship will make it possible for a Bates alumna to spend a year in Africa and Asia researching cultural perceptions of one of humankind’s leading causes of death and disability.

A double major in neuroscience and French who graduates in May, Ingrid Norrmén-Smith of Upper Montclair, N.J., has received the Watson to support research that will explore how people in Morocco, Madagascar and Cambodia regard strokes and stroke victims.

“Stroke is a leading cause of death and disability around the world, but there isn’t a lot of literature regarding how different cultures perceive it” — even though a better understanding of such cultural perceptions could mitigate the global impact of strokes, says Norrmén-Smith, who goes by her middle name, Olivia.

“Your brain is an incredible organ that defines you, and when you have an affront to that organ, so much is changed. The effects are so personal — how people deal with disability, trauma and concepts of self, all of these different things.”

She adds, “I believe that as a Westerner, I stand to learn something valuable about how stroke victims are treated elsewhere. It may be that victims in other cultures are respected and revered, not stigmatized, and that life post-stroke is more fruitful because the support system that exists is more robust.

“I am just so happy that the Watson Foundation recognized this project.”

Awarded only to graduates of 40 highly selective liberal arts colleges, the Watson is one of the nation’s most prestigious graduate fellowships. The $25,000 fellowship is designed to identify potential leaders and challenge them in ways that foster independence, a global perspective and adaptability to new cultures. It funds research on a topic deeply important to the recipient and is conducted outside academe and the recipient’s home culture. Learn more.

“My project has two components,” says Norrmén-Smith. “One is to discern on a grand scale how stroke is perceived, and that will be accomplished via a questionnaire” completed by ordinary citizens in the destination country.

“But then I will also have personal interviews with stroke patients or people close to them.”

Norrmén-Smith has reached out to leading researchers in each country for assistance in finding stroke patients to interview and in administering the questionnaires. The questionnaires will combine basic demographic questions with scenarios depicting people afflicted in different ways by a stroke — physical, emotional and mental.

“It will be fascinating to see if disparate deficits evoke different responses,” she says. In addition, she will ask how participants would feel if a family member was experiencing stroke symptoms and what interventions the participant would take.

“Those could include options such as seeking medical help or religious advice, or whether the participant would intervene socially, pursue an exorcism, not seek help, etc.”

Although the cultures of Morocco, Madagascar and Cambodia differ in many ways, Norrmén-Smith suspects that religion will be a prime factor in shaping perceptions of stroke. She takes her lead from research into cross-cultural perceptions of mental illness that points to religion as a major determinant.

Morocco is predominantly Muslim, Cambodia primarily Buddhist and Madagascar is roughly divided between Christianity and faith practices indigenous to the island. But despite her expectations about religion’s role, “who knows what I will find?” Norrmén-Smith says. “That’s what’s intriguing.”

Norrmén-Smith first became interested in stroke while working as a volunteer and intern in New Jersey hospitals during the past several years. At the Overlook Medical Center in Summit, she conducted surveys of stroke patients and attended stroke-support group sessions.

She parlayed this experience into a project for the trauma hospital at University of Medicine and Dentistry of New Jersey, in Newark, where she created a stroke awareness brochure that has been adopted by the neurology department and disseminated through the city’s medical establishment.

At Bates, Norrmén-Smith may be better known for her stage presence than her neuroscience research. She has sung with a variety of campus bands, including the a cappella Crosstones, and has also acted in plays.

“It’s the nature of a Bates student to be doing things that he or she is passionate about and to be overcommitted — in a good way,” she says. “People are really involved with things. I think Bates is a very happy place and that has influenced my experiences here.”