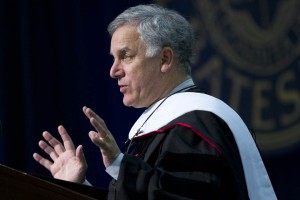 Various news outlets in a number of states picked up an Associated Press story about one of the pieces of advice Commencement speaker Gary Hirshberg offered this year’s graduates. Photograph by Phyllis Graber Jensen/Bates College.

Besides drawing an audience of more than 3,000 visitors to campus and more than 1,000 webcast viewers in 44 countries, this year’s Bates Commencement was covered by a range of news outlets in Maine and a number of other states.

In the college’s hometown, the Sun Journal of Lewiston presented online, the same day, a substantial story about the event accompanied by an array of photos. The story and several of the photos appeared in print in the next day’s issue of the paper, beginning on the front page and continuing over about half an inside page.

And Gary Hirshberg’s Commencement address advice to the graduates to question conventional wisdom and second-guess “so-called experts” got the attention of the Associated Press, which distributed a short recap that was picked up on the websites of various news organizations in Maine, California, Massachusetts and Ohio.