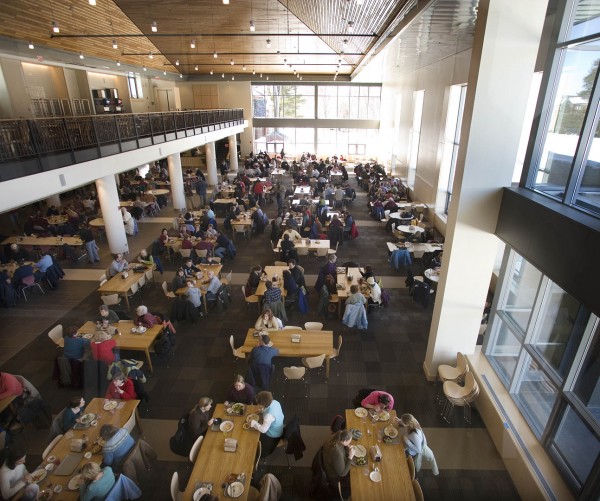 Opened in 2008, Commons exemplifies Bates Dining’s commitment to sustainability. Among its many “green” features, it makes good use of natural light to save on electricity. Photograph by Phyllis Graber Jensen/Bates College.

How far is the journey from here to a star?

Bates Dining, which in 2002 was the first food-service operation in higher education to join the Green Restaurant Association, recently earned a third star for its Green Restaurant sustainability rating from the GRA.

The improved rating, the GRA’s second-highest, puts Bates into rarefied company. Only five other U.S. colleges or universities boast three-star ratings, and Bates is the only such Maine institution.

Long recognized for its sustainable practices, Bates implemented 65 action steps to become greener still and earn the third star. Those steps covered the waterfront in terms of both function and scope, ranging from the use of water-saving faucet aerators to the high proportion of vegan and vegetarian items in Bates’ food purchases.

“We’re ecstatic” about the increased rating, says Cheryl Lacey, director of Bates Dining Services. “I think we have a true commitment to sustainability.

“We knew there were schools here in New England, notably Harvard and Boston University, that had gotten the three-star rating. We have had a strong focus on environmental responsibility for a long time now and we felt confident that we could compete with those schools.”

In certifying commercial and institutional dining operations, the GRA rigorously verifies that its member institutions are doing what they claim. The GRA awards points for sustainable steps in seven categories: energy, food, water, waste, disposables, chemicals and pollution reduction, and buildings. 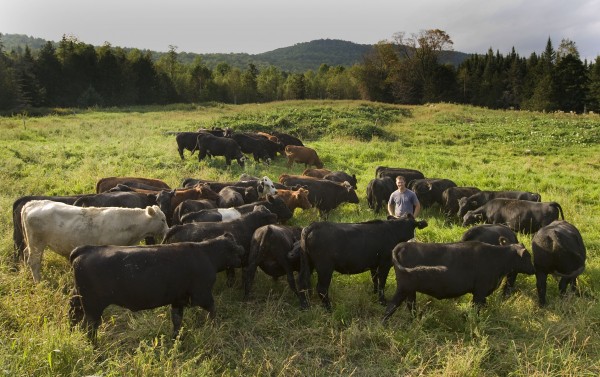 In fact, it’s a particular point of pride that Bates Dining puts very little into the waste stream. “We divert 82 percent of our waste,” says Lacey. “Very few of our peers can make that claim.” The college reduces waste through traditional recycling and composting, and by sending post-consumer waste to a local pig farm. (The GRA doesn’t award points for that particular practice.)

GRA consultants were especially impressed by Bates’ use of electric vehicles and by the engagement of a certified-green pest-control firm, Kennebunkport-based Atlantic Pest Solutions.

“Dining has a huge impact” on institutional sustainability, Lacey says. “There’s so much potential for waste, and it really points out the fact that Dining Services needs to be part of the educational process.” 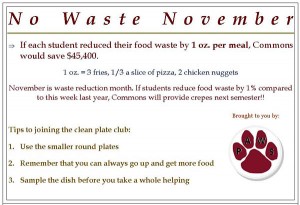 A napkin-holder card from the PAWS campaign against wasting food.

For instance, last November a student group played a key role in encouraging students to take only as much food as they can eat. In its successful campaign in Commons, the Personal Awareness, Wellness and Social Happiness Committee (PAWS) suggested ways for students to form new habits. They offered an eye-opening statistic: If every student took one ounce less food than usual — about the equivalent of three french fries — Dining Services would save $45,400 annually, or 77 percent of Bates’ comprehensive fee for one student for 2013-14.

Opened in 2008, the college’s Commons building embodies Bates’ sustainable philosophy. It employs all manner of energy- and water-saving technologies, was designed to accommodate robust waste-reduction practices and even boasts a dining hall ceiling made out of wood recycled from an old Thomas Edison phonograph factory.

The U.S. Environmental Protection Agency and ReNew America are among national institutions that have honored Bates Dining for its green practices.

Founded in 1990, the Green Restaurant Association has worked to provide convenient and cost-effective tools to help the restaurant industry reduce its harmful impact on the environment. The GRA founded the green restaurant movement and is one of the pioneering founders of the green business movement as well. Learn more.