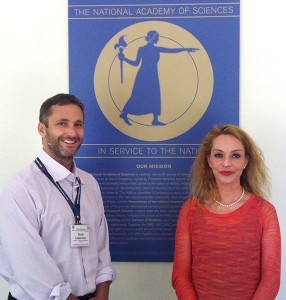 Gearing up for the inaugural edition of a joint U.S.-Israeli scientific symposium, the National Academy of Sciences scoured the land for 35 of the best and brightest young minds.

In the end, not one Bates graduate made the cut — not one, that is, but two alumni: astronomer Alicia Soderberg ’00 and geographer David López-Carr ’93.

The joint symposium was the latest edition of the long-running Frontiers of Science series, which got its start in 1989 as a way for select and promising young scientists “to see what exciting developments are going on in fields far from their own” and to give them networking opportunities with other researchers, says NAS program director Edward Patte.

Not only does the Kavli Frontiers of Science program invite only A-list young researchers who’ve already received prestigious fellowships, awards and other honors, it is also a predictor of later success. Of the approximately 4,500 researchers who have been named Kavli Fellows over the years, 136 have subsequently been elected to the National Academy of Sciences and 10 have received the Nobel Prize.

“An indicator of the effective mentorship and training they received at Bates.”

“The Kavli Frontiers of Science program is highly selective, so we are proud to see two of Bates’ talented alumni scientists receiving invitations,” said Matthew Auer, vice president for academic affairs and dean of the faculty at Bates. “Alicia Soderberg’s and David López-Carr’s recognition by the National Academy of Sciences and the Kavli Foundation is also an indicator of the effective mentorship and training they received at Bates.”

While at Bates, and with support from Professor of Physics Eric Wollman, she received funding from the National Science Foundation to join research teams at observatories in Hawaii, Arizona and Puerto Rico and to study at the Harvard-Smithsonian Center for Astrophysics. Now a recognized expert on the phenomenon of supernovae, Soderberg is back at Harvard as an associate professor of astronomy.

He also completed a minor in geology, crediting Professor of Spanish Francisca Lopez and Professor of Geology Michael Retelle for inspiring him to “investigate phenomena at the intersection of the physical and social sciences.”

López-Carr also directs UCSB’s Human-Environment Dynamics Lab, contributing to the understanding of the myriads links among population growth, rural development, forest resource use and conservation. He has authored or co-authored more than 100 scholarly publications and an equal number of conference papers. He is involved with ongoing research projects in Latin America, Africa and Asia.

The multidisciplinary project will try to uncover what is driving rapid land change and urban transition in Ghana. López-Carr will contribute research analyses of population and health surveys, connecting that information to what is shown by “multi-temporal,” or time-lapse, satellite images of changes in land use in Ghana.

His own prodigious scholarly output notwithstanding, López-Carr praises his colleague Soderberg as a “true supernova among our scholarly Bates alumni.”

Indeed, it’s been a good year for Soderberg and her studies of supernovae, the incredibly bright and energetic explosions of stars. 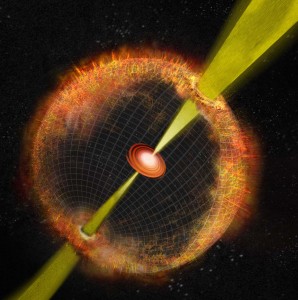 Seen here is an artist’s conception of an unusual kind of supernova that Soderberg has explored. Known as an engine-driven supernova, it emits low-energy radio waves rather than high-energy gamma rays. Illustration by Bill Saxton.

Soderberg, whose own tally of scholarly publications is also more than 100, recently received the 2013 Young Scientist Medal and Prize from the International Union of Pure and Applied Physics for her pioneering discoveries of new aspects of stellar explosions.

In 2012, Soderberg was selected as an Alfred P. Sloan Research Fellow, an award given to early-career scientists and scholars “whose achievements and potential identify them as rising stars.”

In the July issue of Astronomer Magazine, she is profiled among several “Rising Stars” in the field. Being at the fore of supernovae research, she told the magazine, means being prepared.

That’s how, in 2008, she became the first astronomer to see a star in the act of exploding.

Though the publication Nature called it “luck” (she was looking at the remnants of another nearby supernova at the time), Soderberg says that “luck favors the prepared.”

In the case of the 2008 explosion, she and her team were doing work to confirm a long-held theory that the stellar explosion marking the birth of a supernova includes a burst of cosmic X-rays. So as Soderberg was scanning the heavens on Jan. 9, 2008, and noticed a sudden X-ray burst, she knew right away what she was seeing.

The Kavli Frontiers of Science symposia are co-sponsored by the Oxnard, Calif.–based Kavli Foundation. The most recent joint program with Israel is the latest in a set of bilateral symposia that have connected young U.S. scientists with counterparts in China, England, France, Germany, India, Indonesia, and Japan for the purpose of strengthening scientific and technological collaborations.