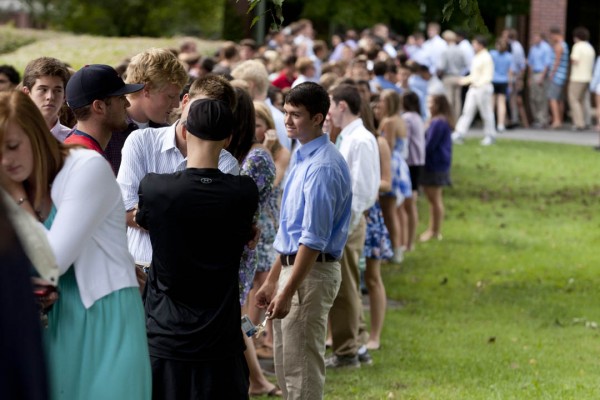 Students line up for last year’s procession to Convocation, the formal opening of the school year. The Class of 2017 will become the latest entering class to participate in the tradition. (Phyllis Graber Jensen/Bates College)

Bates will open the school year on Tuesday, Sept. 3, with its annual Convocation ceremony, formally welcoming the 502 members of the Class of 2017 — one of the most academically distinguished classes in the college’s history, and the most diverse ever.

The event, which will be livestreamed, begins at 4:15 p.m. on the Historic Quad, at Campus Avenue and College Street. Rain site is Alumni Gymnasium, 130 Central Ave.

Convocation activities open with the traditional colorful procession to the venue by faculty members and administrators in academic regalia along with students, to music provided by the Portland Brass Quintet.

Clayton Spencer, who last year became the eighth president of Bates, will open the ceremony with a welcome. Later she will also deliver the Convocation address, “Some Thoughts on Work.” The address will introduce the Class of 2017 to a question that has emerged as part of Spencer’s agenda for the institution: Can we do a better job to ensure that a Bates liberal arts education equips students with the tools they need to live and work, with passion and purpose, in today’s world?

Brent Talbott, a senior who is president of the Bates College Student Government, and Matthew R. Auer, the college’s new vice president for academic affairs and dean of the faculty, will each deliver greetings. Emily Wright-Magoon, acting multifaith chaplain, will deliver the benediction that closes the ceremony.

The Bates Office of Admission received a record 5,243 applications for the class — topping the previous record, set in 2011, by 47 — and offered admission to 1,267 of the applicants, for an admittance rate of 24.2 percent, the most selective in college history. Those who will enter represent a record “yield” rate of 39.6 percent, which colleges and universities consider very high.

Leigh Weisenburger, dean of admission and financial aid, said, “These figures reflect the constant appeal of Bates’ innovative, rigorous liberal arts curriculum, as well as our orientations to inclusiveness and civic service, for intellectually curious and deeply engaged students. We’re thrilled to have an entering class that will so strongly reinforce these values.”

Bates was founded in 1855 to offer higher education to women and students of color as well as men — a rarity at that time. It has never had fraternities or sororities, and all student organizations are open to all students. Each year at least a third of Bates students take community-engaged learning courses that integrate community projects with academic learning through the college’s Harward Center for Community Partnerships.

Fifty-eight percent of the class comes from public high schools, the rest from independent high schools. Their average grade-point achievement over the course of their high school careers was 3.8, on a scale of four.

The class is the most ethnically diverse in the institution’s history, with U.S. students of color (African American, Asian American, Hispanic, Multiracial or Native American/Pacific Islander) comprising 25.5 percent of the group.

Fourteen percent of the class are the first members of their families to attend college. Approximately 10 percent have a relative who attended Bates, a category known as “legacies.”

Geographically, the class comes from 38 U.S. states and the District of Columbia as well as 25 other countries, in these proportions:

Financial aid figures for the entering class reflect Bates’ traditional welcome to students of all family income levels. The college meets 100 percent of calculated financial aid need for all matriculants who have such need, for four years.

A record 48 percent of the class will receive need-based financial aid, with aid packages averaging $41,917 — including $38,387 in the form of Bates grant aid that does not have to be repaid. Grants from Bates keep the portion of financial aid provided by work and/or loans to approximately $3,530 per year.

Bates’ “single fee” for 2013-14 — which includes tuition, fees and room and board — is $58,950, but the college’s generous financial aid substantially reduces the average net price for aid recipients. The current White House “College Scorecard” lists an average net price for Bates of $21,402.

On average, 40 percent of Bates students graduate with federal loan debt, and they carry an average of $17,070 in loans, compared to the national average of more than $26,000.