There’s a photo of Patrick Dempsey himself, the Lewiston native and Hollywood actor, smiling McDreamily while wearing a Bates T-shirt, with a Bowdoin cap on his head and a Colby cap in his hand. 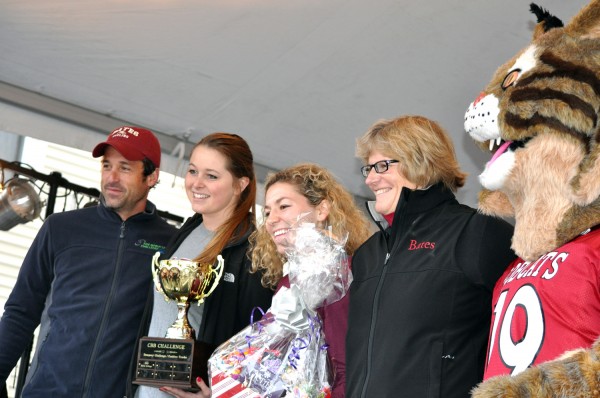 1/4
But a few months later, on Saturday morning, Oct. 12, only Bates gear was in sight as Dempsey, sporting a Bobcat cycling cap, presented the CBB College Challenge Cup to Throckmorton and President Clayton Spencer during a ceremony in Simard-Payne Park, by the Androscoggin River.

In winning the CBB participation challenge with 94 participants, Bates raised $23,300, more than triple the combined totals of Bowdoin and Colby.

Now in its fifth year, the two-day Dempsey Challenge is a run, walk and bicycle fundraising event that draws more than 4,000 participants and raises more than $1 million for the Patrick Dempsey Center for Cancer Hope & Healing in Lewiston.

Throckmorton, from Bangor, Maine, had the idea for the CBB Challenge shortly after joining the Dempsey Challenge PR effort as a volunteer a year ago.

Now that the first year of the CBB Challenge is in the books, it can be said that from a participation and fundraising standpoint, the idea was clearly a win-win.

“Patrick was calling it a ‘friendly rivalry.’ I was like, ‘Yeah…friendly.'”

But, Throckmorton admits, there was a little more to it than that, with respect to Dempsey.

“There was a pride factor there,” she laughed. “We know he got an honorary degree from Bowdoin last year, and we wanted to reclaim him.

“Patrick was calling it a ‘friendly rivalry.’ I was like, ‘Yeah…friendly.'”

Before 2013, participation from the Bates community, while significant, was never organized behind one banner. “It was scattered,” said Throckmorton.

She changed all that, with help from President Spencer, who supported a more strategic effort.

“The president was a huge facilitator to the whole operation,” said Throckmorton. “She is very competitive by nature, which everybody loves about her. This was a great way to connect with her.”

The challenge guidelines allowed any participant associated with Bates, Bowdoin or Colby to be counted, even if they weren’t part of the school’s “official” team.

Pellegrini is a co-founder of the Bates cancer support and awareness organization, ‘Cats Against Cancer. CAC did tabling in Commons and generally alerted other Bates teams to join the challenge, and the CAC challenge team raised $3,519, with another thousand more raised by club members who were part of other Bates challenge teams.

Bates’ top fundraisers were Abby Zwetchkenbaum ’15 of Providence, R.I., and Julia Gordon ’16 of Santa Monica, Calif., each of whom raised $1,650.

Altogether, the Bates teams raised about $23,300 for the Dempsey Center. Funds raised by Bowdoin and Colby pushed the total to $31,000, and matching funds from Positive Tracks, the event’s philanthropic partner, brought the total to over $60,000.

(Positive Tracks describes itself as a “youth-centric nonprofit that empowers young people to fundraise for organizations.” This year, Positive Tracks provided $100,000 to match all funds raised by Dempsey participants under age 23.)

At the award presentation, Throckmorton posed with Dempsey, who grew up in Buckfield and attended high school locally, for photos. To Throckmorton, he’s just “Patrick,” though she does toss around adjectives like “awesome” and “incredible” when speaking about him.

“He’s such a down-to-earth person,” she said, “and the Dempsey Center is such a huge asset to people who are suffering through cancer, and their family members. It’s really cool that we have that in Lewiston.”

Athletics and volunteerism work together for Nate Kellogg '09