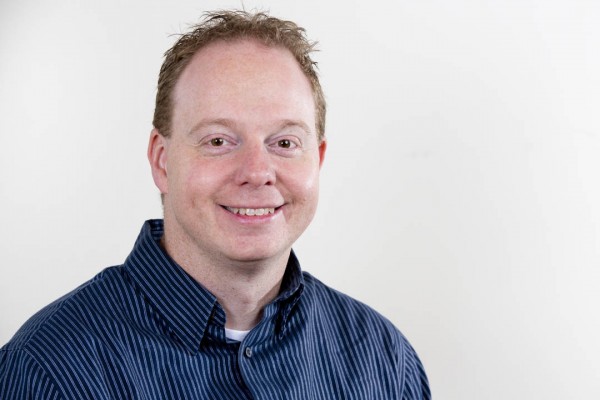 The sight of a raging giant ape on a skyscraper brings out the wise guy in most of us. But when Jonathan Cavallero first taught a class at Bates, he found that the classic film King Kong  evoked, more than anything, the intellectual spark of Bates students.

As a candidate for the rhetoric faculty, film studies specialist Cavallero made his teaching presentation in February 2013. He taught a class in Charles Nero’s course “White Redemption,” which examines movies that use the black experience to, in effect, showcase the goodness of white people.

King Kong was the topic when Cavallero led the session. Having taught at the University of Arkansas and Penn State, he had to adjust in a hurry to the smallness of the class. At the same time, he was deeply impressed by the students’ initiative.

“They did a fantastic job of linking back our discussion to the things the course had been emphasizing for the weeks,” he says.

Cavallero started as assistant professor this fall. We tend to associate “rhetoric” with writing and speaking, but schools like Bates see it broadly, defining rhetoric as the study of how people use symbolic systems — not only verbal languages — to play out their roles in the world.

Movies and television have their own symbolic systems, of course. And as moving images have conquered communications, understanding those systems is essential to cultural citizenship. The converse is also true: from King Kong to Citizen Kane to Modern Family to a one-handed catch contest on YouTube, moving images afford a powerful lens for examining society and culture.

“I’m interested in the cultural place of the movies, and how they help us think about social identities that we attached to others or ourselves,” says Cavallero — identities such as ethnicity, gender or sexuality.

“A lot of what I’m doing is using cultural studies to create a context around film” and to illustrate how films reflect or affect time, place and people. For example, in his course on Bollywood, a particular interest of Cavallero’s, students look at how Bollywood and other filmmaking centers have emulated one another in hopes of reaching still larger audiences.

“At what point do those crossovers water everything down to the point that it’s all homogenized, and you lose some of that local flavor?” he says.

“I’m conflicted because I love some Bollywood movies that are very slick and very Hollywood. They have action scenes and superheroes, and you can have a good time watching them — but I also worry about that. Because sometimes, those films can look like Iron Man, and part of the fun of Bollywood is that it’s different from Hollywood.”

Pedagogy in the multicultural classroom is another focus for Cavallero, and film builds cross-cultural connections. “Students bring in their own views and political perspectives, and they can talk about a movie with classmates who have very different views from them.”

Immersion in moving imagery gives everyone common references. “Students come in ready to participate, ready to talk, excited,” says Cavallero, who’s teaching Bollywood and film theory this fall. “As the course progresses, they’ll learn new theoretical perspectives and the vocabulary of film studies, but even in the early weeks of a class they’re pretty confident in their knowledge of the subject and they tend to be willing to jump right in.

“I’ve always seen that as an opportunity because I learn so much from them.”

Cavallero earned a doctorate in communication and culture and in American studies at Indiana University. He has taught at the University of Arkansas; at Penn State, where he earned a master’s degree in media studies; and at Indiana. He earned a bachelor’s degree in government at Georgetown University.