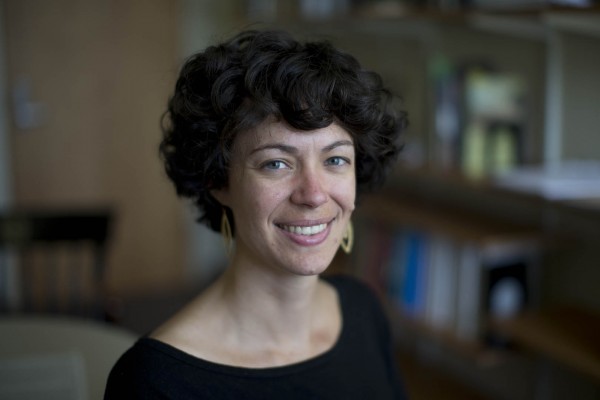 There are at least two ways to interpret a natural disaster: the scientific and the moral.

So a climatologist might explain Hurricane Sandy as the product of physical conditions in the sea and sky. But to other folks, says historian Lydia Barnett, Sandy signified something more than merely physical.

“I’m really struck by the fact that natural disasters are often given a religious or moralizing gloss,” says Barnett, an assistant professor of history who began teaching at Bates this fall.

“That’s often done by the people who survive disaster, and by pundits, preachers — all kinds of people who weigh in and try to make meaning out of something horrible: ‘Is it because God is punishing us?’

“They might not even be explicitly religious,” she says. “Just moralized. ‘Oh, people never should have built houses there, so they deserved it.'”

The discourse surrounding the slow-motion disaster that is climate change is a rich example of such moralizing, perhaps because human activity is demonstrably implicated. In contemporary blame-trading about global warming, Barnett hears echoes of centuries-old discussions of Noah’s Flood. In both cases, the moralists see a rising tide of wrongdoing finding its parallel in a literal flood.

“The idea that climate change will punish us for abusing the environment comes straight out of the Enlightenment, and out of a way of understanding natural disasters that was simultaneously deeply religious and deeply scientific,” she says. “We can talk about the natural processes that put them in place, but at the same time it’s also all about human sin and morality and God.”

For Barnett, the human response to disaster is one research interest in a diverse portfolio that is broadly defined, in her words, by “the interrelationship between the history of science, the history of religion and the history of environmental thought.”

In other words, Barnett pursues themes that span and connect regions. “I’m interested in transnational networks and conversations in the 17th and 18th centuries,” she says. In particular, she studies scholars across Europe and in the New World who shared knowledge about the Earth itself.

Barnett traces the roots of her scholarship to Oberlin, where in one semester she took courses in the philosophy of science and the history of science — an intrepid choice for someone who didn’t care for science. “Studying it from two different but nevertheless humanistic perspectives was really eye-opening,” she says.

“And the professors who taught those classes became my advisers in both departments, and I majored in both.” That intellectual experience taught Barnett the catalytic power of a liberal arts education. She says, “That style of education made me the scholar that I am because I was not only allowed, but encouraged, to make connections in thoughtful, creative and interdisciplinary ways.

“I really believe in pursuing your interests widely, taking a lot of different kinds of classes and being able to make those connections. Both for the practical aspects of developing marketable skills, but also just for being a well-rounded person and a good citizen.

“The goal of being someone who is interesting and interested is getting lost in our educational system and in our economy. But it’s actually key not just for our economy, but for our politics and for individual fulfillment.”

For example, “when students know about the Enlightenment, then they know more about the context in which the Constitution was written. And then they may be better able to understand the culture that we live in.”