By Victoria Stanton. Published on January 29, 2014

Joshua Ajamu ’14 sees things differently with a video camera in his hands.

“Coming into Bates, I thought I wanted to be a bio major,” says Ajamu, who is originally from Nigeria and now lives in Breinigsville, Pa.

When he discovered video and joined Bates College Television, everything changed. “I was spending more time editing videos than doing chemistry equations.” 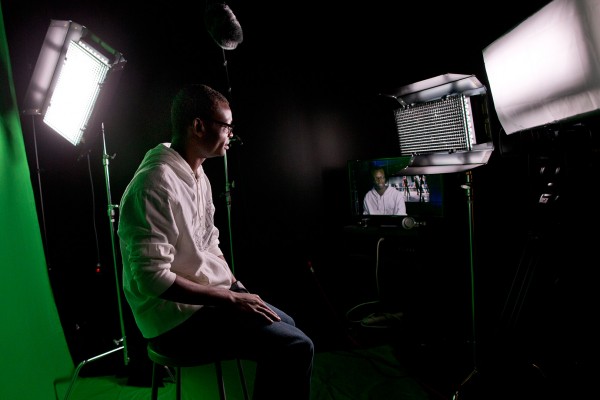 Now a rhetoric major and president of BCTV, he wants to create documentaries. “I like to speak with people and learn about their stories — who they are, what they do.”

Students like Ajamu can now tell more stories, and tell them better, thanks to Bates’ new Digital Media Studios, part of the college’s $1.2 million renovation of Pettigrew Hall.

While the story of Pettigrew’s revival has a happy ending — a celebration on Jan. 10 marked the building’s official reopening and dedication of the studios — the way this story begins is somewhat unfortunate.

Last February extensive flooding in Pettigrew displaced dozens of faculty and staff for the balance of the academic year and destroyed the college’s existing space for digital media production.

Post-flood, a steering committee of Bates faculty and staff convened immediately to assess not just the need but the opportunity that the flood had created to improve Pettigrew, a traditional mid-20th-century academic building built in 1953. 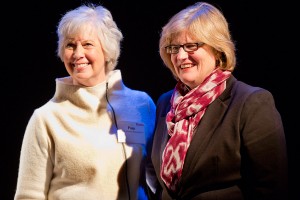 Designed by Bates faculty and staff and executed by Hebert Construction of Lewiston, the renovation was completed in time for the start of the 2013 fall semester.

Funded by philanthropy and insurance proceeds, the building updates include improved classroom and office spaces as well as departmental lounges that serve as gathering spaces for students and colleagues. The previously dark and cramped Theater Lab has been expanded and outfitted with new technology and improved acoustics.

“An unbelievably happy marriage of donor intent and institutional need.”

While the entire building got a facelift, Pettigrew’s digital production space got a real makeover.

That’s because, says project manager Chris Streifel, “there was a universal recognition of the role that digital media production plays within the Pettigrew community,” which includes the dance, rhetoric and theater departments, as well as the Bates Dance Festival. The building is also home to staff of the college’s Information and Library Services who oversee software development and implementation.

“It is an ever-changing world, and helping Bates students build the skills to navigate it is truly an honor.”

In her remarks at the January event, Reynolds, accompanied by her family and a number of Bates classmates, recalled visiting the campus for the first time with her father. Sitting in their car after meeting with then Dean of Admission Milt Lindholm ’35, her father turned to her and said, “Solid people.”

Reynolds agrees, “You can’t have a great institution like Bates without solid people.”

She went on to contrast the “simple and tidy world” of Bates in the 1960s with the rush of information and technology that follows today’s students — from personal computers in their dorms to smartphones in their back pockets.

Reynolds said, “As I look around this facility, built by a flood and a little help from me, I see that the skills developed here will present Bates students in the best light and allow them to maximize their post-graduate experiences.

“It is an ever-changing world, and helping Bates students build the skills to navigate it is truly an honor.”

The studios were designed for collaboration. A central hall connects staff offices to an iMac computer lab outfitted for group projects; state-of-the-art editing suites for audio and video; and the Multimedia Workspace — flexible and creative space for recording everything from interviews to stop-motion animation.

Though it can’t be seen or felt, the new high-speed fiber optic network may be the most critical improvement, says Scott Tiner, assistant director for digital media and event support.

“Digital media files are huge — in the gigabytes,” he says. “Students and faculty would previously have to wait five, 10, even 15 minutes to copy their files from and to a server in order to edit them.”

Now they can edit directly off the server from any location in the Digital Media Studios. 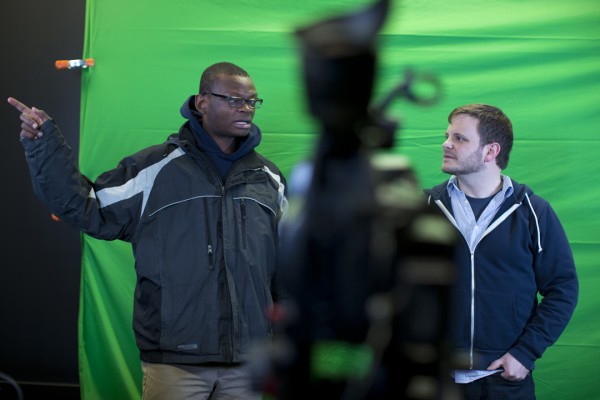 During the fall 2013 semester, 260 students used the Digital Media Studios. That’s about 15 percent of the entire campus student community. The number is only expected to grow, says Colin Kelley, Bates’ digital media specialist, who estimates the space will welcome about 1,000 different users in a year. 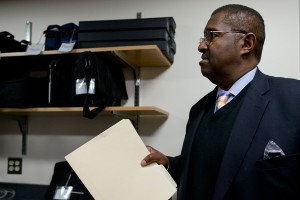 Society is in “the age of the screen” and teaching must follow suit, says Charles Nero, a professor of rhetoric who is a scholar of film as well as the written word. (Phyllis Graber Jensen/Bates College)

Society is in “the age of the screen,” says Charles Nero, a professor of rhetoric who is a scholar of film as well as the written word.

Speaking at the January dedication, Nero said that the upgrades are a “boon for us who think about how to use the screen in our teaching.” In the not-so-distant past, film students would put their ideas on paper. Now, they create video essays by editing together film clips to support their ideas, which they explain through spoken narration.

The goal is to allow students to be innovative while engaging in the critical thinking and argumentation that are hallmarks of the liberal arts.

“The facilities make it possible for students and faculty to create highly polished professional media,” Nero says. “The future uses have yet to be fully imagined.”

For Ajamu, the new resources will help him continue to develop as a videographer and storyteller.

“All my projects are fun and rewarding because I learn new and different skills in everything I do.”