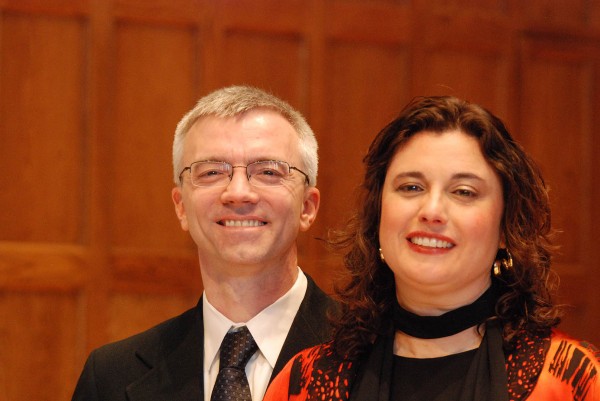 Admission is free, but tickets are required, available at bit.ly/oacbates. For more information, please contact 207-786-6135 or olinarts@bates.edu.

This performance by Levitt and Ostling showcases Eisler songs in English versions by Eric Bentley. A world-renowned playwright, poet, drama critic and cabaret singer, Bentley was the first translator into English of Bertolt Brecht’s plays and poems, introducing Brecht’s work to American stages in the 1940s and ’50s.

Now 97 years old, Eric Bentley has worked with Levitt on this program since 2011. Eisler created a vast and varied repertory, and this program presents a stunning sample of his genius and versatility. Bentley adapted the song texts, which are poems by Brecht and other master poets, from their original German into English, unlocking Eisler’s starkly beautiful songs for American audiences.

Karyn Levitt creates and performs one-woman shows. She made her Carnegie Hall debut at Weill Recital Hall in 2007 in her solo show The Age of Romance: From Vienna to Broadway, featuring works of the great composers of romantic operetta. She has performed at Goethe-Institut Boston, Shakespeare & Company, Oberlin College, the University of Massachusetts Amherst and many other cultural institutions.

Pianist and composer Ostling works in both the jazz and classical worlds. His classical works have received orchestral premieres in Louisville and Boston, and performances by the Muir and Manhattan String Quartets. A recording from his songbook of more than 60 jazz compositions is scheduled for release later this year.