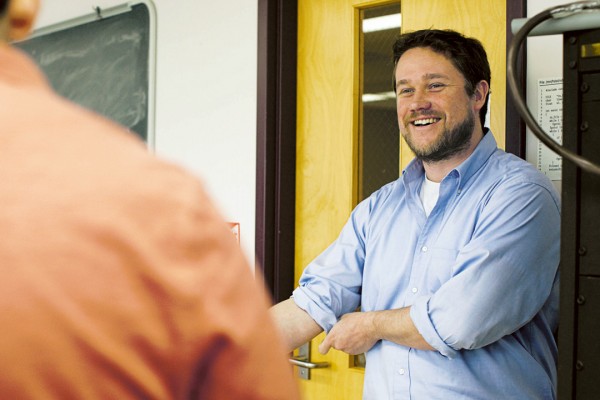 When NASA sends its new Cold Atom Laboratory up to the International Space Station in 2016, Bates physicist Nathan Lundblad will be watching it go with more than routine scientific interest.

An atomic physicist, Lundblad is one of just a handful of scientists chosen by NASA to perform research with the Cold Atom Laboratory, a refrigerator-sized apparatus designed to create the coldest known environment in the universe — one ten-billionth of a degree above absolute zero.

Lundblad, who studies atomic behavior at ultra-cold temperatures, is principal investigator for one of seven NASA research projects that will employ the new facility. Moreover, Lundblad is the only principal investigator representing an undergraduate liberal arts college in the CAL project. The seven projects will share a total of about $12.7 million over a four- to five-year period.

When Lundblad arrived at Bates in 2009, he and his students established the first apparatus at Bates for conducting this kind of research. Bates and Amherst College are the only two undergraduate liberal arts colleges in the U.S. with such facilities.

When he first learned of the CAL opportunity, Lundblad saw his way to pursue research previously out of reach, so to speak. “The idea that I proposed to NASA has been popping around in my head for some years,” he says, “but it’s virtually impossible to do in the presence of gravity.”

News of the award sent Lundblad “absolutely over the moon with delight,” he says. “I’ll have a chance to do science that I couldn’t do otherwise. I’m excited for my students, that they’ll have opportunities to do research at this level. And it raises the profile of science at liberal arts colleges like Bates to be able to participate in work like this.”

At extreme low temperatures, the familiar physical attributes of classical mechanics are supplanted by the counterintuitive and seemingly weird behaviors of quantum mechanics — under which, for example, atomic particles can resemble waves as much as particles, and a given object can be in more than one place at the same time.

Lundblad works with Bose-Einstein condensates (BECs). Named for the physicists who first postulated their existence in the 1920s, Satyendra Bose and Albert Einstein, these are ultracold clouds of gas whose atoms lose their individual characteristics and behave more like a unified wave.

Here on the planet, gravity curtails how cold an environment can be maintained in the vacuum chambers used to create BECs. Because gravity’s pull aboard the space station is so faint, the CAL will be able to reach temperatures lower than can be established in an earthly lab.

In collaboration with Courtney Lannert, a theoretical physicist at Smith and the University of Massachuetts Amherst, and David Aveline, an experimental physicist at the Jet Propulsion Laboratory, Lundblad has proposed a set of experiments to observe properties of certain types of BECs that can’t be created in Earth’s gravitational field.

“I’m interested in studying how the rules of quantum mechanics apply to a BEC based on its shape, and certain shapes are really tough to make in gravity. I’m looking to make a BEC in the form of a shell or bubble, and then study how quantum mechanics applies to a system that is two-dimensional, but without a border, like the surface of the Earth.”

At Bates, Lundblad will work with a postdoctoral researcher and with his students to design experiments for the CAL. That work is expected to begin this May and continue at Bates through 2019.

In the Lundblad lab at Bates, the apparatus for conjuring up a Bose-Einstein condensate occupies a large table covered with a mass of wires, tubing and hardware at whose heart is a vacuum chamber and a set of lasers. He and his students are accustomed to attending this machinery hands-on — a degree of control they’ll have to surrender with the CAL, which they will operate remotely, with just limited intervention by the space station astronauts.

“The astronauts aboard the ISS will be able to make small changes, but they are very busy up there. So in general the biggest challenge is running this apparatus remotely, and that’s totally different from how we do things on Earth.”