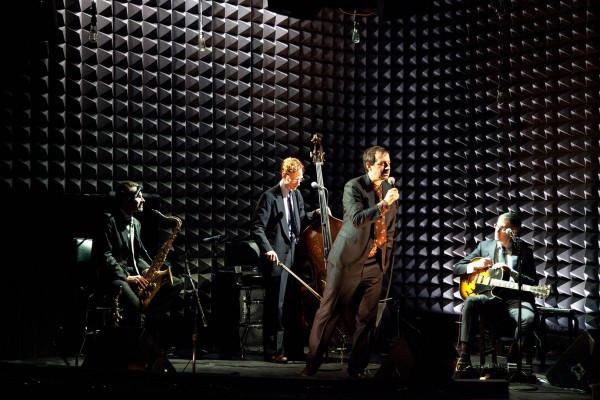 Ethan Lipton, a songwriter, playwright and performer, returns to Bates College with his Orchestra and a song cycle that The New York Times described as “one of the galvanizing theater moments of 2012” at 7:30 p.m. Friday, March 7, in the Olin Arts Center Concert Hall, 75 Russell St.

Admission is $15, available at batestickets.com. Free tickets are available for 100 students and seniors (65-plus) through bit.ly/oacbates. For more information, please contact 207-786-6163 or olinarts@bates.edu.

In the song cycle No Place to Go, Lipton plays the protagonist as the company where he’s worked for the past 10 years is moving to another planet, and he doesn’t want to go. Part love letter to his co-workers, part query to the universe, part protest to company and country, No Place to Go is a hilarious, irreverent and personal musical ode to the unemployed.

The piece is “entertainingly poignant,” wrote Village Voice reviewer Miriam Felton-Dansky. “No narrator could be more appealing than the mustachioed Lipton. It’s a strange planet we’re living on if someone this talented even needs a day job.”

No Place to Go was commissioned by the esteemed New York City nightspot Joe’s Pub and premiered at New York’s Public Theater in March 2012 in a production directed by Leigh Silverman.

Written by Lipton and with music composed and arranged by him and his trio, the show won an Obie Award and later played at Two River Theater in Red Bank, N.J., where it earned a spot on the Star-Ledger’s “Best of Theater and Opera” list for 2012. The band has performed No Place to Go in Virginia, Vermont, Los Angeles, Connecticut and at the ATP music fest in Camber Sands, UK, and will continue to tour it through 2014.

The band has been featured on radio shows such as “Weekend Edition,” “The World,” “Word of Mouth” and “Soundcheck,” and contributed to the Clash cover album Sandinista. They also play songs for and appear in the film The Shift. Lipton & his Orchestra are working on material for a sixth album, due out in 2014.

As a playwright, Lipton’s work has been seen and heard in New York City, Los Angeles, Boston, Chicago, Seattle, Edinburgh and Berne. He is the 2012-13 Playwright’s Realm’s Page One resident playwright, an alumni of the Public Theater’s emerging writers group and a Clubbed Thumb affiliated artist.

He has received an Obie Award and a Drama-Logue Award, and his play “Luther” was published in Theater magazine in April 2013. The script of No Place to Go will be published by Ugly Duckling Presse in 2014.

Levy was co-leader of the ’90s cult-favorite funk band Chucklehead and the group’s guitarist, emcee and a principal songwriter. He later led the organic/electronic funk band Ejectrode, and currently writes music for film and television.

Riggs is a bassist, composer, singer and guitarist who performs and records in and out of New York City with a wide range of artists, including Howard Fishman, One Ring Zero, Blarvuster, Hilary Hawke, Likeness to Lily, The Lonesome Trio, Giancarlo Vulcano and David Eggar.

Dieterle started performing around Chicago at age 14. He has been a featured soloist at the Burlington and Chicago jazz festivals and in venues around the country. In New York, he plays frequently with composer-pianist Joel Forrester’s band People Like Us, and he leads his own trio every Sunday at Little Branch.