Brian Kennedy, an economics major from Port Washington, N.Y., is one of two Bates seniors to receive 2014 Watson Fellowships.

Kennedy joins 42 other college students from across the country, including his Bates classmate Simone Schriger of Los Angeles, who have received this prestigious grant that supports a year of travel and research outside the United States.

Kennedy will travel to Japan, Australia, Ireland and Canada to study commercial production of marine algae and its potential for revitalizing coastal economies in the United States.

A program of the Thomas J. Watson Foundation, the Watson Fellowship supports a year of international exploration in any field for select graduating college seniors. Each fellow is awarded $28,000 for 12 months of travel as well as college loan assistance as applicable and an insurance allowance.

Recipients come from select private liberal arts colleges and universities across the U.S. This year’s 43 recipients were selected from a pool of nearly 700 candidates overall and 150 finalists.

Growing up along the North Shore of Long Island, Kennedy says, “it’s hard not to interact with seaweed — definitely my first experience with seaweed was probably just throwing it at my siblings.”

But through his Bates studies and other experiences, including a 2013 internship with Maine’s marine algae and aquaculture industries, he developed a fascination with the broad potential of seaweed and other algaes in food and fuel production.

“What fascinates me in economics is the interface between industry and natural resources,” he says.

Kennedy credits his time at Bates as key to his success at competing for the Watson. He found that feedback and support from the Watson Fellowship Committee at Bates was invaluable as he honed his application.

And, he adds, “One thing that Bates really has taught me to do is to just take my own initiative and go with that. It’s so easy to get to know the professors and other people who can help you make something happen.”

Growing up on Long Island, and later during visits to coastal towns in Maine and elsewhere, Kennedy has witnessed how market and ecological changes have harmed local economies. “Communities that I thought would boast functioning resource economies,” he says, “were changed into regions dependent on federal programs, tourism and property values.”

Kennedy believes that algae, both cultivated and wild-caught, offers a viable means of reviving coastal economies and restoring their working relationships with the ocean. Both seaweed in its myriad forms and microbial algae are relatively sustainable as crops, and relatively easy to harvest wild or to grow. 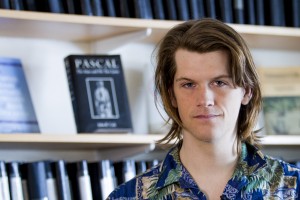 Key to Kennedy’s Watson research is the investigation of a disparity he perceives in the algae industries of Japan vs. the three Western countries. In Japan, he points out, seaweeds like kombu, wakame and nori are dietary staples that support diverse and sustainable production practices.

But the industry is less developed in Australia, Ireland and Canada. Food plays a smaller role, and industrial chemicals a larger one. Algae is the feedstock for biofuel production in Australia.

“I want to explore aquaculture and harvesting to compare production techniques, management and community impact,” he says.

In particular, he’s interested in structural obstacles — from regulations to financial practices to cultural customs — that curtail the expansion of the marine algae industry in the West.

Kennedy will interview and work beside people in every facet of the field. “I feel confident that I can build a network of communities, processors, seaweed harvesters and aquaculturists, microalgae producers and resource managers that will allow me to accurately assess the potential of algae to sustain coastal communities’ working connection with the ocean.”

He will publish his findings online and in print, notably in his own “algaezine” that will document his findings from the Watson year.

Kennedy got a head start on his algae research last summer, thanks to an internship at the Maine Technology Institute, a Brunswick nonprofit lender that funds technology companies. Assigned to look into MTI’s algae and aquaculture portfolio, he undertook interviews that gave him insight into the basic mechanics of seaweed and microalgae cultivation.