Terry Beckmann, Bates vice president for finance and administration, to retire May 30

After 15 years of service to Bates College, Vice President for Finance and Administration and Treasurer Terry J. Beckmann will retire at the end of May.

In sharing this news with the college community, President Clayton Spencer said, “Terry Beckmann transformed the way we do business at Bates. She has overseen our finances with a brilliant combination of expertise, creativity and flexibility. She and her staff have enhanced our human resources operation, expanded our facilities and created financial models that support college priorities while keeping our finances in balance. 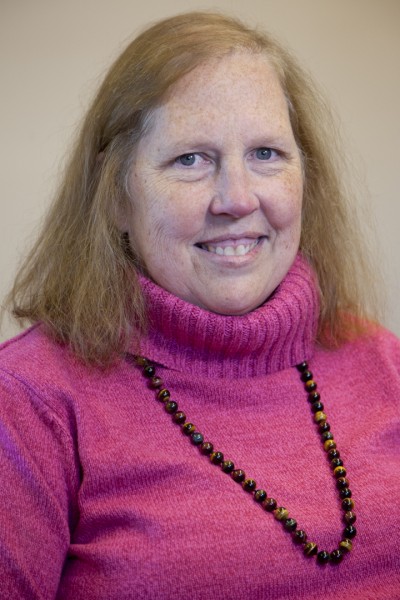 “I am enormously grateful for all that she has taught me during these past two years and for her remarkable record of service to the college.”

Beckmann’s Bates career began in 1998, and she was appointed as vice president for finance and administration and treasurer in 2003. Since then, she has overseen all business processes at the college, including financial operations, risk management, facilities and human resources.

“I love Bates and consider myself incredibly fortunate to have served Presidents Harward, Hansen and Spencer and worked with a terrific group of bright and dedicated colleagues over the years,” said Beckmann. “There is no greater feeling than to know that you have made a contribution, albeit indirectly, to enriching the lives of many wonderful students and future leaders.”

Bates Board of Trustees Chair Mike Bonney said, “As fiduciaries, the board has been able to work on the college’s behalf knowing that Terry was keeping the books balanced and the trustees well-informed.

“Her deep understanding of the college’s finances allowed us to face the Great Recession of 2008 with confidence that we could continue to advance key priorities and avoid the drastic measures so many colleges and universities were forced to take in those difficult times. We are profoundly grateful for all of her contributions over the years and wish her the very best for her life’s next chapter.”

Beckmann’s many accomplishments include instituting long-range financial planning processes and controls, giving college departments more input into the budget process, and implementing changes and improvements to the college’s human resources function. Under her leadership, Bates has operated consistently in the black.

A key figure in a number of collective institutional processes, Beckmann led the creation of the college’s comprehensive facilities master plan in 2004, a first-of-its kind review of campus facilities, infrastructure and surroundings that yielded sound information and reasonable cost estimates to guide future development. 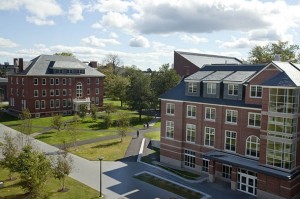 The renovated Roger Williams Hall (at left) and Hedge Hall: The project “I am proudest of,” says Terry Beckmann. (Phyllis Graber Jensen/Bates College)

In subsequent years, she collaborated closely with faculty and staff toward the development of several major construction projects, including the new dining Commons, 280 College Street residence hall, Alumni Walk and renovation of Hedge and Roger Williams halls.

“I am proudest of the Roger Williams and Hedge project,” said Beckmann, who co-chaired the planning committee with Jane Costlow, the college’s Griffith Professor of Environmental Studies. “It typified the most rewarding part of my work: the opportunity to work collaboratively and closely with colleagues across the college on shared issues and projects.”

Beckmann is also proud to have steered Bates through the Great Recession with no staff layoffs, unlike many peer colleges.

Most recently, Beckmann led the college in its first-ever credit-rating process, earning an A1 rating from Moody’s Investors Service. A strong rating was key to the successful bond issuance that finances the forthcoming construction of two new residence halls on Campus Avenue.

Beckmann graduated from Mount Holyoke College in 1978 with a bachelor’s degree in mathematics and went on to Pace University for an M.B.A. in accounting. She then began a 34-year career in which she has worked for just three employers. After 11 years with Arthur Andersen as a senior audit manager, she made her move to academia as chief financial officer for Concordia College in New York, before coming to Bates in 1998.

Beckmann plans to take the summer off before starting her next chapter. Looking ahead, she envisions working in another nonprofit environment with a strong mission about which she can be passionate, she said.

Upon Beckmann’s departure, Director of Accounting Natalie Williamson will serve as interim treasurer of the college, and Mary Main, Doug Ginevan, Christine Schwartz and Heather Taylor will continue in their current roles, reporting to the President until a new vice president is appointed.

Meanwhile, the college will move quickly to form a committee to assist in the search for Beckmann’s successor.

Slideshow: Not your traditional ‘Antigone’