It’s not unusual for a guest speaker to visit one or two Bates classes.

But when author and entrepreneur Thomas Goetz ’90 came to campus on April 28, he visited five Short Term classes prior to his evening talk. 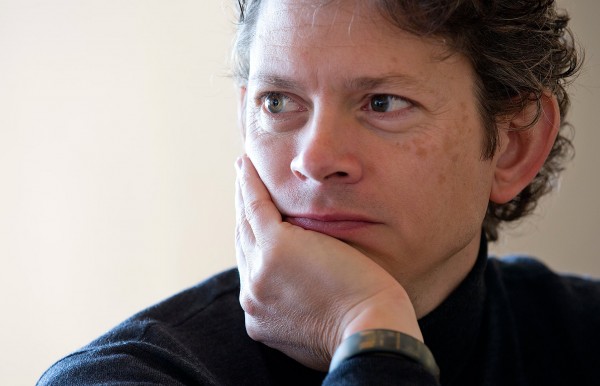 Thomas Goetz ’90, photographed by Phyllis Graber Jensen during his visit to campus on April 28.

Speaking with students in Bates’ four new practitioner-taught courses (courses taught by experts outside the faculty), Goetz riffed on graphic design, healthcare administration, social activism and digital innovation. A kind of Renaissance man for the digital age, he also joined a biology class on emerging and reemerging infections.

On campus to join Short Term’s ambitious Purposeful Work+ programming, Goetz has scrutinized humanity’s dance with information technology since the early Internet Age, and that’s why he could move easily from classroom to classroom during his Bates visit, making varied and relevant contributions each step of the way.
Purposeful work is a college-wide initiative built on the premise that preparing students for lives of meaningful work lies at the heart of the liberal arts mission. When fully developed it will include: (1) a co-curricular program involving cycles of exploration, reflection, and skill-building; (2) practitioner-taught courses during short term, and (3) a highly-structured Bates-specific network of internships, with the hope to guarantee every Bates student a paid internship that is either employer- or Bates-sponsored.

In 1998, he founded one of the first Internet blogs, BubbleEconomy.com, publishing each post by hand-coding HTML at dawn.

Later, as executive editor of WIRED — a magazine dedicated, like Goetz himself, to helping us understand what technology means now and potentially will mean — he led the publication to more than a dozen National Magazine Awards.

A few years ago, when he wanted to make a contribution to the field of healthcare, he pursued a master’s in public health at UC–Berkeley to get specific training.

Co-founder of the startup Iodine, Goetz is now Entrepreneur in Residence at the Robert Wood Johnson Foundation, an appointment praised as “a good get” by Forbes.

His current book, The Remedy, called a “beguiling real-life medical detective story” by Kirkus Reviews, explores the 19th-century origins of the germ theory of disease and the quest to identify and cure tuberculosis. In 2010, the Wall Street Journal named his debut book, The Decision Tree, a Best Health book.

Below is a look at his whirlwind day on April 28, and some of the ideas and insights he shared with Bates students and faculty (after which, by the way, he headed to Chicago to join President Clayton Spencer for a discussion about technology in higher education).

Loading up on oatmeal in Commons, Goetz speaks of his start-up, Iodine: “We are a lofty seven people.” Iodine is dedicated to improving patient health choices and outcomes through sophisticated information technology. Says Goetz:

Technology is good at two things: One, it’s good at scale, so it gets cheaper and cheaper and therefore gets easier and easier to reach larger numbers of people. The other thing that it does is make it possible to distribute things really cheaply on that network. 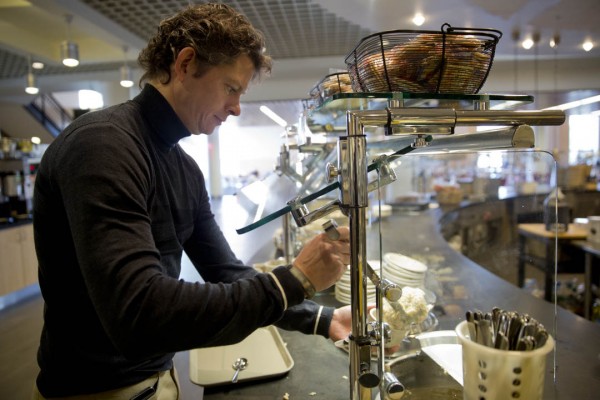 Goetz listens to a glowing introduction by Professor of Sociology Emily Kane,  who has led the development of the new practitioner-taught Short Term courses this year. “The reason I’m here,” Goetz said, “is because of the enthusiasm of your emails.” 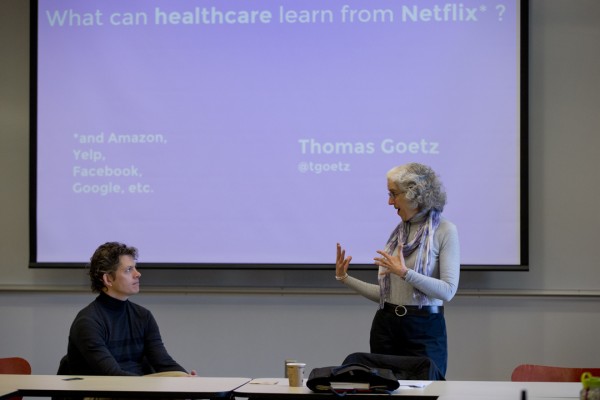 Goetz describes the importance of graphic design to healthcare delivery:

That emotional shift is much more powerful than any clinical measure, and it is really only possible because of design. That’s what we should be demanding of our healthcare system — not just taking care of us by the numbers, but taking care of us as people. That’s the power, that’s the capacity of good design, to really give people a new emotional experience, a positive engagement with their lives. 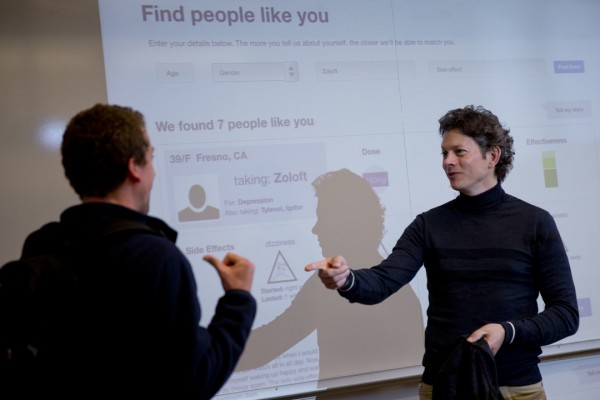 Goetz and Kane head to lunch with Matt Auer, dean of the faculty and vice president for academic affairs. Of his far-ranging work Goetz says, “I try to help people understand complicated things that are important to their lives.” 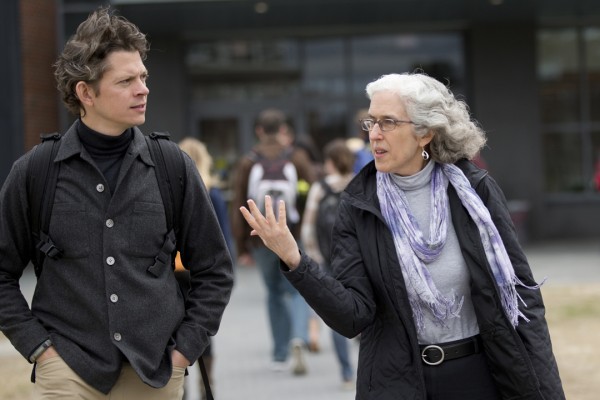 Goetz connects with Auer over lunch to talk about innovations in teaching and learning:

An idea — an innovation — moves from a science to a technology to an industrial or business application to a social application. So it’s this pathway from invention, to technology, to industry, to society. And that trajectory, that progression, offers a lot of opportunities for observing the impact of an invention or a discovery — depending on what phase it is in. The challenge is you want to be telling the right story at the right time. 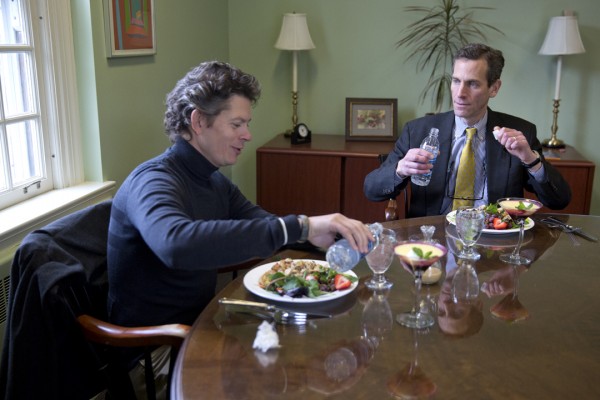 While visiting Karen Palin’s biology course on emerging and reemerging infections, Goetz provides some historical context for the ever-growing scientific knowledge about infections and disease:

One of the most important things about science that I’ve learned is that science is constantly replacing one body of knowledge with a new body of knowledge. We have perfectly good explanations for how the world functions now that are wrong. We don’t know what those are, but they will be replaced. 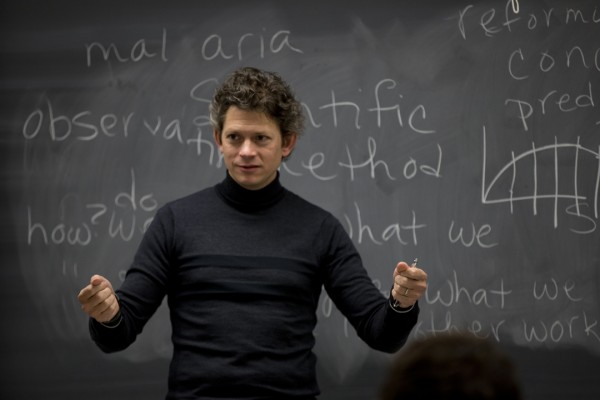 Americans’ risk of death from infectious disease has gone down but deaths from suicide and drug abuse have increased. If there is fundamental unhappiness in people’s lives, Goetz offers an answer:

One of the antidotes, I think, is community and feeling that people are a part of something. The traditional architecture of communities and relationships has dissipated in these last 25 years. Whatever you are engaged in — whether it’s the environment or mental health or immigration — to me, all of these are tasked with the greater responsibility of trying to provide something in people’s lives that makes them less unhappy and makes them feel more part of something and more connected to other people. 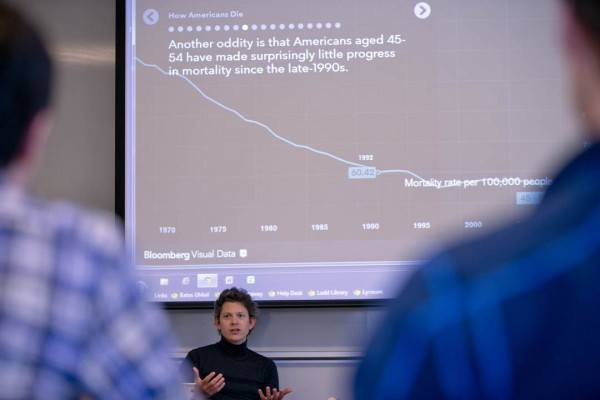 “True optimism,” says Goetz, “has more impact than any $2 million gift.” Here he speaks with Gideon Ikpekaogu ’17 of Abuja, Nigeria, after visiting with students in the practioner-taught course Social Change Organizing and Advocacy. 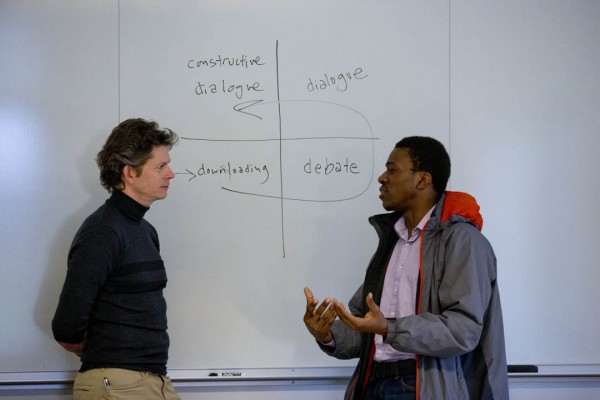 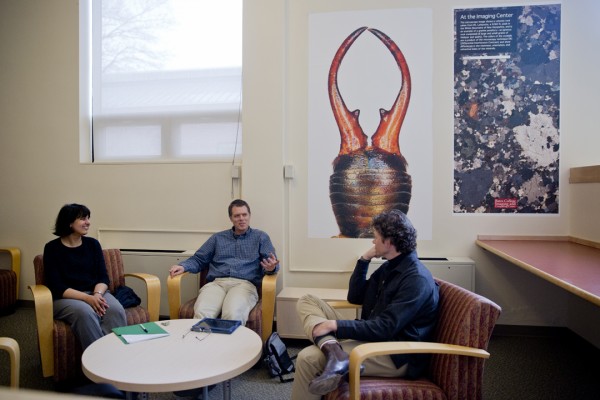 Enjoying a respite, Goetz dines with Bates faculty and staff.

Technology is a proxy for connections we all already otherwise want. So Facebook, social networking, Twitter — these technologies are not letting us do anything different from what we already were doing as a society. It just lets us do it more efficiently and without physical proximity. We have always wanted to have friends and always want to connect and have conversations.

But the technology gives us the capacity to do those in a distributed form. So now instead of having the network of six friends, we now have 600 friends. My point is, those technologies are not giving us something different, they’re serving the same social function. 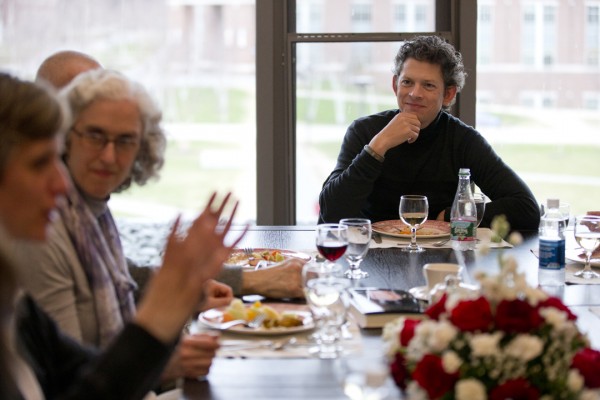 Goetz searches for himself in a photo from a 1989 event in which Edmund S. Muskie ’36 met with students before a meeting with other former secretaries of state. Though not pictured, Goetz remembers attending. 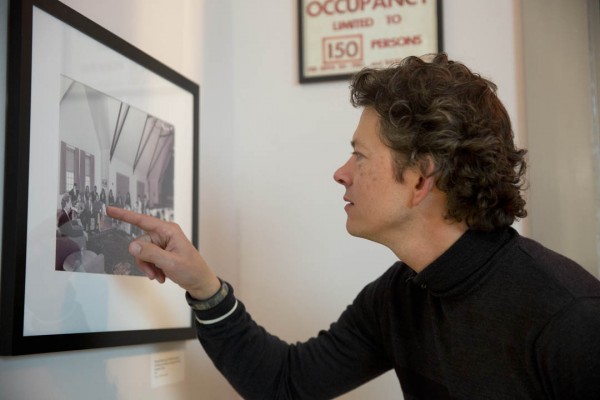 In the mid-19th century, the average lifespan was 36 years in the U.S. and Europe. Today it’s 80. But more than lifespan, the better metric to compare is the number of fatalities, just the sheer constancy of death.

At the time, the death rate was about 2 percent of the population. That’s a staggering amount of people dying every year, about five times the rate at which we die today. Death and disease were a constant and routine part of daily life that they’re not today — because it didn’t just happen at the end of life. It happened throughout life, and it happened for reasons that people couldn’t fathom. 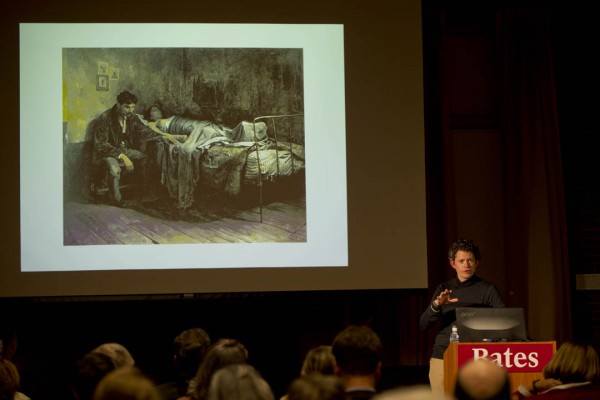 Goetz signs a copy of his book for Lee Abrahamsen, associate professor of biology, following his talk. The next day, he was off to Chicago to join President Clayton Spencer for a discussion about technology in higher education. 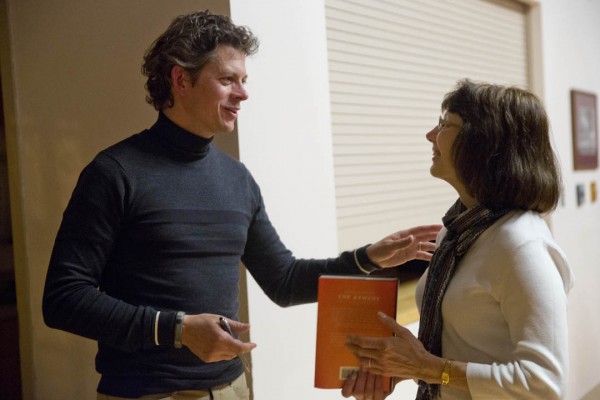