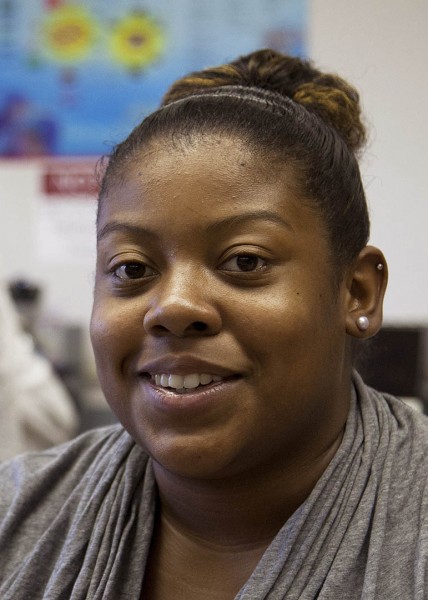 A Bates senior from Seattle, Destany Franklin has received the Maine Campus Compact’s Heart and Soul Student Award for her work with the Hillview youth program in Lewiston.

Franklin received the honor during Maine Campus Compact’s annual awards ceremony at the Maine State House on April 30. She was one of six college students in Maine to receive the Heart and Soul award, which recognizes exemplary civic engagement that demonstrates innovation, flexibility, foresight, and the ability to lead, inspire and engage.

The Lewiston Housing Authority’s Hillview is a low-income housing project with a robust youth program. Franklin became involved with Hillview as a summer fellow following her first year at Bates. For the past three years, she has served as a coordinator, grant writer, curriculum designer and mentor for Hillview pupils.

Franklin “has a tremendous way with the youth at Hillview. They have a great amount of affection for her, but also a deep respect,” says Ellen Alcorn, assistant director of community-engaged learning at Bates’ Harward Center for Community Partnerships.

“She is able to create engaging activities for them, to demonstrate her deep concern and regard for them, and set clear boundaries in a way that is simultaneously firm and compassionate.”

Franklin is majoring in neuroscience at Bates and minoring in education studies and sociology, and plans to practice neurologic physical therapy after graduation. On campus, in a variety of leadership roles, she engages her peers in conversations about social justice, poverty, racism and classism.

She is a Bates Bonner Leader, part of a national network that promotes opportunities for student development through community work. Franklin is also an AmeriCorps member and from 2011 to 2013 was co-president of Amandla!, a student organization addressing the cultures and issues facing people of the African diaspora.

What’s in a Name: Montello