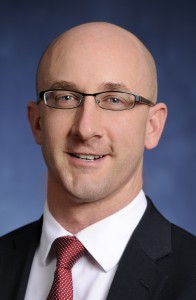 Joshua McIntosh becomes vice president of student affairs and dean of students at Bates on Aug. 1. (Will Kirk/Johns Hopkins University)

“I am so pleased that Josh will be taking on this crucially important role at Bates,” Spencer said. “He is an exceptional organizational leader whose creativity and commitment to students have made him enormously effective and highly regarded everywhere he has served. Josh’s energetic and collaborative style will be invaluable as we work to bring greater strength and cohesion to the overall student experience at Bates.”

“I am thrilled to be coming to Bates at this very exciting time,” McIntosh said. “I enjoyed meeting with students during my recent visit, and I am eager to work with them and with colleagues across campus on the broad range of issues and opportunities of a residential liberal arts college. The Bates culture — built on a history of inclusivity and diversity — offers powerful opportunities in student life. For me personally, Maine is also a strong draw as I have longstanding family ties to the state.”

In his new position, McIntosh will play a leading role in shaping the student experience and campus culture. He will be a member of the president’s senior staff, and an important priority will be working with faculty to knit together more closely academics and life outside the classroom.

McIntosh is currently the dean of academic services at Johns Hopkins, where he oversees seven departments, including the registrar, student disability services and multicultural affairs. He has previously held management and leadership positions at Harvard and Syracuse universities.

“The Bates culture — built on a history of inclusivity and diversity — offers powerful opportunities in student life,” McIntosh said.

McIntosh will lead a staff of approximately 45 in the Dean of Students Office – a team that oversees, among other things, student life, the residential program, off-campus study and campus security. The office also plays a vital role in helping students strike a balance between the intellectual rigor of the classroom and their co-curricular pursuits.

At Johns Hopkins, McIntosh led investment in programs designed to better support first-generation students and low-income students. He and his team also used information technology to facilitate data-driven decision making; he led the development of a plan to deepen and broaden student engagement with public service; and McIntosh helped lead an initiative to generate new support for social entrepreneurship and innovation. Prior to Johns Hopkins, he served at Harvard and Syracuse in the areas of residential life, housing, assessment, fraternity and sorority affairs, student activities, policy, finance and human resources.

McIntosh’s appointment as vice president for student affairs and dean of students follows a national search conducted by a committee composed of faculty, students and staff and chaired by Associate Professor of Medieval Studies Margaret Imber. The search included broad outreach to the campus community as well as visits and open forums by three finalists.

McIntosh was born in Lexington, Ky., and received his undergraduate degree from Elon University in North Carolina. He has a master’s of arts in college student development from Appalachian State University and a doctorate in higher education administration from Syracuse University. McIntosh will be joined in Maine by his partner, William Lumpkin, an associate professor of music and artistic director of the Boston University Opera Institute.

McIntosh succeeds Tedd Goundie, who stepped down on May 31 after 10 years as dean of students. Stephen W. Sawyer, associate dean and director of the off-campus study program, is serving as acting dean of students until Aug 1.

‘Community and connection’ are what’s in store for the arriving Class of 2019 on Aug. 31