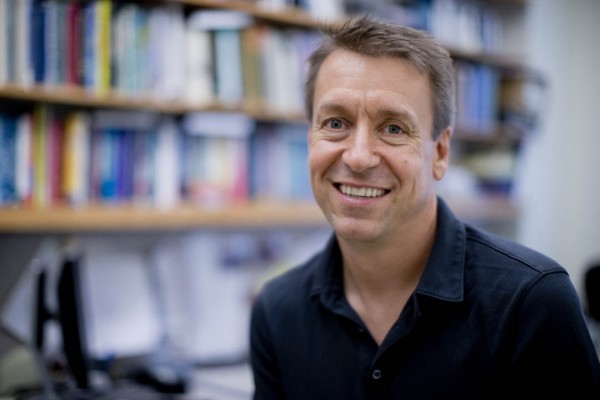 Todd Kahan, a Bates psychology professor who studies how people process visual information, has received a prestigious award that will allow him to explore how cultural differences affect those processes.

A cognitive psychologist, Kahan this fall begins an academic-year sabbatical dedicated to the visual perception study. He has received a James McKeen Cattell Fund Fellowship that allows him to extend his sabbatical time to encompass research in both the United States and Australia.

In recent years, only two to four researchers annually have received the fellowship. Most recipients are affiliated with major research universities, not small liberal arts schools like Bates.

Learn more about the Cattell fellowships.

Researchers once thought that because all humans have the same physical apparatus for eyesight, visual perception didn’t differ between individuals or across cultures. “But we now know that’s just not true,” says Kahan (pronounced kahn).

A growing body of research indicates that cultural or experiential differences cause disparities in visual processing. For instance, looking at the same series of images, people from East Asian cultures are more likely to spot changes in the background of a scene, where Westerners tend to notice changes in central objects.

Visual perception comprises a crossfire of cognitive processes that the brain harmonizes into the mental image of what we see. Color, motion, edges of shapes and other factors are processed in different areas of the brain — and the brain also seeks to relate the new information to what already lives in our memories, such as a lifetime of cultural experience.

Kahan’s research will focus on timing. “What really interests me is, where in the visual information processing stream does culture seem to exert its role?” Kahan says. “Is that happening only late in visual perception, after an object representation has been formed, or is it at the earliest stages of vision?”

Until recently, researchers haven’t been able to make much progress with that question. “It’s really difficult to try to figure out where in the visual processing stream this is happening,” says Kahan.

But he and his research partners have developed certain visual illusions, presented on computer screens to participants in his research, whose results can be correlated with specific phases of visual processing and may pertain to cultural experience.

During his sabbatical, Kahan will explore how well those illusions actually do correspond to cultural influences on visual perception. He will run comparative perception experiments, based on the illusions, using participants from different cultures — in this case the U.S. and Australia, where he will work with Paul Dux, an associate professor of psychology at the University of Queensland.

“Definitely, your life experiences do shape the way you attend to the world, and they do influence visual perception,” Kahan says. “But I think researchers have tended to stop there. Our group is the only group that I know of where we’re trying to pinpoint where in the visual processing stream this is occurring.”

Broadly speaking, Kahan’s research investigates the mechanisms of paying attention to, perceiving and remembering the incalculable amounts of visual information that life presents. “Attention, perception, memory and language are so highly interconnected they are often hard to disentangle,” Kahan says.

Kahan, who chairs the Bates psychology department, joined the college in 2002. Among the topics he teaches are sensation and perception, cognitive psychology, the psychology of language, and cognition in insects, birds and mammals other than humans.