‘Your job is to discover and learn,’ Convocation speaker Matt Auer tells Class of 2018

The days are long gone when the phrase “Here be dragons” on a navigational chart warned captains away from unknown and perilous waters. 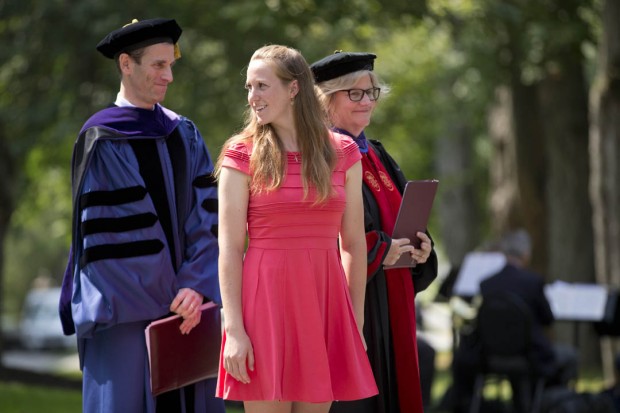 At Bates, though, “the professor-navigator knows where the dragons are and…might actually lead you into them,” Matt Auer told the college’s Class of 2018 during Convocation on Sept. 2.

And that’s good because, in fact, there be things you can learn from the dragons.

“The whole dragon question is about probabilities, choices and moments where you have to decide how to proceed in the absence of complete information,” said Auer, vice president for academic affairs and dean of the faculty.

“Bates’ navigators can help you think through the risks and benefits. But at the end of the day, and the days are short here in the winter, it’s your analysis and it’s your decision.” And learning to make such decisions, and to own the results, is one of the greatest rewards.

Likening the Bates experience to a voyage of discovery, Auer’s address was the centerpiece of the midday ceremony. Also addressing the assembly on the Historic Quad were Acting Multifaith Chaplain Emily Wright-Magoon, Student Government President Alyssa Morgosh ’15 and college President Clayton Spencer, who opened Convocation with her remarks.

Convocation video, including address by Dean of the Faculty Matt Auer:

Spencer’s welcome looked at the ways Bates practices the concept of community. She quoted feminist writer Bell Hooks: “We need to work against the danger of evoking something we don’t actually practice.”

What does it mean to “actually practice” community? For one thing, Spencer said, “it means actively struggling against the powerful human tendency to divide the world into ‘us’ and ‘them.’” 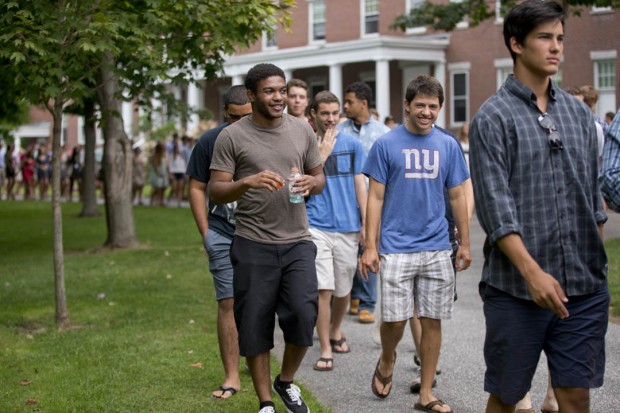 For another, it means to seek out our common humanity, to approach each encounter with openness toward and respect for the other. “If you do this consistently,” Spencer said, “you will find that you have the solidarity and support of community not only in the good times, but also in times of worry and anxiety, regret or longing.”

In greeting the 498 new kids on the Quad, Morgosh used her own Bates experiences to exemplify and amplify Spencer’s theme. From the upperclassmen who walked her through a chemistry problem-set in her second week at the college to the alumna of the Class of ’49 who celebrated the friendly Bates greetings that prevailed in her day and still do, Morgosh sketched out the human virtues that, she said, “make Bates an incredible place.”

Titled “Hoisting the Mainsail at Bates,” Auer’s convocation address was rich with shouts-out to faculty and students doing exemplary academic work. He began with a quick look at #batescollege on Instagram, whose images reflect adventures both recreational and academic — such as a Short Term in London, led by professor Sanford Freeman, that Auer described as a “period of very intense and concentrated discoveries.”

“Deep learning and truly transformative discoveries sometimes require you to slow down.”

That’s what Bates is about, Auer said, going on to explain the Bates voyage of discovery with metaphors from the Age of Discovery, an era that revealed much of the world to European explorers in wind-powered ships.

Bates faculty, he said, resemble both navigators and lookouts— with some notable differences from their antecedents in history. For instance, there’s that dragon thing. And the lookouts may want to bring you closer to those icebergs that the Titanic should have avoided, because now more than ever, in this age of climate change, icebergs have much to teach us.

And unlike the navigators of old, Bates faculty often want students to take the long way around, Auer pointed out. “Deep learning and truly transformative discoveries sometimes require you to slow down.”

It was with one last nautical metaphor that Auer hove to. What kind of ship are we sailing, anyway? A schooner, he said. And the schooner is a beautiful ship — but that beauty is a community project. “It’s hard to find idle hands or deck chairs. Everybody has a job to do. Your job is to actively discover and learn.”

Wright-Magoon steered the nautical theme into more spiritual waters to conclude the ceremony. French author André Gide once wrote that “one does not discover new lands without consenting to lose sight of the shore for a very long time.” But, Wright-Magoon said, to look beneath the surface of that seemingly featureless sea is to discover a new world of connections and resources that may leave us feeling less isolated and alone.

Wright-Magoon concluded, “Even though our journey is unclear, we have fellow travelers beside us. Let is set sail, confident that safe harbors will be found in the company of each other.”

10 pieces of advice, for all of us, from a wisdom-filled Bates College Convocation