More than 96 percent of Bates students complete a senior thesis.

What exactly goes into a thesis, however, is different for every student. For theater majors Gunnar Manchester ’15 and Jonathan Schwolsky ’15, senior thesis involves both putting on a challenging production and exploring their own creative and intellectual process in writing. 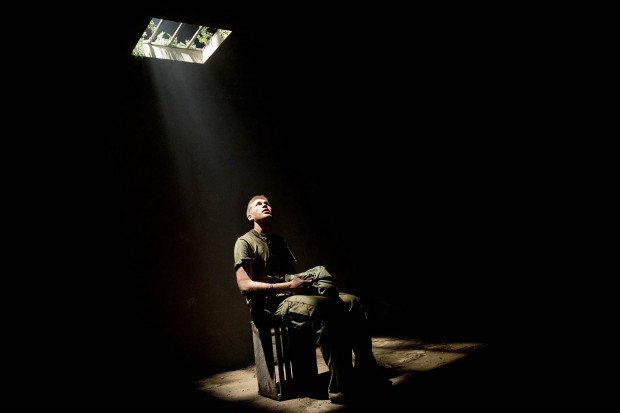 For Manchester, the character of Joe in Wasteland presented a challenge. Though he has extensive experience in theater at Bates, “Wasteland,” he says, “is unlike anything I’ve ever done before.”

Although the cast comprises two characters, Manchester is the only actor to appear on stage throughout the 90-minute play. He plays a politically liberal POW during the Vietnam War who, at the start of the play, has been alone in an underground cell for six months. Then another American soldier, the conservative Joe Riley, is placed in an adjacent cell.

Although Joe (and the audience) never sees Riley, he hears his fellow prisoner’s voice through a vent in the wall. Riley is voiced by Psychology Assistant in Instruction Brian Pfohl, whose lines will be amplified through a speaker in the “vent” as he delivers them offstage. As two years go by, Joe and Riley develop a bond despite their drastically different backgrounds and ideologies.

While Manchester has been heavily involved in theater at Bates, he has most often worked in comedy. He is a leading member of both the Strange Bedfellows, Bates’ improvisational comedy group, and the Robinson Players, Bates’ student theater organization. His role in Wasteland is more dramatic and deals with, amongst other things, political division, war, loneliness and despair.

However, he notes that the play sends a message that humor and hope can help, “no matter how dark things get.” He says, “You’ve got to keep hope going,” he says. 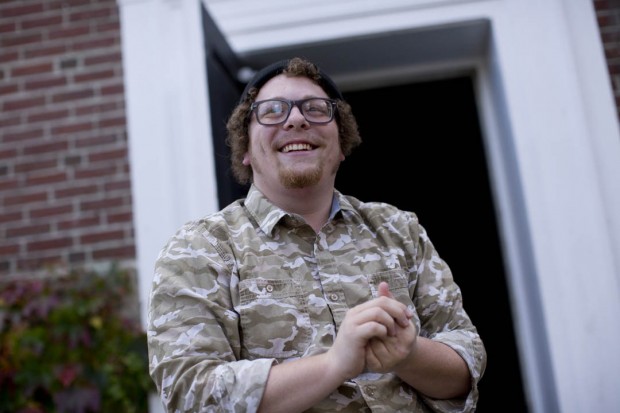 For Schwolsky, the challenge of directing a senior thesis production is an opportunity to collaborate and experiment. In Boxing 2000, a young man, Freddie (Will Dunbar ’15), pursues underground boxing with the help of his older brother JoJo (Alex Moscovitz ’16).

The play uses boxing culture as the framework for a discussion about masculinity and community. As director, Schwolsky sought actors who would bring in their own ideas about the play. “The director is not the one in charge, but the one with the vision,” he says.

“Anyone can see this show and come out thinking something different.”

Schwolsky also feels a personal connection to the boxing culture in the play, a culture he says is very much present in his part of New Jersey. To prepare for the production, he attended an amateur boxing match and talked with people in the Boonton, N.J., boxing community.

Last spring, Schwolsky read 14 plays by Maxwell to prepare for his thesis. He was drawn to the colloquial language and universal message in Boxing 2000. Maxwell himself directed the original production of the play with the goal of mimicking reality as closely as possible. His actors spoke simple, often mundane dialogue in monotone.

As he directs the play, Schwolsky hopes to take inspiration from Maxwell’s vision and expand upon it with his personal vision. He collaborated with professional set designer Simon Harding to design the unusual two-tiered set. The audience will sit around and look up at a 5-foot-tall square platform in the center of the theater, where the action will take place.

Schwolsky hopes that Boxing 2000 will affect each audience member differently and make them ask questions about their own lives. “Anyone can see this show and come out thinking something different,” he reflects. “And that is fascinating to me.”