If you want a hint as to why Bates will eliminate student mailboxes, look no further than the example of Noah Morasch’s coffee cake.

Morasch, a first-year student from Vancouver, texted his mom on a recent Sunday asking if she’d bake him a coffee cake.

After an auto-generated Bates email informed Noah that “you have a package ticket in your mailbox,” he visited his Chase Hall mailbox to pick up the yellow ticket, which he used to claim the cake at the college’s Package Center.

Noah’s mailbox, you’ll notice, was barely a bit player in this transcontinental transaction. He used it only to retrieve the package ticket. The actual package, his ultimate destination, was a few hundred steps away at the Package Center. 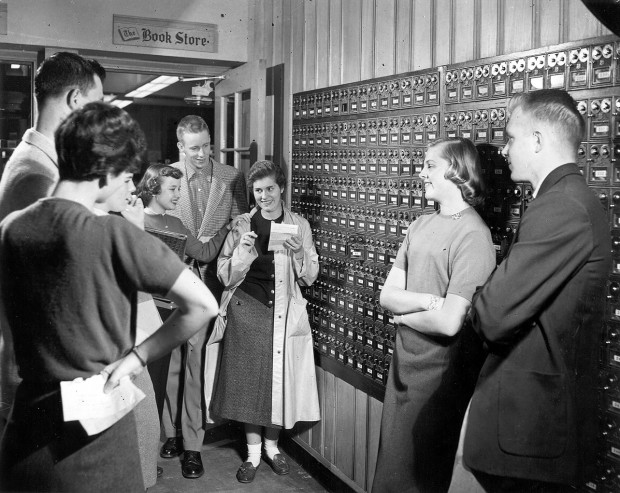 Getting a letter was the big thing a generation or two ago. Now, it’s packages, which is why Bates will phase out its physical mailboxes by 2016. (Photograph courtesy of the Edmund S. Muskie Archives and Special Collections Library)

That’s the point, says Laurie Henderson, director of Bates Office Services. “From what we know of our students, we see no downside of getting rid of mailboxes.”

By 2016, perhaps sooner, Bates students will still have mailbox numbers, but no physical boxes.

2016 is when Office Services will pack up its shipping, print and package operations, now spread across Chase and Lane halls, and consolidate them on the ground floor of a new building at 65 Campus Ave., one of two new student residences planned along that street as part of the Campus Life Project.

The new office will have bells and whistles, but no mailboxes. Students will arrive and scan their IDs, which will alert the staff to bring the student’s mail, packages as well as letters and magazines, to a service counter.

Henderson estimates that Bates will save around $64,000 by not installing mailboxes in the new mail center.

Sarah Keith ’18 of North Andover, Mass., is with Morasch as he’s retrieving his package slip. She’s asked if it makes sense to eliminate the mailbox step of getting packages. She ponders the question, but only briefly. “It would be a lot easier.” 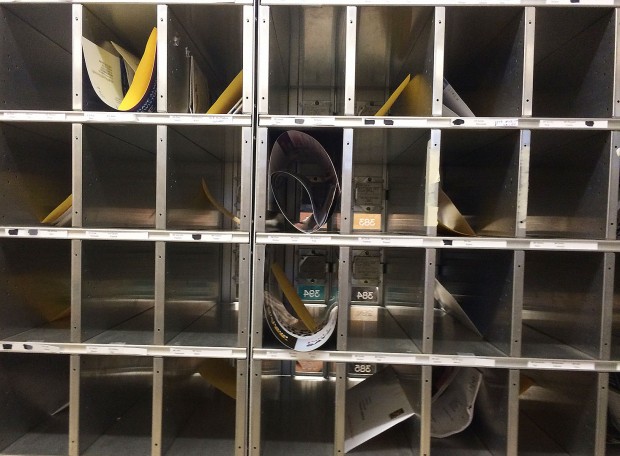 With the move, Bates joins just a handful of U.S. colleges that have eliminated physical mailboxes in favor of the one-stop, package-center approach. Lehigh and Loyola have similar systems.

While all colleges have adapted their mail centers to accommodate the growth in package volume, few have done away with mailboxes altogether — yet.

“Schools that have the opportunity to create merged spaces in the next 20 years will consider this as a real option,” she predicts.

The extinction of Bates student mailboxes represents a stunning fall from their once-lofty place in college life. They were enchanted spaces from which mostly good things flowed: letters, newsmagazines and postcards.

But their demise is not surprising. Mailboxes can’t handle most of what students get these days: packages and more packages. 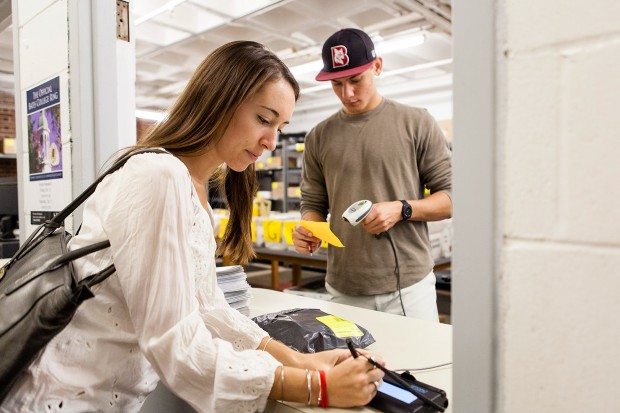 “There’s been an explosion and a shift,” says Henderson. Since the mid-2000s, “we’ve seen growth of between 5 and 14 percent per year in package volume. We don’t know when or if that trend will drop off.”

Not anytime soon, apparently. A 2010 report by the Boston Consulting Group for the U.S. Postal Service predicted 40 percent growth in package volume by 2020, “driven by overall growth in business-to-consumer e-commerce.”

That all means people these days are very comfortable receiving and shipping packages. In fact, when Lisa Morasch baked the coffee cake, she knew which of her pans would fit the cheapest flat-rate USPS box.

Until a few years ago, mail and package deliveries went to the small, 376-square-foot room right behind the student mailboxes. One day, Henderson and a colleague were crawling over and around all the packages, and the colleague fell. “That was it,” said Henderson.

Luckily, that was when Dining Services had left Chase for new Commons, so Henderson and her team snapped up a former recycling room, conveniently located off a loading dock, and turned it into the Package Center. 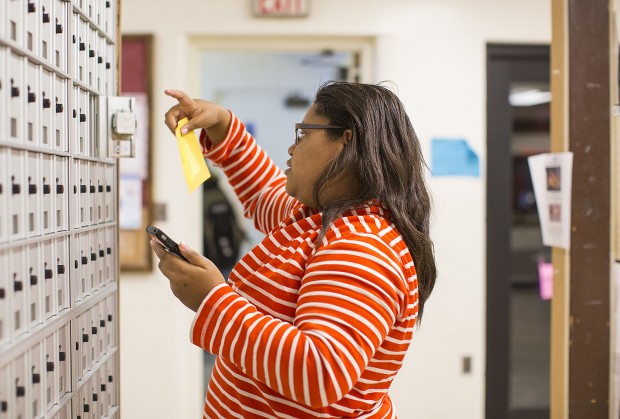 Jacqueline Cooper ’17 of Chicago pulls a yellow slip from her Chase Hall mailbox alerting her that she has a package awaiting her in the Package Center. Her prize? A DVD of “The Great Gatsby” that her mom sent her. (Phyllis Graber Jensen/Bates College)

The system spits out two tracking labels. One gets affixed to a card that’s put in the student’s mailbox and the other is put on the package, which is placed in a section of the room according to the student’s last name. An email notice goes to the student.

As package volume has grown, the sole reason mailboxes ever existed — to hold first-class and other time-sensitive print mail — has practically disappeared.

Traditional letter mail has dwindled to next to nothing as person-to-person and business-to-consumer communications have moved online.

Today, Bates students receive around 32,000 packages each year (“packages” being defined as anything that won’t fit in the mailbox or has a tracking number). That’s 18 packages per student annually, from care packages and birthday gifts to ecommerce merchandise and textbooks.

“We also get odd stuff,” says Ed Jawor ’93, Office Services assistant director. “Like a set of four tires and an entire bed including frame, mattress and headboard.”

With 850 student mailboxes in Chase Hall for 1,750 students, Bates has a long tradition of shared mailboxes. That also used to be part of the mailbox charm.

When Henderson arrived in the 1990s, focus groups told her that students liked sharing a mailbox because they liked meeting their box-mates. There was socializing and camaraderie.

That good vibe is now gone since the mailboxes are mostly just a stopping-off point. The real fun and excitement — picking up packages, opening them, being surprised — all happens at the Package Center.

Jawor recalls the scene in the Package Center the week before President Obama’s first inaugural.

“I was surprised at how many students were getting overnight packages with tickets to inaugural balls and other events,” he says. “One student cried when she picked up her package. It spoke to their passion and involvement in that election, and the role played by e-commerce and online communications.”

Even though the Package Center lines get long sometimes, “you’re super-excited to get a package, so it’s worth waiting,” says Keith.

Coffee cake in hand, Noah Morasch decided to share it with his First-Year Seminar class, “Choices and Constraints.” The cake’s rapid cross-country journey ended there.

“It was eaten quickly.”