Behold the power of furniture.

The college’s residence hall at 280 College Avenue, opened in 2007, includes study rooms designed for small groups. Each room has a table for six, but occupancy rarely tops one or two students.

That’s a prevailing American social response to tables: One person seems to own the whole thing. So a single student in that Bates study room can effectively, if not intentionally, take over the whole space — other students don’t want to intrude.

Furniture, in short, shapes psychological space. It’s a lesson taken to heart by the Bates people who influenced the design of the college’s new residences, Kalperis and Chu halls, at 65 and 55 Campus Ave. respectively.

By diversifying furnishings in the common spaces, “we were trying to mix together single users, smaller groups, and larger groups,” says Pam Wichroski, the college’s director of capital planning and construction. 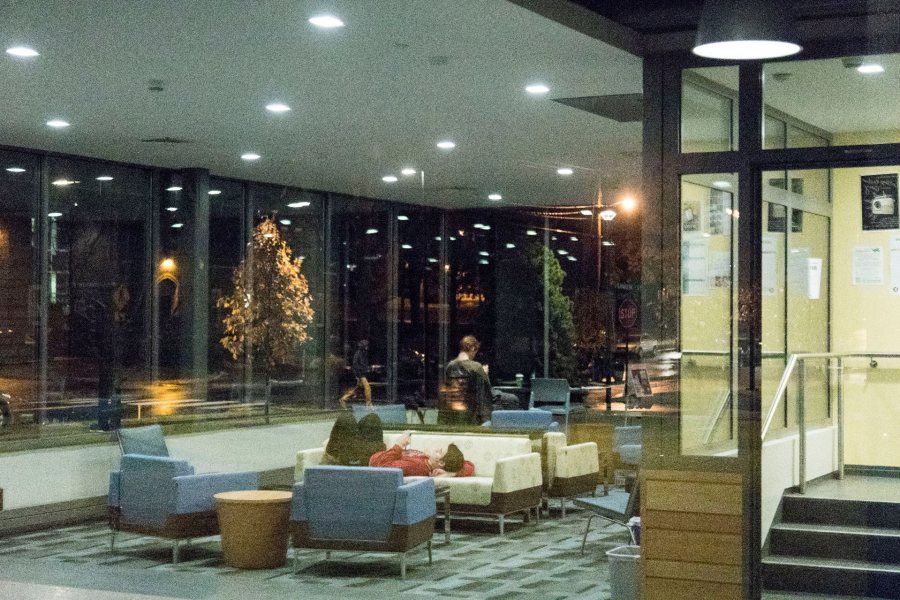 A mix of furniture, an inventive floor plan, and an cozy fireplace (out of sight around a corner) combine to make the Chu Hall lobby an attractive gathering spot. (Josh Kuckens/Bates College)

That’s an example of interior design as a means of shaping interactions — a kind of social engineering long understood at Bates, where residential life is integral to the educational mission.

Providing common spaces, and furniture, that suit different kinds of people is a way to get those people talking to and learning from each other.

“The principles of inclusivity, diversity, and community were embedded into the design and the planning process” for the new dorms, says Philip Chen, principal architect on the project for Ann Beha Architects.

Beha surveyed students about their housing experiences and preferences at the beginning of planning, Chen says. Eighty-four percent of respondents ranked “living with friends” as the first or second consideration in making their housing choices. “So we knew that building community was a key goal for this project.”

Diverse furniture is one approach to healthy res life, but it’s not the only one. Here’s a closer look at interior design concepts that Bates and project designer Ann Beha Architects emphasized at Kalperis and Chu. 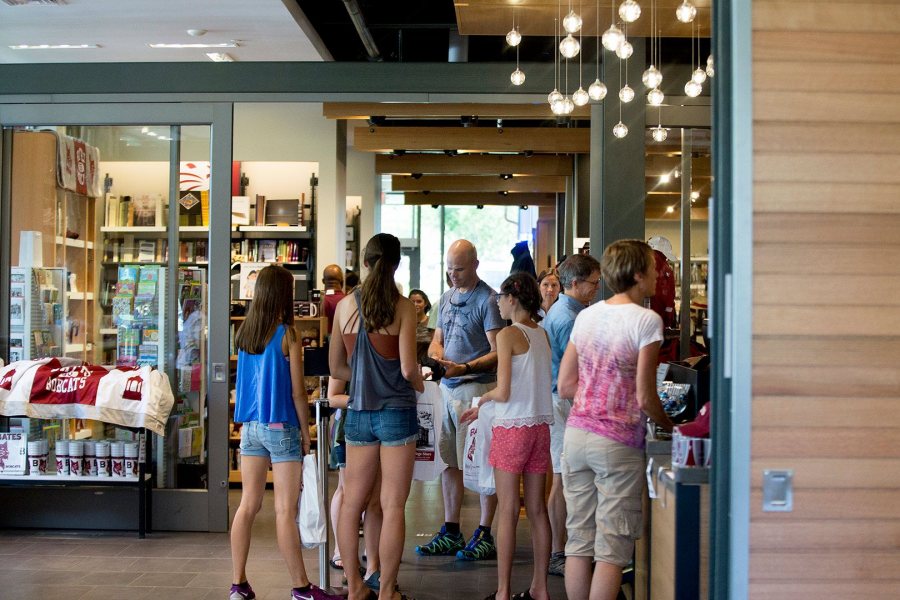 The presence of the College Store and Post & Print in Kalperis Hall brings a new density of Bates people to the south edge of campus. Here, arriving members and families of the Class of 2020 stock up at the store in late August 2016. (Phyllis Graber Jensen/Bates College)

The boldest stroke of social engineering in the new dorms was the relocation of the College Store and Post & Print (the former Office Services) to the first floor of Kalperis Hall, adjacent to a welcoming lobby with mixed seating and a fireplace.

This arrangement echoes a national trend on residential campuses, says architect Chen: “vertical housing” that integrates ground-floor retail space with housing above. In Bates’ case, he notes, “the rise of online shopping has made packaging and postal services a primary campus function.”

Now a state-of-the-art handling center for the avalanche of packages that arrives daily for students, “Post & Print along with the Campus Store will create a daily hub of activity and student traffic.”

And not just students. The store and P&P are broadly useful businesses that, sooner or later, will draw in virtually everyone on campus — and they’re open to the general public, too.

“That whole area is becoming a bit more of a center for campus, or least is more heavily traveled than it has been in the past,” says Matt Phillips ’17 of Acton, Mass., residence coordinator for Chu Hall. “So it’s really nice to have lots of different spaces where people can hang out, even if you don’t live in the dorms.”

How suite they aren’t: Singles and doubles

In planning the new dorms, “we spent quite a bit of time looking at the mix of student rooms on campus,” says Pam Wichroski, Bates’ director of capital planning and construction.

The result is an echo, if not a replica, of a concept employed at 280 College Street. In that residence, and now Kalperis and Chu, the once-trendy notion of suites gave way to a more outward-facing model: “We ended up mixing singles and doubles, grouped in clusters that are broken up with common areas,” Wichroski says. 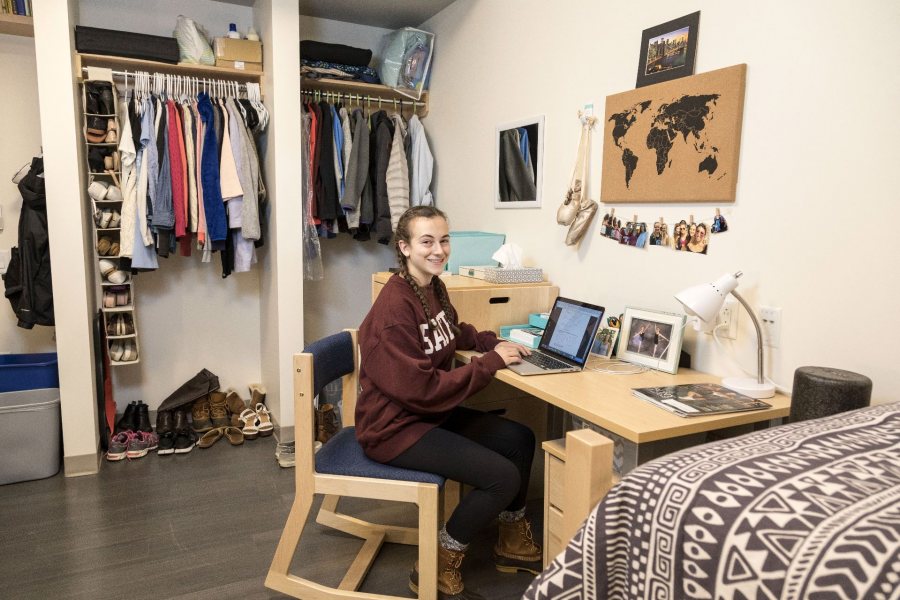 Isabella Del Priore ’19 of Cos Cob, Conn., poses for a portrait in her fourth-floor room in Kalperis Hall. “It really feels like a community. Having the kitchen close by is nice, and all my friends come up here to hang out.” (Josh Kuckens/Bates College)

That allows friends to lodge near each other while encouraging them to socialize in common areas, instead of holing up behind closed doors. The clusters at Chu and Kalperis include first-year centers on the second floor of each dorm.

The residence at 280 College laid important groundwork for Kalperis and Chu halls in other ways. Taking the older residence as a baseline, student input on the new dorms suggested allocating less space for student bedrooms and applying the savings to common areas.

They also made clear that what they want in their living space is flexibility — a diversity of environments to meet a diversity of learning and socializing styles.

For instance, “students want to study in groups, and they want to study by themselves,” says Erin Foster Zsiga, head of residential life. “They need complete quiet so they’re not distracted, and they need to be around people.”

In short, they wanted variety and they got it. “One of the things that’s really interesting is the fact that there are so many different common areas,” says Matt Phillips. 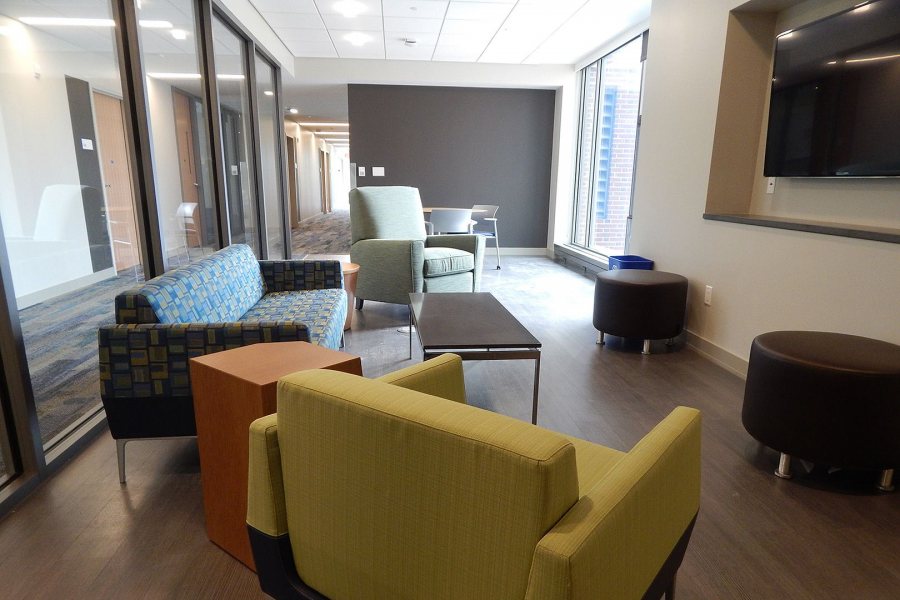 Taken in August shortly before students moved into Kalperis Hall, this lounge serves a cluster of student rooms. Note the mixed furniture — a table and chairs at rear, and soft furniture for TV viewing — and the glass walls, which afford what’s called “flow-by quality.” (Doug Hubley/Bates College)

There’s a common space for every personality and purpose. Spaces range in size from intimate nooks, like diner booths, to the Treehouse, the sprawling fourth-floor lounge in Kalperis Hall that’s like a family rec room writ large.

Sofas and banquettes and chairs, oh my 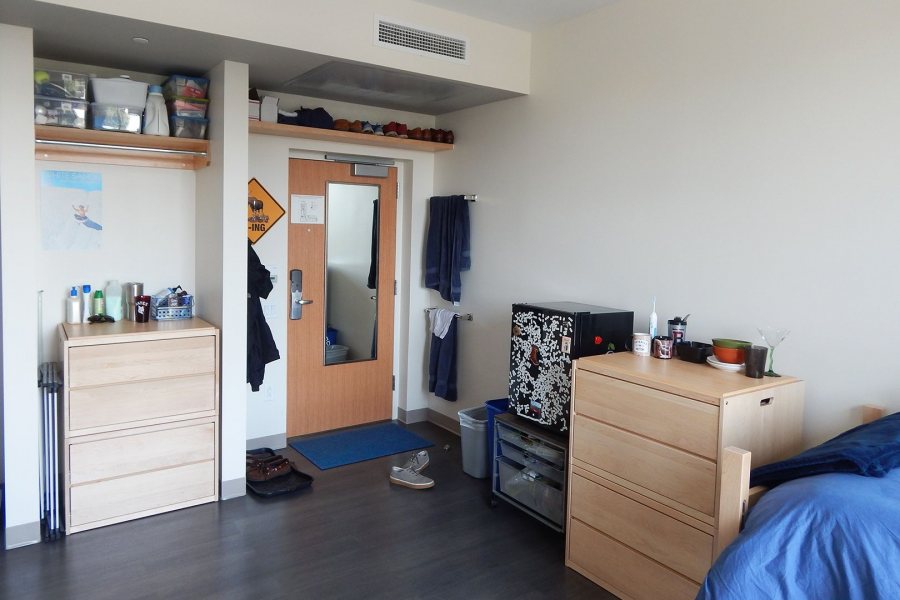 The wooden storage units in this Chu Hall student room can take two forms: stacked to function as bureaus, as shown, and separated into two-drawer units that slide under the beds. (Doug Hubley/Bates College)

Flexibility was the watchword for furniture, too — as applied both to the mix of items within rooms, and to specific models like the bedroom storage bins that can live either under the bed or stacked up, like a little bureau.

The result is mind-boggling furniture diversity. (If only the tribes of humanity could co-exist so peacefully and productively.) In study areas, for instance, large rectangular tables accommodate large groups and small round ones are ready for more intimate gatherings. “The furniture sends a signal that this is a study space for multiple people,” says Foster Zsiga, alluding to those six-seat tables for one in the 280 College study rooms.

Large lounges bring furniture diversity to its ultimate. In the Treehouse, easy chairs and a sofa offer an invitation to bliss out while gazing into the gas fireplace. Away from the fireplace, there are smaller groupings of soft furniture for tête-à-têtes.

Near the kitchen, there’s a farmhouse table with benches for studying or snacking. In the kitchen itself, a long counter with stools affords a great view toward Chu Hall.

And the kitchen at Chu, like the one in Smith Hall’s newly renovated basement, boasts what appears to be a new Bates trend in public furniture: long banquettes with little tables that, restaurant-like, can be used by solo diners or pushed together for groups. Flexibility!

Associate Dean of Students James Reese named another formative concept built into 280 College. “Flow-by quality” refers to a kind of visual access to a room that allows students to reconnoiter before committing themselves to entering. 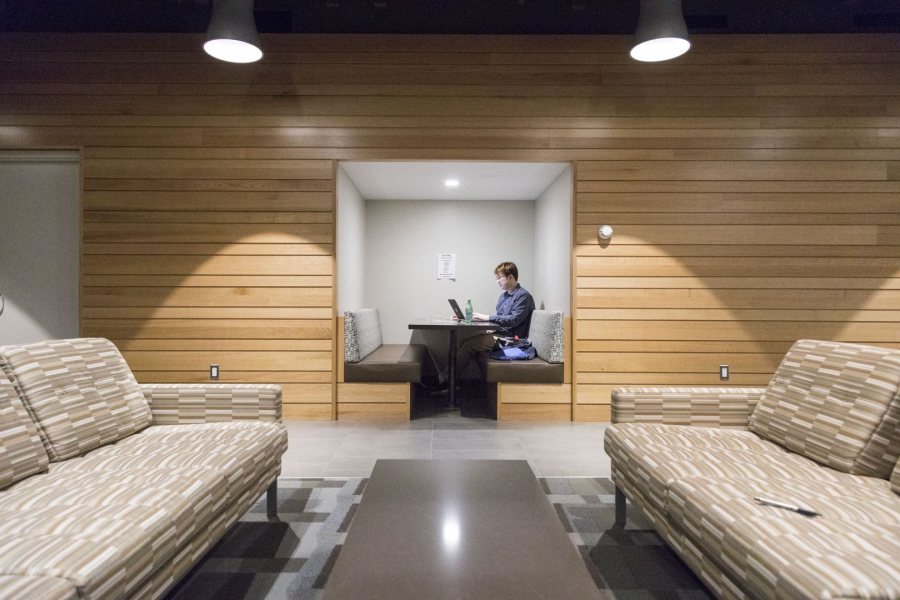 Wenkai Han ’17 of Beijing, China, works on his resume in a “niche” in Chu Hall. Spaces like this have “flow-by ” quality: A student can watch any social action nearby with an easy choice of joining or not. (Josh Kuckens/Bates College)

Common spaces that succeed socially, Reese explains, are “positioned such that a person can walk by and easily view in to see who is there, while also being able to walk away naturally.” New arrivals are spared the awkwardness of entering a space only to leave because they don’t know anyone.

Flow-by abounds in Kalperis and Chu. Lounges are situated near heavily trafficked areas like stairwells and corridor junctions. Study areas have doors and even walls with a lot of glass. A few brilliantly achieve flow-by via graphics, adapted from decades-old Bates Manufacturing Co. textile designs, applied to the glass walls that make it easier to see in than out.

Again, the Treehouse may be the crowning example of flow-by. It’s a destination that’s also a thoroughfare, with an adjoining TV room and elevator at one end, a kitchen and access to sleeping quarters at the other, and the dorm’s laundry room midway along. The Treehouse is the place to be — but when it’s not, there are always other places to go.

And a twist on the concept is a booth-like niche in the Chu lobby (with a counterpart in the Smith Hall basement) that works like flow-by in reverse: The booth allows occupants to watch the social action flow by without committing to either joining or abstaining. 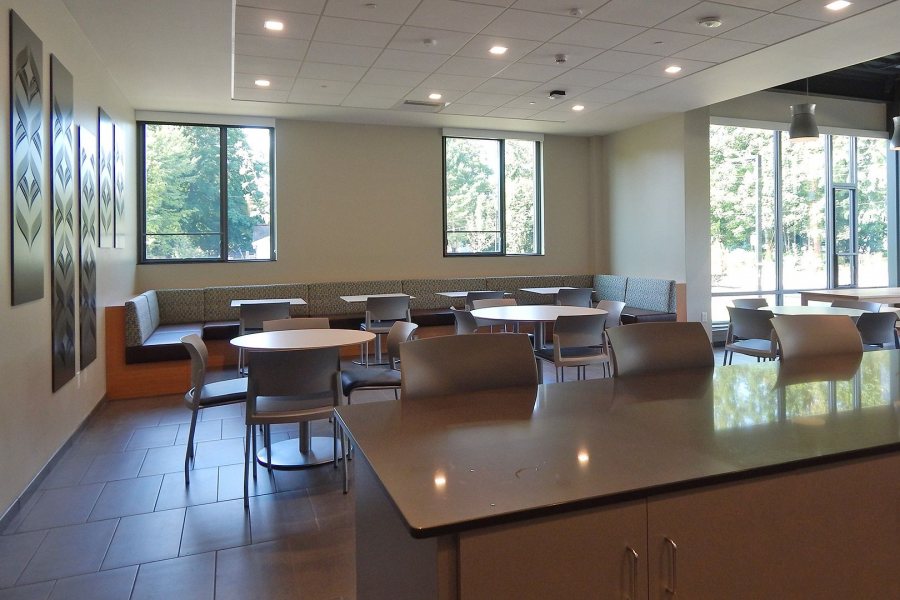 A variety of seating arrangements, including a long banquette at rear and stools at the counter, accommodate a variety of personalities and activities in the Chu Hall kitchen. This image was taken just days after the first students moved into Chu, in late August 2016. (Doug Hubley/Bates College)

The kitchen at 280 College has proven to be a little small, Wichroski says, because students tend to stay there to eat. “The dining area is remote from it, and students almost never take their food from the kitchen into the larger living area.”

In contrast, the Kalperis and Chu kitchens are spacious and amply equipped with seating. And, of course, it’s mixed seating: farmhouse tables, banquettes, counters with stools, high-tops.

Kitchen placement, of course, was intentional: The kitchens are adjacent to large lounges in each dorm, but distinct from them. “There’s a nice flow between the two spaces,” says Molly Newton ’11, associate director of residence life.

The kitchens in Kalperis and especially Chu, the larger of the two, are meant to be used by the whole student body. “We really want students to be able to say, ‘These are great vibrant spaces and I want to be part of that,'” says Foster Zsiga.

“Our students want to sit and talk over food, and they want to learn about other cultures over food.” 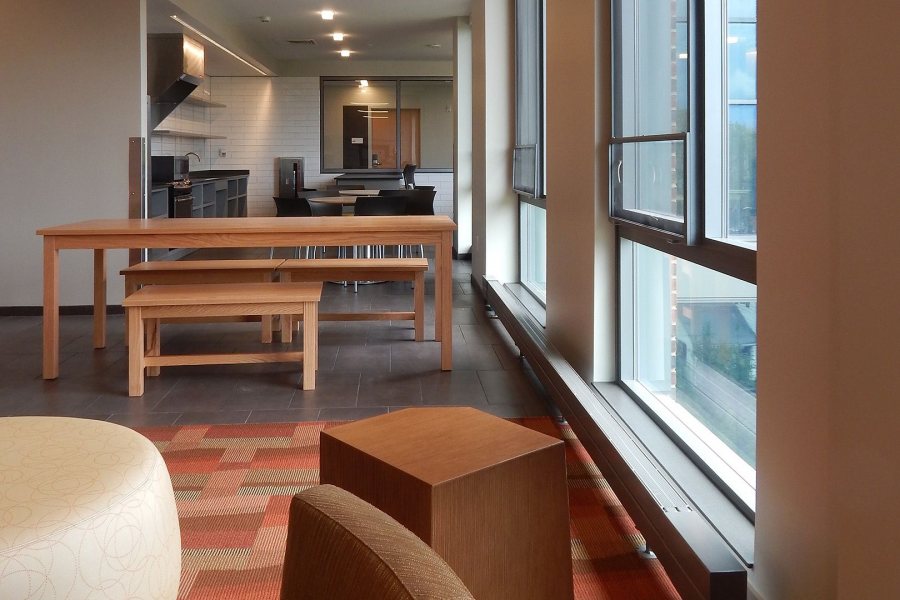 Seen a couple of weeks before students moved into Kalperis Hall, a fourth-floor eat-in kitchen adjoins, but is distinct from, the Treehouse lounge. (Doug Hubley/Bates College)