After 20 years of service to Bates College, Vice President for Information and Library Services Eugene Wiemers will retire on June 30, 2015. 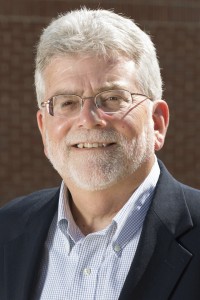 Vice President for Information and Library Services Eugene Wiemers will retire from the college on June 30, 2015. (Mike Bradley/Bates College)

In sharing the news with the college community, President Clayton Spencer said that “it is difficult to imagine running the college without Gene Wiemers. He is the consummate institutional leader — he sets clear goals and objectives and works collaboratively across the college to achieve them. The results speak for themselves. Our integrated library and information services organization is regarded as a national model among liberal arts colleges.

“I am enormously grateful for Gene’s long and distinguished service to Bates and for his wise counsel in my first years on campus.”

Reflecting on his two decades of service to Bates, Wiemers said, “It is a cliché to say that our greatest asset is our staff, but it is true. My finest accomplishment has been to surround myself with people in libraries, archives and IT who are younger, smarter and faster than I am, and to learn from them every day.

“It has been a honor to work with them as we set very ambitious goals for Bates and work toward continuously doing better.”

An emphasis on aligning IT and library operations to meet the goals of the college.

Wiemers came to Bates in 1994 as librarian of the college, serving as a member of the college’s information services management team. He assumed leadership of all information and technology operations in 2000, bringing into a single organization the operations of the George and Helen Ladd Library, information technology, archives, media and telecommunications services. Wiemers became vice president in 2005.

He emphasized aligning IT and library operations to meet the goals of the college with uniformly high expectations of service. He organized the college’s first dedicated academic technology and Web services units, and worked to adapt the structure and function of all ILS operations to continuous changes in technology.

Bates Professor of Sociology Sawyer Sylvester, who has worked closely with Wiemers as a longtime member of the faculty’s Library Committee, believes Bates is fortunate to have had Wiemers as librarian during the library’s most expansive period.

“Part of his genius has been to join the traditional library with computing and improve each by that marriage,” Sylvester said. “Withal, his skill as an administrator is unparalleled, hiring a superb staff of librarians and giving them his full support.”

As information technology has changed the concept of libraries and the types of resources they should provide, Wiemers has been instrumental in keeping the college’s library and technology services current and relevant.

Recognizing that students were coming to Bates with increasing expectations from academic and communications technology, he has welcomed their input, even as staff and faculty members worked to hone students’ skills. He has worked to infuse and upgrade technology in all the teaching, learning and office spaces on campus, providing uniformly high quality technology in all classrooms and meeting rooms, and has championed the automation of business processes throughout the college.

Wiemers oversaw the merger of the Edmund S. Muskie Archives and the library’s Special Collections department in 2000, in the process creating the first Bates College Archives. With colleagues at Colby and Bowdoin, Wiemers and his Bates team helped to build the CBB Library consortium into one of the nation’s most successful collaborations of small college libraries.

From 2002 to 2004, he led the team that comprehensively reviewed Bates operations, practices and systems in the Department of Security and Campus Safety and led the effort to support their work with new technologies. He has served on a dozen external review or New England Association of Schools and Colleges accreditation teams for liberal arts colleges in the Northeast.

“The dean of those of us who manage merged organizations.”

Wiemers has been an active member of his professional community nationally as a presenter at conferences and member of committees and review boards.

”He is the dean of those of us who manage merged organizations, the person we have turned to for advice and guidance,” said Elliott Shore, executive director of the Association of Research Libraries and former head of libraries and IT at Bryn Mawr College.

Wiemers plans to continue enjoying life in the beautiful state of Maine, to travel with his wife, Nancy Jennings, and to “keep up with our two daughters and their families and careers.”

Video: Lee Abrahamsen is at the heart of Bates’ medical studies program