Marcus Bruce ’77 marked his appointment as the first Benjamin E. Mays Distinguished Professor of Religious Studies at Bates with a lecture on Nov. 5 that probed the impact the Paris Exposition of 1900 had on the thinking and work of W.E.B. Du Bois, the historian, author and civil rights leader. 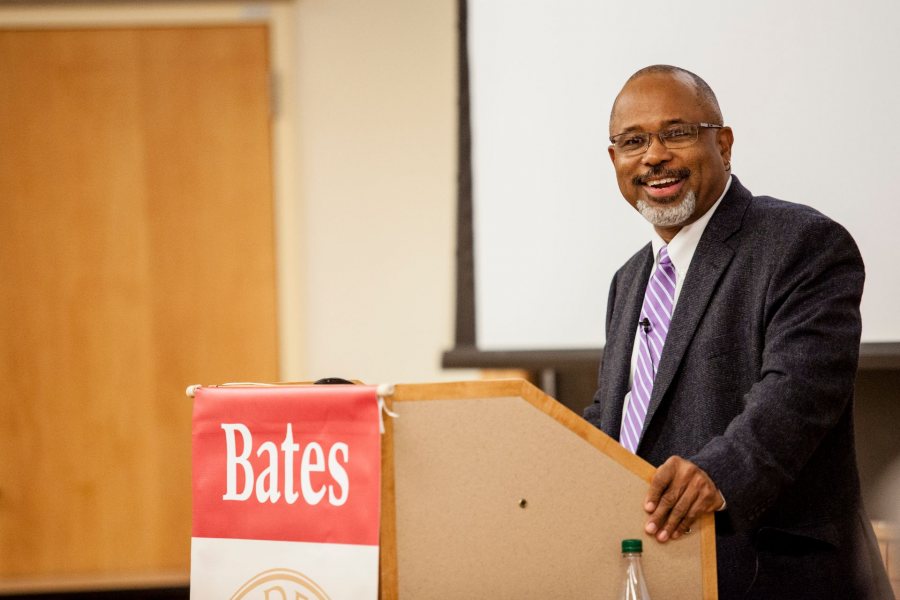 Joined by family, friends, faculty, staff and students, Bruce drew on his years of study into the American Negro Exhibit at the Paris Exposition of 1900 to reveal how Du Bois and his contemporaries wrestled with what it meant to be both American and African American in the early 20th century.

This exhibit  — a government-sponsored display of books, photographs, charts and artwork  — was meant to illustrate the progress of African Americans since the Emancipation Proclamation. It was for the Paris exhibit that Du Bois wrote what is considered to be his most famous declaration: “The problem of the 20th century is the problem of the color-line.”

In describing Du Bois’ relationship with the exhibit, Bruce noted that “he knew the significance of the moment from a historical perspective. It was his defining moment, and the occasion of his self-fashioning. Whenever Du Bois would discuss the event in the future, he would describe it as his achievement alone, but the exhibit was not his sole creation.”

“[Du Bois] knew the significance of the moment from a historical perspective. It was his defining moment, and the occasion of his self-fashioning.”

The Mays Professorship was established with a $1 million gift from former Bates trustee James F. Orr III and his wife, Ann L. Orr, parents of Brooke Orr ’94. Mays, a 1920 Bates graduate, was a civil rights leader, mentor of the Rev. Martin Luther King Jr., and former president of Morehouse College.

Bruce was officially appointed to the chair in 2012, along with five colleagues also receiving endowed professorships.

He appears as a source in the new documentary Through a Lens Darkly: Black Photographers and the Emergence of a People, in which filmmaker Thomas Allen Harris examines how photography has affected the lives of black Americans.

“Every once in a while I stumble upon a great collection of material that can then make the picture fuller,” Bruce said.