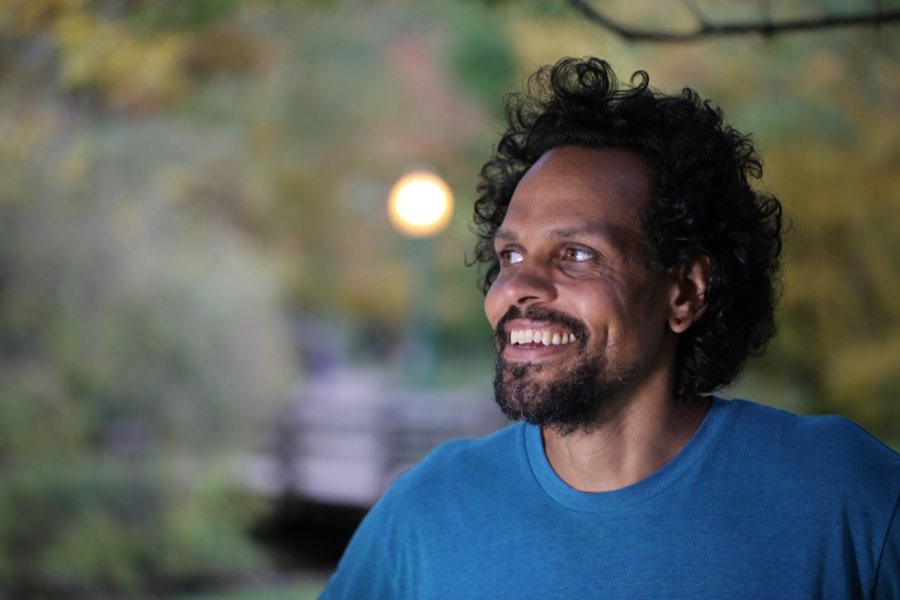 Gay, an assistant professor of English at Indiana University, is known for the dynamic style and vibrant imagery of his poetry, whether he is writing about the basketball court or his relationship with his father.

Poet Jean Valentine writes that Gay’s poems “speak out of . . . an individual wisdom that is bright with pity, terror and rage, and which asks the reader to realize that she is not alone — that the grief he carries is not just his own.”

Catalog of Unabashed Gratitude (University of Pittsburgh Press) is a sustained meditation on things that go away — loved ones, the seasons, the earth as we know it — that tries to find solace in the processes of the garden and the orchard. It’s a book that studies the wisdom of the garden and orchard, places where everything is converted into what might, with patience, nourish us.

Gay’s second collection, Bringing the Shovel Down (University of Pittsburgh Press, 2011), is a re-imagination of the violent mythologies of state and power. His poems, which one reviewer described as “artfully honest,” contemplate violence, compassion and ethics.

Gay’s first book, Against Which (CavanKerry Press, 2006), which was described by poet Thomas Lux as “poems that both ‘terrify and comfort,'” received the ForeWord Book of the Year Honorable Mention in 2006.

Gay’s poems have been published in journals and magazines including American Poetry Review, Harvard Review, Atlanta Review, Margie: The American Journal of Poetry and Ploughshares. In addition to his position at Indiana, he teaches in Drew University’s low-residency master’s of fine arts program.

Besides being a poet and teacher, Gay is an active gardener. He founded and leads the Bloomington Community Orchard, a publicly owned and operated organic apple orchard, and is working with Aimee Nuzhukumatathil on a collection of garden poems.

Picture story: Student art majors who ‘vibe off each other’