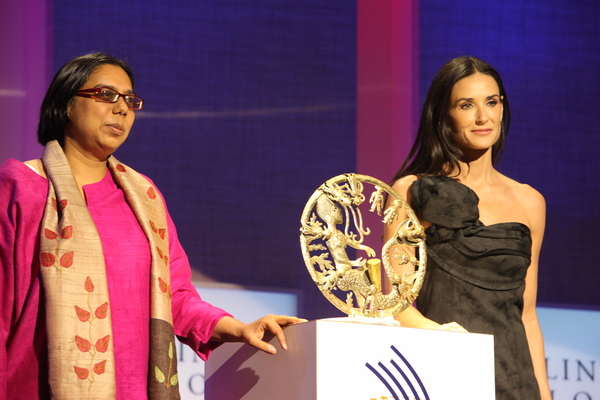 Ruchira Gupta, founder and president of an organization fighting sex trafficking in India, discusses the abolition of the sex trade in a Bates College event at 4:30 p.m. Tuesday, March 17, at the Benjamin Mays Center, 95 Russell St.

The event is open to the public at no cost. Co-sponsors of this Harward Center Civic Forum include the departments of anthropology, economics, education, psychology and sociology; the programs in women and gender studies and in Asian studies; the Office of Equity and Diversity; and the interdisciplinary studies division. Also co-sponsoring is the University of Maine School of Law.

Gupta has dedicated her life to abolishing Indian sex trafficking. As a journalist and an activist, she has received recognition and honors all over the globe. One of her major accomplishments is the founding in 2002 of Apne Aap Women Worldwide, a nongovernmental organization that tackles issues of sex trafficking and promotes women’s rights. She is the organization’s president.

Gupta’s career began in journalism in India, and her work on the documentary “The Selling of Innocents,” which examines trafficking between Nepal and India, won her the 1996 Emmy for Outstanding Investigative Journalism.

In conjunction with the United Nations, Gupta has been the driving force behind the development of national action plans for the prevention of sex trade exploitation. A prolific writer, she has also written several books and manuals for combating sex trafficking around the world.

She continues to reveal links between trafficking and prostitution and to push for social change based on the fact that male demand continues to fuel the sex trade. This approach emphasizes the importance of shifting culpability onto perpetrators rather than onto victims.

Among numerous distinctions, Gupta received the 2007 Abolitionist Award of the House of Lords (UK) and the 2009 Clinton Global Citizen Award for Commitment to Leadership in Civil Society.

On its website, Apne Aap Women Worldwide states that “prostitution is not a choice but an absence of choice based on gender, class, caste, ethnic and race inequalities that the sex industry exploits.” The organization’s objective is to reach out to young girls who live in economic or social situations at risk for exploitation.

To date, Apne Aap has assisted 20,000 low-caste girls and women, and protected their families from the snares of sex trafficking.