“What gets you geeky?”

In other words, Larry Handerhan ’05 asked a group of Bates students on May 16, what interests or ideas make you excited about what you do? 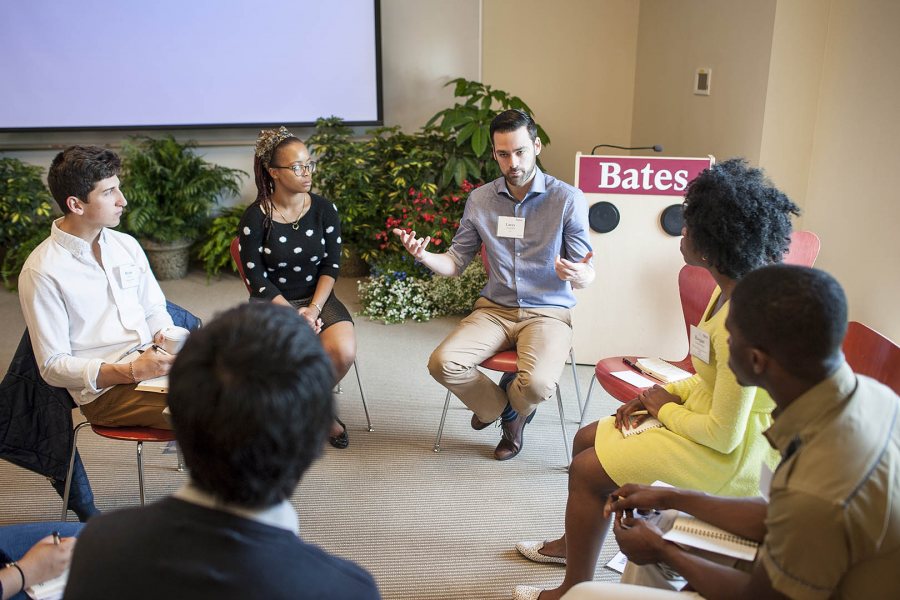 Larry Handerhan ’05 discusses his career path with students during the May 2015 “Working Weekend” program, co-sponsored by the Purposeful Work initiative and the Office of Equity and Diversity. (Josh Kuckens/Bates College)

Handerhan was one of the alumni speakers welcomed back to Bates by “Working Weekend,” a daylong event designed to help students explore how to create meaning in one’s working life.

Co-produced by the college’s Office of Equity and Diversity and the Purposeful Work initiative, Working Weekend neatly braided together two driving interests of the college: preparing students for lives of meaningful work and giving them opportunities to engage with alumni representing diversity in breadth and depth.

The watchwords of the session were “interests” and “strengths.” In combination, these two things — what you love to do and what you do well — give you the power to create a successful and fulfilling professional life. And what gets Handerhan geeky, as he explained to his student listeners, is bringing excellence to public service.

For Handerhan, alignment between self and work began at Bates, where he explored social justice issues inside and outside the classroom. As a senior, he completed an honors history thesis on how the civil rights movement contributed to the gay rights movement.

After Bates, he signed on with AmeriCorps, where he helped with disaster recovery after Hurricane Katrina. That experience inspired him to help make government more efficient. Handerhan is now a program manager within the U.S. Department of Housing and Urban Development. 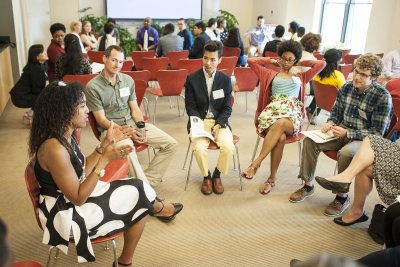 Khairah Klein ’91 (at left), a teacher in New York City, was one of four Bates alumni to share lessons from their careers during the 2015 Working Weekend panel called “Aligning Yourself and Your Work.” (Josh Kuckens/Bates College)

“I immediately felt a connection to the idea that government should help, and I want to be a part of that,” he told the Bates group. “So that’s where that interest in helping really turned into a professional value.”

By taking his interests to Washington, Handerhan was able to hone his strengths in consulting and administration.

He offered his listeners two takeaways. First, doing what you love and doing well financially are not mutually exclusive: You can have both.

Second, you can’t plan everything. Many times, career trajectories are nonlinear, and you should keep your options open.

In fact, a recurrent theme for the “Aligning Yourself” alumni was how one opportunity leads to another. When you put yourself out there by networking and staying active, career options open up in unexpected ways.

Robarts was a good example of how aligning interests and capabilities can lead to a meaningful working life. Robarts, who has worked for the USDA on plant genetics and is now at the Coastal Maine Botanical Garden, began in religion and music at Bates, but soon dived into biology and neuroscience. A passion for plants brought him to Ohio State University, where he wrote his dissertation on the evolutionary development of pansies.

“Over time, it’s been a fantastic fit for me using all the skills that I’ve developed following my passion,” Robarts explained.

Klein shared her experiences as a schoolteacher at New York City’s Spence School. A political science major at Bates, Klein said that politics helps with understanding and respecting differences in the classroom. Even though she felt she hadn’t graduated from Bates with a concrete career plan, she did feel motivated by an enthusiasm for family and nurturing young children — which ultimately led her into teaching.

But not before she spent some time in retailing. Klein emphasized that although you may not know what exactly you want to do at first, you should jump in anyway and see where the next opportunity will lead you. 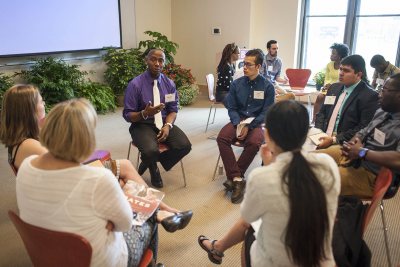 Stephen Gresham ’03 (speaking) was one of seven alumni to return to Bates to help present the May 16, 2015, Working Weekend program. (Josh Kuckens/Bates College)

“It is important to do something that you love,” Klein said. Loving what you do is essential to overcoming a fear of failure.

Gresham, a double major in psychology and Spanish, now works for the Veterans Administration in Bedford, Mass. His Working Weekend story focused on finding places that welcome your identity.

Initially, Gresham didn’t feel compelled to work at the VA. What he discovered, however, was that if you venture outside your comfort zone, you encounter new dialogues in the workplace.

A successful career can depend largely on understanding that your voice is necessary to these conversations, even if your interests and strengths don’t align with the context at first.

“What I wanted to do was not only create spaces that were affirming and nurturing of myself, but serving a similar function for other people,” explains Gresham. “So that is exactly why I went to the VA — because it seemed unfamiliar. It seemed as though it was a conversation that was rumbling.”

Gresham’s concept of bringing new voices to the conversation reflected an objective that Associate Vice President Crystal Williams, Bates’ chief diversity officer and director of the OED, had for Working Weekend. Certainly, one criterion for inviting alumni was that they be “particularly thoughtful about meaningfulness in their working lives,” explained Williams, who proposed the program to Bates after witnessing a similar event in her previous position at Reed College.

But the project team was also intentional about alumni diversity. “We looked for age diversity, gender diversity, racial and ethnic diversity, first-generation-to-college status, geographic diversity, among other aspects,” she said.

And in the end, “we wove a nuanced tapestry of alumni together to create a program that was rich and sparked personal connections based on many things.” 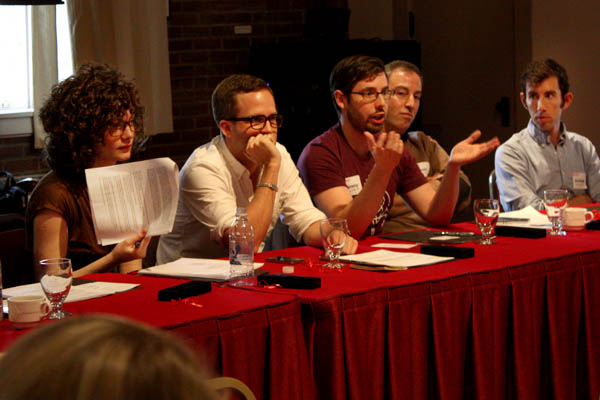