Commencement: Bates Class of 2015 shares a ‘love that can change the world’

“If there is nothing else that I have learned from this campus,” Bates senior Alex Bolden told a gymnasium full of people gathered to see him and his classmates graduate, “it is that there are no bounds to the change a community can effect when it is grounded in love.” 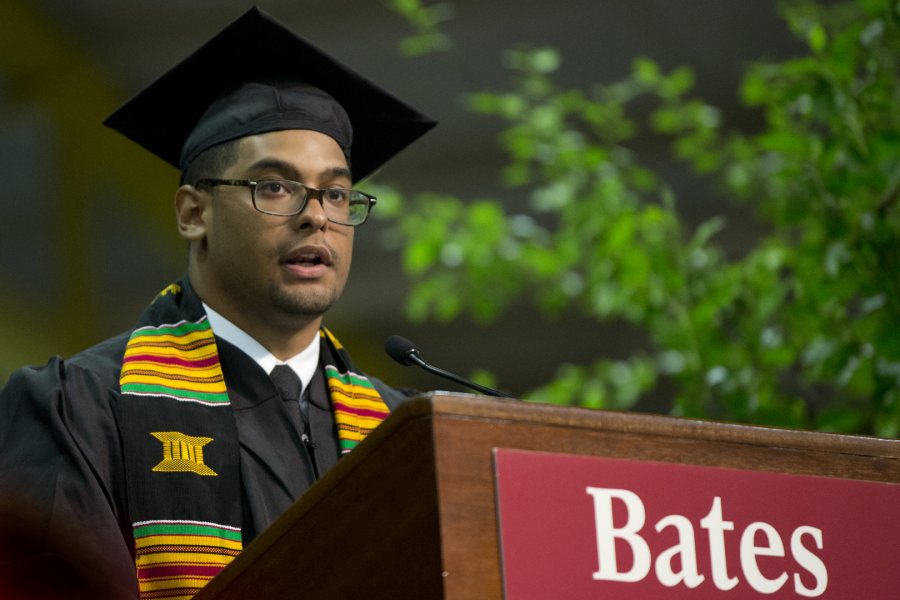 Alex Bolden ’15 of Cleveland offered the Senior Address at Commencement 2015 — and had good news to share about a proposal. (Phyllis Graber Jensen/Bates College)

In the Senior Address that Bolden, a double major in philosophy and rhetoric from Cleveland, offered at Bates’ 149th Commencement, he explored the kind of love that bonds a class with a college and the classmates with each other, and how that love should now be directed outwardly.

Enjoy all the Bates multimedia coverage of Commencement Weekend, including speeches, video and text stories, Commencement livestream clips, and photographs. 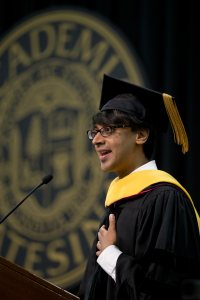 But Bolden’s speech was charged with love of a more immediate kind, too. He said, “I want to give special recognition to my fiancée,” classmate Jamilia Davis of Oak Park, Ill. “Thanks for saying ‘yes’ last night.”

That was one of several peak moments in a May 31 ceremony also highlighted by a Commencement address by honorary degree recipient and award-winning mathematician Manjul Bhargava.

In his talk, Princeton professor and Fields Medal recipient Bhargava celebrated the liberal arts education through an exploration of his own fascination with the unities among music, poetry, and math.

The college conferred bachelor’s of arts and of science degrees on 484 Bates graduates.

Held in Merrill Gymnasium because of rain, the ceremony began with a welcome from President Clayton Spencer. Perhaps inspired by Bhargava, a specialist in the properties of whole numbers, Spencer quantified some of the accomplishments of the graduating class — which contains, for example, 14 Fulbright Fellows, 93 double majors and one triple major, 37 honors thesis students, and 69 NESCAC All-Academic athletes.

That last figure, by the way, gave the president a chance for a shout-out to the women’s rowing team, whose win in the NCAA Division III championship yesterday in Gold River, Calif., gave Bates its first-ever NCAA team championship.

In another memorable development, Professor of Sociology Sawyer Sylvester, appointed to the faculty in 1969, carried the college mace for the last time.

As senior member of the faculty, Sylvester had the honor of bearing the mace at the head of the academic procession. But he is retiring this year, so while he carried the ceremonial mace into Commencement, he didn’t leave with it. 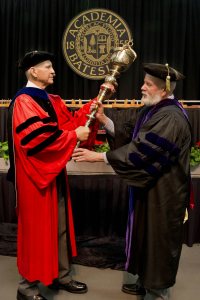 Professor of Sociology Sawyer Sylvester, who as senior member of the faculty was the longtime bearer of the college mace at ceremonial events, hands the mace over to his successor, Charles Franklin Phillips Professor of Economics Michael Murray at Commencement 2015. (Phyllis Graber Jensen/Bates College)

As he led the academic procession from the stage during the recessional, Sylvester handed over the mace to his successor, Charles Franklin Phillips Professor of Economics Michael Murray.

“The surprising unity of all fields of human endeavor.”

Bhargava began his address in a light vein. “When you all exited your last class here at Bates and were getting ready for graduation, you probably weren’t thinking, ‘I wish I could have had one more math class!’ ” he said. “In case you were thinking this, your dream has just come true.”

But not really. Bhargava devoted most of his time at the podium to an examination of, in his words, “the relationships that exist between mathematics and art, between sciences and the humanities — and more generally the surprising unity of all fields of human endeavor — and what this all means in terms of the value of a liberal arts education.”

Bhargava is known as a theorist who perceives math’s complexities in the context of a greater whole in which, for him, music and ancient Sanskrit poetry also figure prominently.

He told the Bates audience a bit about the numerical relationships that determine which frequencies of sound are pleasing to the ear, and therefore musical.

He pointed out that several central concepts in mathematics, such as Fibonacci numbers, “were first discovered . . . in the context of poetry.” In fact, the structure of the Sanskrit poetry that Bhargava studied with his grandfather “naturally led early poets and linguists to consider various mathematical and scientific questions that one might not immediately expect from a poet.”

In fact, hundreds of years ago math was taught through poetry, Bhargava said, offering an example of a poem from 1150 that uses jasmine, a fragrant lotus blossom and the buzz felt between a male and a female bee to teach square roots and fractions.

In one of several generous references to his fellow honorands, Bhargava cited ophthalmologist Abelson to exemplify how concepts from outside one’s own discipline can catalyze important breakthroughs — disciplines, in Abelson’s case, including pharmacology, pathophysiology, economics, chemistry, and cellular biology. 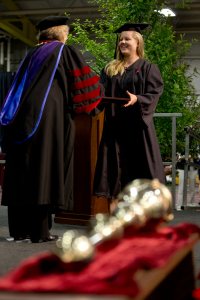 A second example was the mathematician and Nobel Laureate John Nash, subject of the film A Beautiful Mind and creator of so-called Nash equilibrium, a broadly useful theory for analyzing competitive situations. Clearly moved by the recent deaths of Nash, a colleague from Princeton, and his wife in a car crash, Bhargava said that Nash equilibrium was not only a mathematical masterpiece, “but also contained extremely artistic, creative ideas and constructions that were inspired by phenomena in neighboring disciplines.”

Nash’s example “clearly show[s] that creativity and technical know-how are both needed in this world, and are needed together, and creativity or inspiration often comes from the connections, relations, and analogies that one sees with other subjects.”

“Keep learning about other disciplines,” Bhargava told the graduates. “And don’t just appreciate the connections between different realms of human endeavor that you find but actively look for them – because they’re definitely out there.”

Directed and accompanied by music faculty member John Corrie, the Commencement Choir followed Bhargava with a performance of Stephen Schwartz’s song “For Good” from the musical Wicked. It was another way for the Class of of 2015 to offer a more-than-fond farewell: “Because I knew you / I have been changed / For good.”

“What was the moment you fell in love with Bates?”

At the top of the ceremony, Bolden was pointed and eloquent in describing how the love Bates students feel for each other and their school is, or should be, “a love that can change the world.”

“What was the moment you fell in love with Bates?” he asked his classmates. He explained how his own introduction to Bates differed sharply from those of many Bates students. Unmoved by the beautiful campus, respected professors, and so on, Bolden came instead for financial reasons, wishing he could attend a big city university instead.

For him, falling in love with Bates was a gradual accretion of details: things like a party invitation in his second week at Bates and a film course taught by Charles Nero that forever changed how Bolden interprets media.

But it was a love that Bolden awoke to only during study abroad thousands of miles away, studying in New Zealand.

“It was at that point that I realized that Bates was not only the right choice for me, but where I belonged.” 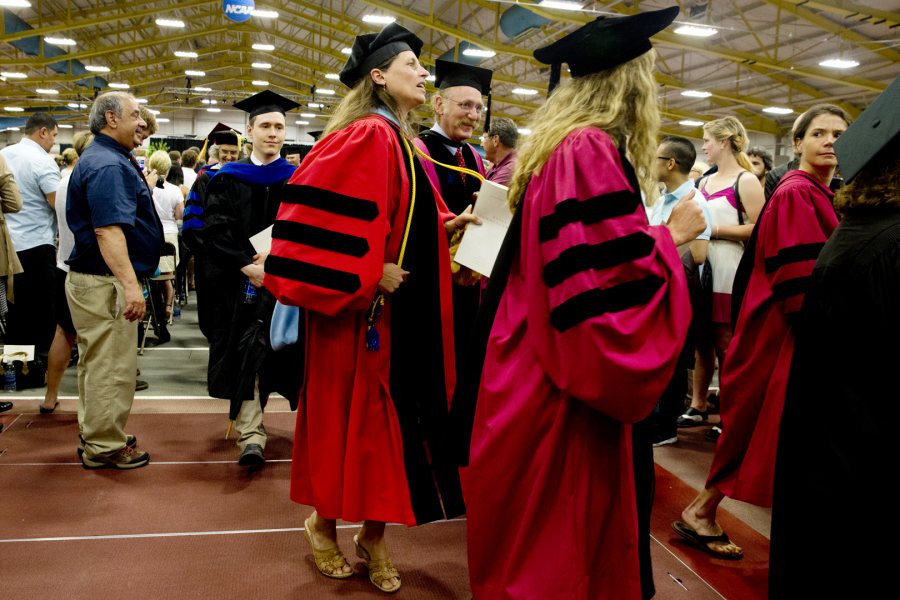 During the Commencement 2015 recessional, faculty members get into the spirit of music from the Atlantic Clarion Steel Band. (Phyllis Graber Jensen/Bates College)

Asking his classmates again when they fell in love with Bates, Bolden said:

“I challenge you to share the love of that moment . . . with those who need it the most, whether that be by writing a scholarly dissertation on women’s rights, reassuring that little boy or girl in your City Year or Teach for America class that ‘it gets better,’ or organizing a rally against fracking — or simply sharing on social media the fact that black lives do and have always mattered.

“Do it all with the same love that made you fall in love with those here next to you today.”

Bates set to honor Class of 2022 at all-together, all-welcome Commencement 2022