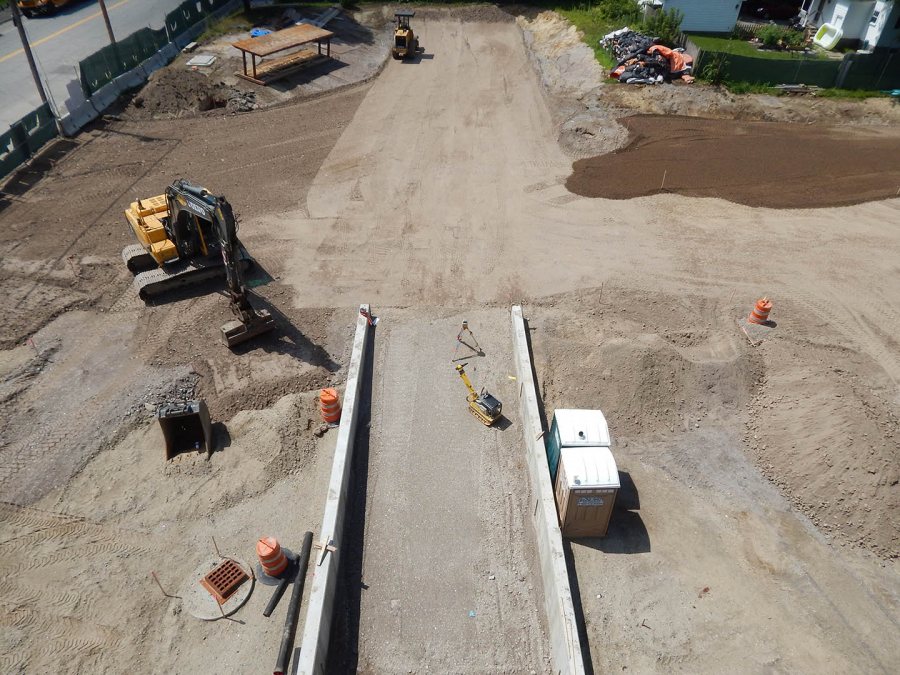 Dock of the loading bay: Taken July 28, 2015, this southward view from the fourth floor of 65 Campus Ave. shows the future loading dock for the College Store and Office Services, and the soon-to-be paved parking lot. (Doug Hubley/Bates College) 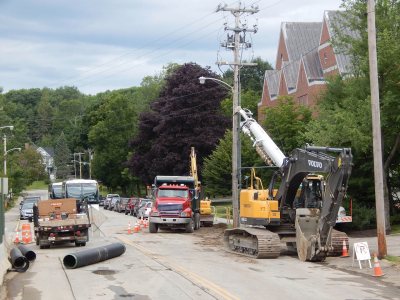 Getting Here From There Dept.: The end is in sight for the current run of utilities-related road closures on Campus Avenue.

Chris Streifel, Bates project manager for the construction project that has necessitated the weeks of open-tar surgery, explains that there’s one more big job that will block traffic on the avenue altogether.

Into the week of Aug. 3, crews will close Campus Avenue at the junction with Central Avenue in order to lay conduits for communication and data cables serving the new student residences of the Campus Life Project.

The conduits, also known as a duct bank, will run from the student residence being built at 65 Campus Ave. north along Central to the Gray Athletic Building, and ultimately to a telecom hub in Commons. 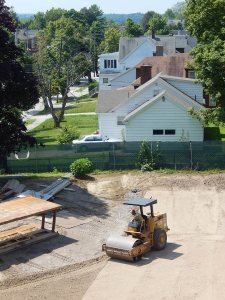 In the meantime, expect partial closures elsewhere on Campus in the coming days as recent surgical sites are repaved and new curbs are installed on the campus side of the street.

No mere boring straight curbs that interest only dogs, these instead will be “bump-outs,” those rounded projections into the roadway that encourage traffic to slow for pedestrians. When the new dorms at 65 and 55 Campus Ave. open, in about 13 months, foot traffic across Campus will increase significantly.

For instance, in the Bates Communications Office, we have recently recognized the resumption after many months of a rumble perceptible all the way up here in the Campus Construction Update penthouse.

The cause is a so-called vibratory roller. Actually, that’s a category of machines that range from lawn mower-sized on up, and what’s being used at Bates is an articulated rig that resembles what we used to call, back in the day, a steam roller. It’s helping to prepare the site
for a parking lot soon to be paved behind the 65 Campus Ave. residence. 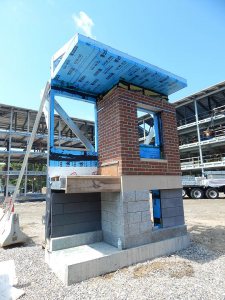 There’s a roller at the front of the machine, and inside that roller is a motor-driven off-center contraption that makes the roller vibrate. The vibration, in conjunction with the sheer weight of the machine, compacts loose soil to form a solid substrate. The next step is to lay one coat of asphalt, called the binder course, atop the compacted soil. The finish coat of asphalt comes later.

If it seems counterintuitive to pave so early, instead of waiting until all the other cosmetic stuff is done in summer 2016, it actually makes sense to lay the binder course now. Doing so enables project manager Consigli Construction to ensure the quality of the pavement preparation.

“You can put loads and wear on it, and find any soft spots in time, so when you put the finish coat on, you’re solid,” Streifel explains. Moreover, “you want a working surface that’s not mud, in the winter especially.

“And it provides the crews with more options to park on site, which is definitely a concern as we add more and more workers to the job.”

And then, in a case of vibratory roller redux, the pavers will move across Franklin Street and do it all again at 55 Campus. That’s the timetable for the Campus Life Project: In general, unlike Las Vegas, what happens at 65 Campus happens all over again at 55. 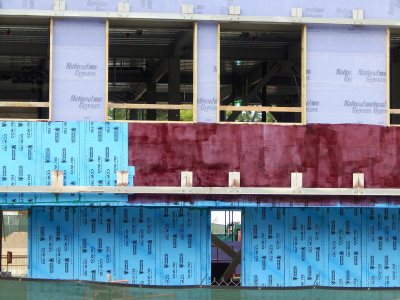 Lavender gypsum board, Dodger blue vapor barrier and the burgundy adhesive that holds them together. 65 Campus Ave. on July 24, 2015. (Doug Hubley/Bates College)

What else are we seeing that we’ve seen already?

The concrete crew started pouring floor slabs at No. 55 in mid-July, and finished up its work once and for all on July 29, as the yellow Northeast Concrete boom truck and the nimble ride-on trowels returned to finish out the fourth floor. 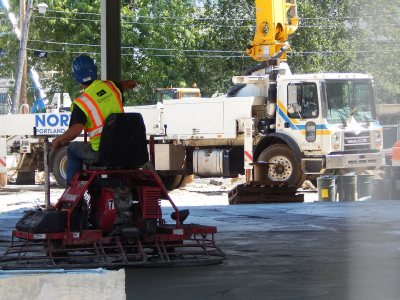 More fun with the ride-on trowel — one of three that were smoothing fresh concrete on the ground floor of 55 Campus Ave. on July 16, 2015. (Doug Hubley/Bates College)

In early August, plan to look up as new layers start to appear over the silvery metal roof decking at No. 65. Lots of layers: The roof system is a Dagwood sandwich that incorporates both gypsum board and oriented-strand board (a wood product); stick-on films that block infiltration of air and of water in its various states; insulation; and finally, asphalt shingles.

You may have noticed that each building has a conspicuous opening in its roof. Those are “mechanical wells” — essentially fourth-floor spaces, open to the elements, where ventilation equipment will be located. 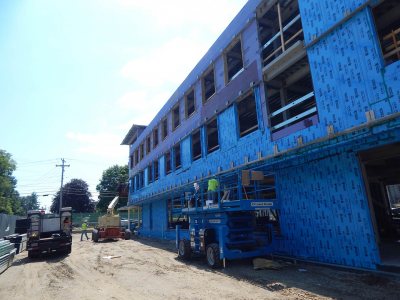 Having climbed both the fiberglass ladders and the scaffolding stairs that provide access to the upper floors of the residences, we can express our appreciation for another installation that metalworkers are doing: permanent stairs. Though not completed, one permanent stairway is already in place, at the west end of 65 Campus Ave.

Finally, there’s wall work. At No. 55, the exterior wall studs are just starting to go up — but at 65, that work’s nearly done, and roughly half of the structure has been sheathed in gypsum board. 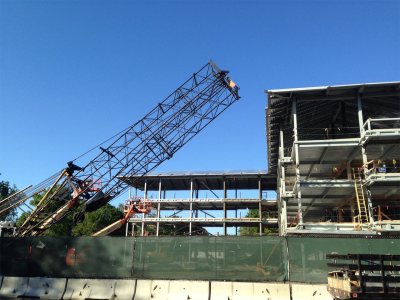 Workers next coat the dull lavender wallboard with a burgundy adhesive, which in turn is covered with a plastic weather barrier in an attractive Dodger blue. All in all, a feast for the eyes and a challenge to one’s vocabulary of color names.

Masons will start to conceal it all behind a brick façade in early August, as described previously. Between the two buildings, bricklaying will continue into the winter, with window installation to follow. But let’s not think about winter yet.

The boom times are over: The June 26 topping-off ceremony put a ceremonial end to the hanging of steel for the Campus Life residences. But we knew the steel chapter was really over on July 30, as Chelmsford Crane Services dismantled the mighty Link-Belt crane that had hoisted into place the 635 tons of steel that’s holding the buildings up.

The crane was removed on July 31, after more than three months at Bates. Too bad: No matter how far afield you might wander, the crane, like the Eiffel Tower, was visible from such a distance that you could always find your way back to campus.

Can we talk? Campus Construction Update welcomes your questions and comments about current, past and future construction at Bates. Write to dhubley@bates.edu, putting “Campus Construction” or “Mmmmmm, Dagwood sandwich” in the subject line. Or use the 21st-century commenting system below. 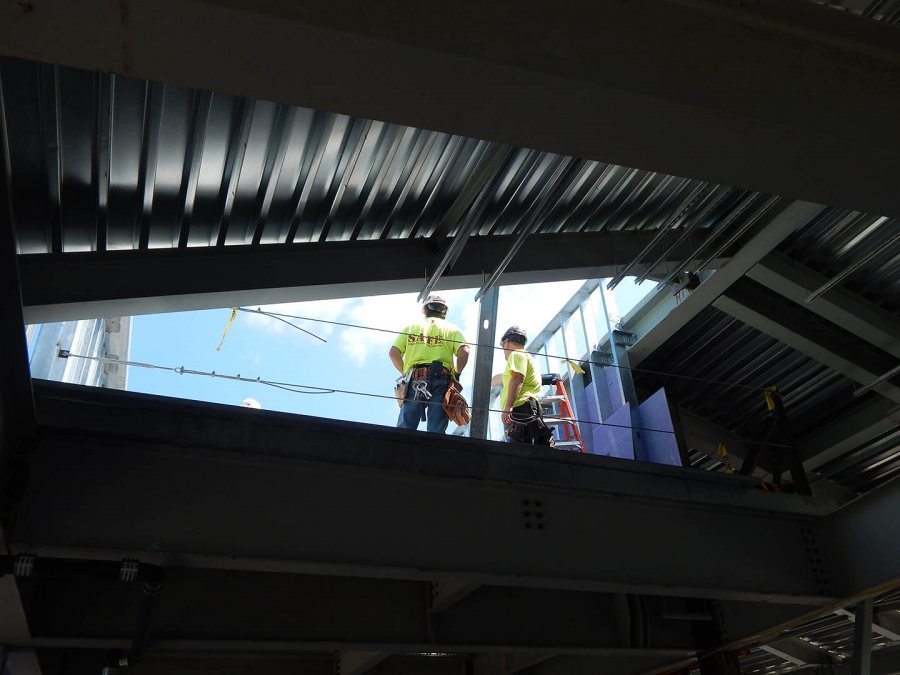 Engineers stand in the future “mechanical well,” where air handling gear will be located, at 65 Campus Ave. on July 28, 2015. (Doug Hubley/Bates College)