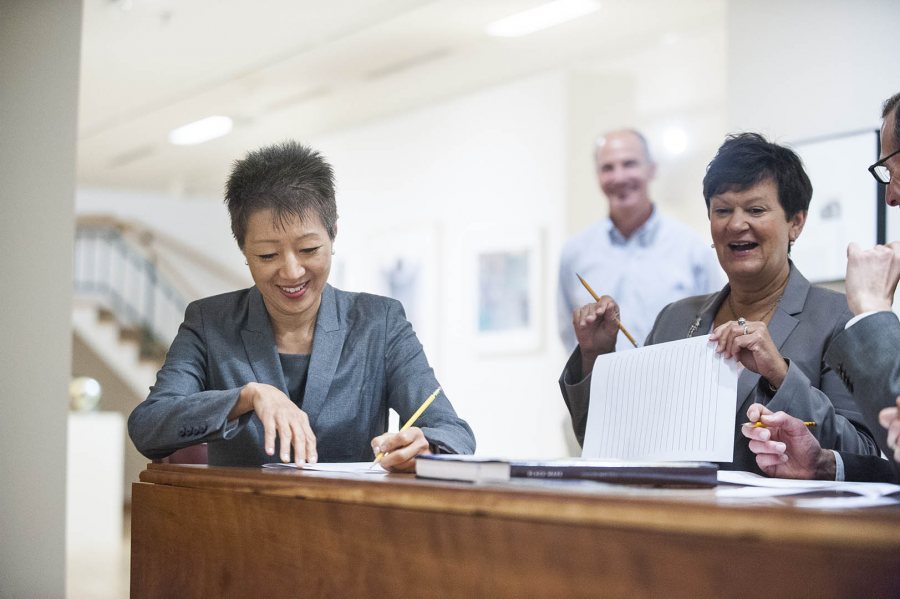 “She cheated! She worked ahead!” laughed Julie Richard, executive director of the Maine Arts Commission, as one of her companions in an art-and-writing exercise at the Bates College Museum of Art took the lead.

The culprit was Jane Chu, chairman of the National Endowment for the Arts, who was visiting the museum on Aug. 11 as part of a three-day tour of Maine arts presenters.

Anthony Shostak, the museum’s education curator, gave more than a dozen visitors in Chu’s party a demonstration of a unit in the Thousand Words Project. Offered to pupils in the local public schools, the project uses visual art to enhance learning across the curriculum. 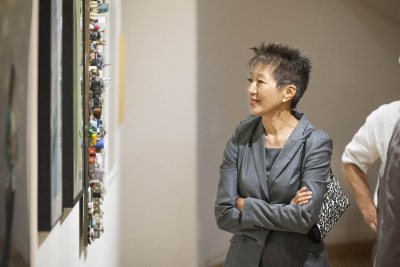 Chu and the others were assigned to make a nouns-only list of the plants and animals that appeared in a still life. (The local students who complete the exercise layer on additional parts of speech as an incremental approach to learning to write about art.)

“I’d gladly work with you guys for a couple of hours,” Shostak told the visitors and their Bates hosts at the end of the brief exercise.

During her Maine tour, Chu stopped at NEA-supported arts organizations in Portland, Brunswick, and Waterville as well as Lewiston.

In addition to Richard and an NEA aide, she was accompanied by staffers for U.S. Reps.  Chellie Pingree and Bruce Poliquin of Maine’s 1st District and 2nd District, respectively.

Pingree and the Maine Arts Commission invited Chu to the state.

The Bates museum and the Bates Dance Festival are longtime recipients of NEA support — 25 consecutive years’ worth for the latter, as Director Laura Faure pointed out to Chu. Faure showed two festival videos, while Shostak, museum Curator Bill Low and Director Dan Mills showed the visitors around the museum.

Also on hand were Michael Reidy, Bates’ managing director of theater and dance, and Matt Auer, vice president for academic affairs and dean of the faculty.

The visit included a discussion about Bates’ artistic offerings and particularly their community focus. “We have been more intentional than ever about trying to lift up community engagement,” said Darby Ray, director of the college’s Harward Center for Community Partnerships.

For her part, Chu described recent NEA initiatives, including a project to collect Americans’ stories about how they have been influenced by the arts. Timed to mark the signing of the legislation that created the NEA 50 years ago, the stories will be published starting Sept. 29.

The project “shows that the arts are thriving,” Chu said. “It really shows the formidable presence of the arts in our lives.”