Bed, Bates, and beyond as mattresses head to Aroostook County to help others

Because Bates went to the mattresses, in a sense, over the summer, swapping out more than 700 mattresses in student residences, some families in Northern Maine might soon be sleeping better. 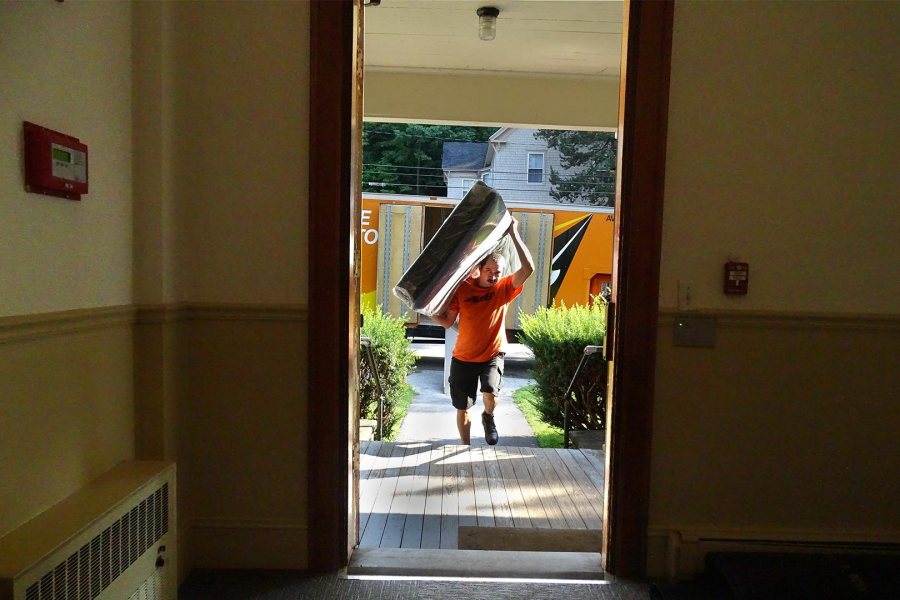 Out with the old and in with the new, as workers deliver new mattresses to Webb House on Frye Street on Aug. 18, 2015. At the same time, they removed old mattresses, which were donated to Catholic Charities Maine to support its programs in Aroostook County. (Photographs by Jay Burns/Bates College)

As the old foam mattresses left campus, nary a landfill got filled. Instead, the mattresses were hauled far north, to Aroostook County, where Catholic Charities Maine will sell them from three thrift stores in the county.

The money made in CCM thrift stores, in turn, supports the organization’s food bank, which supplies 25 food pantries in the county. “We literally turn furniture into food,” says Dixie Shaw, CCM director of hunger and relief services. “People get beds for their children, and we get food for their tables.”

David Larrabee, who oversees the operation for Bates Facility Services, explains that while Bates has, in the past, donated a small number of old mattresses to other nonprofits, including summer camps for economically disadvantaged children, for big jobs like this the college bunks up with CCM.

The new mattresses are inner-spring, while the ones they’re replacing were an older foam style. Larrabee has been testing out the new model by installing it in a few rooms on campus, “and the feedback to Student Affairs has been good,” he says. 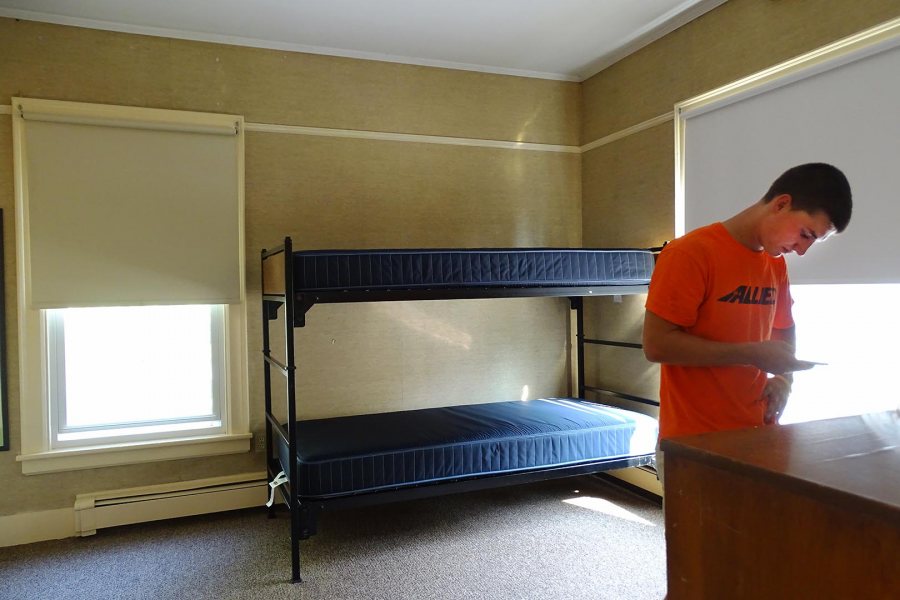 Regardless of comfort, it was time to replace the old ones. “Some are up to 15 years old,” he says. “At least none have straw.” Meanwhile, the 950 or so student mattresses not being replaced this time around are a newer, memory-foam style that are “still in very good shape,” he adds.

This summer’s new mattresses, the “Life Safety II Comfort” model, come from Bourdon’s Institutional Sales in Claremont, N.H. Economically priced at $128 per mattress, they measure 36 inches by 80 inches and are 8 inches thick. (For all you parents planning to buy sheets for your first-years, that size is equivalent to twin extra long.)

As the workers pulled out the old mattresses, they also set aside many of the plywood bedboards. “With the new mattresses, there shouldn’t be a need for bedboards,” said Larrabee.

Though if the bedboards go away, it might affect students more during waking hours. Conveniently sized, they’re useful tabletops for parties. Sure enough, one of the boards in Moulton was decorated end to end with happy birthday wishes.

The old mattresses were hauled to a staging area, in Underhill Arena, where they were picked up the next day by a CCM truck

As the driver got ready to leave, his truck filled top to bottom with mattresses (as opposed to 22,000 pounds of donated french fries on another trip), Larrabee helped him shove a stack of plastic recycle bins into the passenger seat.

That was another Bates donation, a few of the 200 bins that CCM volunteers are now using to harvest vegetables — rutabagas, beets, and squash — grown on donated land.

Known as the Farm for ME program, the veggies supply the CCM food bank.

“Donations from Bates go so much further than you can imagine,” says Shaw.