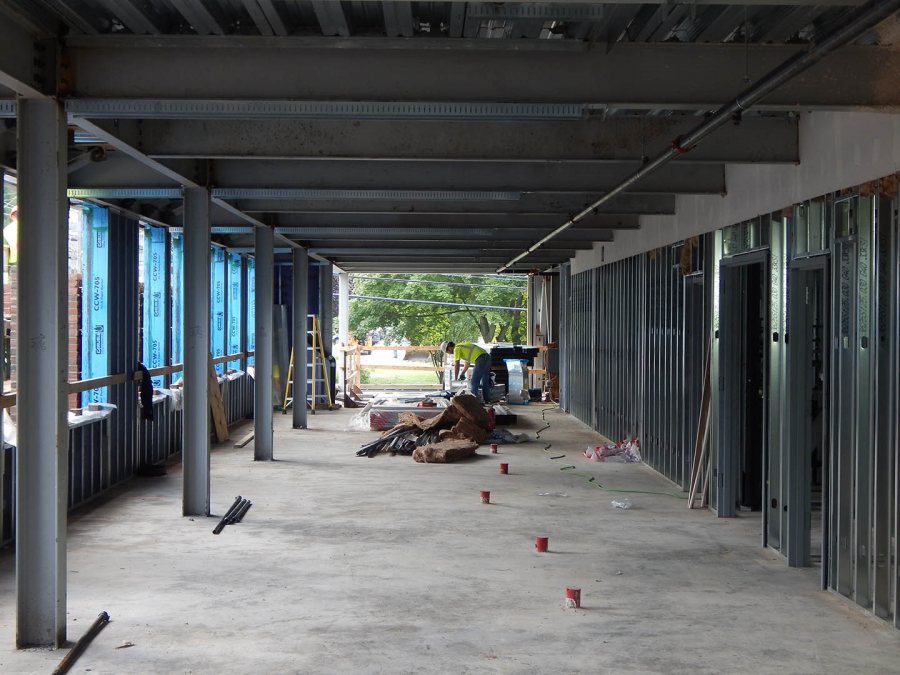 A wall framer at work on the second floor of 65 Campus Ave. on Aug. 26, 2015. The enclosed space at right is part of the building core. Visible beyond are the grounds of Lewiston Middle School. (Doug Hubley/Bates College)

Campus Construction Update is eyeing a deadline just minutes away.

Meanwhile, Consigli Construction, general project manager for Bates’ Campus Life Project, is looking ahead three or four months to winter, no doubt recalling the previous edition and its seemingly inexhaustible cold and snow. Not much fun for folks in the building trades. 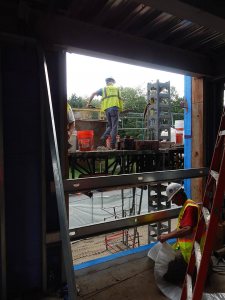 Employees of Maine Masonry at work on the second story of 65 Campus Ave. on Aug. 26, 2015. (Doug Hubley/Bates College)

But “my mantra has been, ‘Summer is coming,'” laughs Chris Streifel, who manages the construction of the two new residences on Campus Avenue for Bates. Of course, Streifel is talking about summer 2016, when he and Consigli will be racing to get the residences ready for occupancy by the start of school.

“We’re looking at the end game,” Streifel says. “We’re planning out into next summer, which should be a very busy time for Bates.”

Why busy? “We’ve got to move in, right? And that’s going to be a big process.” That move will involve accommodating 243 students, as well as relocating the College Store and Office Services, now quartered in Chase Hall and Lane Hall, respectively. The move will entail everything from selecting, purchasing, and situating furniture to acquainting Facility Services tradespeople and custodians with the new buildings at 55 and 65 Campus Ave.

“There’s a tremendous amount that will need to take place in a very compressed time frame next summer as the contractor wraps up and moves out, and we move in,” Streifel says. Looking ahead a full year is “not any too soon.” 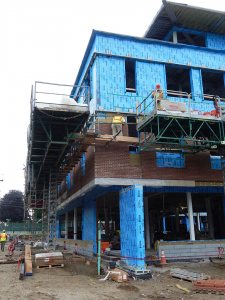 Of course, there’s another deadline that everyone on campus has in mind, and that’s the start of the forthcoming school year, on Sept. 8. “Given that we’re about to have a whole host of new and returning faculty, staff, and students on campus,” Streifel says, “certainly we want to present a good image.

“We’re tidying up the construction sites as best we can. Consigli’s been trimming back the weeds that grow in the nooks and crannies. But all along they’ve done a good job of keeping a clean site in general, so it’s not a lot of extra work to button it up a little tighter.”

Meanwhile, outside the construction fence, work is about done on the subterranean duct bank alongside Central Avenue, near the Gray Cage. Not a place where Donald, Daffy, and the AFLAC pitchman keep their money, the duct bank instead is a bundle of four 4-inch PVC conduits, encased in concrete, that will carry copper telephone lines and fiber optic data cables from the new dorms to a hub at Alumni Gym. The cables won’t be threaded through the conduits till after snowmelt next year.

The remaining visual evidence from that work is a nice new granite curb, with a grassy border just planted, rounding the corner from Campus Avenue onto Central Avenue. This new landscaping extends along Campus all the way down to Carnegie, incorporating the new “bumpouts,” or lateral extensions of the sidewalk at the crosswalks, that will make it much safer to traverse the busy avenue. 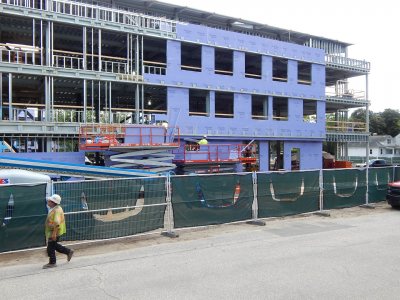 Speaking of roadways, no closures related to the Campus Life Project are scheduled for the immediate future. 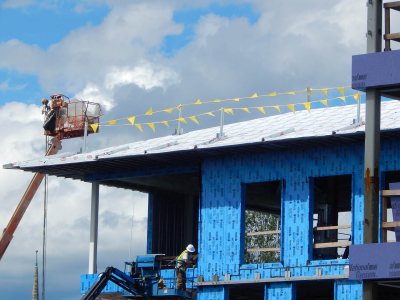 Sometime in the next month or two, though, expect partial closures on Bardwell Street and Central Avenue while gas lines are laid. And that work, Streifel says, will pretty much finish off Campus Life Project work outside the fence until spring 2016.

At No. 65, workers are charging ahead with the building’s exterior envelope. The metal decking on the peaked roof sections has been covered with a heavy weatherproof film, and the first layer of substrate is being applied — although a rainy August has somewhat frustrated the roofers. 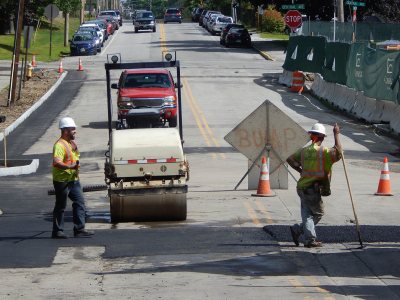 For much of July and August 2015, Campus Avenue was closed for utilities work related to the Campus Life Project. This image is from Aug. 13. (Doug Hubley/Bates College)

You’ve noticed flat areas on the fourth floor of No. 65 that look like the most enticing kind of balconies (similar to the penthouse balcony here at BCO headquarters, but without the potted tropical flowers). In fact, those long expanses are not balconies but are flat roofs, thusly designed for aesthetic reasons, and there will be no access to them.

Anyway, their coverings are done, thanks to the miracle of EPDM, or ethylene propylene diene terpolymer — synthetic rubber which comes in thick sheets and is relatively fast to install.

On the 65 Campus Ave. walls, meanwhile, workers from Maine Masonry, of Scarborough, are creating facades from dark gray granite, precast concrete trim, and extra-long “Norman” bricks. (A fourth type of surface treatment, the high-performance Taktl concrete panels, will be installed by a different team.) The Maine masons started work, on the Campus Avenue side of the building, during the second week of August.

Inside No. 65, other workers have made good progress framing out the walls around the building’s “core” — the central areas of each floor where bathrooms, the utility trunk lines, the elevator, and other mechanical services are concentrated. The framers start on student rooms next. 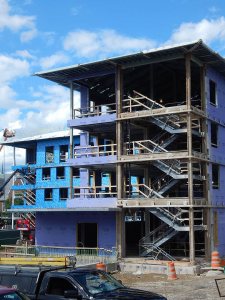 Next door at No. 55, the exterior studs and wall-boarding that began the second week of August is well underway, with the Dodger-blue vapor barrier rapidly gaining ground.

Again, if something happened at No. 65 that you want to see more of, just watch No. 55, because it will happen there soon. And there’s no point in betting on which building will be finished first, because No. 55 will always be behind.

But Streifel points out that while 55 is trailing 65 by about a month right now, it’s expected that the gap will narrow to about a week by this time next year. One reason for that, says clerk of the works Henry Gillert, is that much of the technology serving both buildings — heat, electricity, telephone, data services, etc. — will be based in No. 65, with pipes and conduits feeding 55. So there’s simply more stuff, and more technically involved stuff, to install at 65. 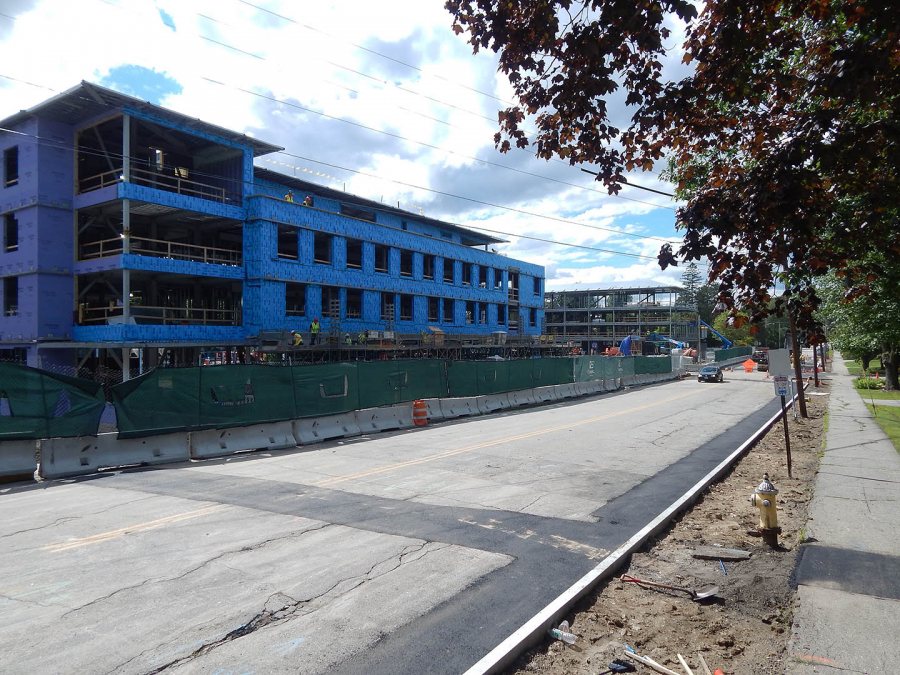