Vintage avian exhibit is a feather in Carnegie Hall’s cap

The nameplate says it’s the Waterman Collection. That would be Willard H. Waterman of Auburn, an avid birder of the early 20th century and a longtime director of the local Stanton Bird Club, which gave the collection to Bates many years ago. 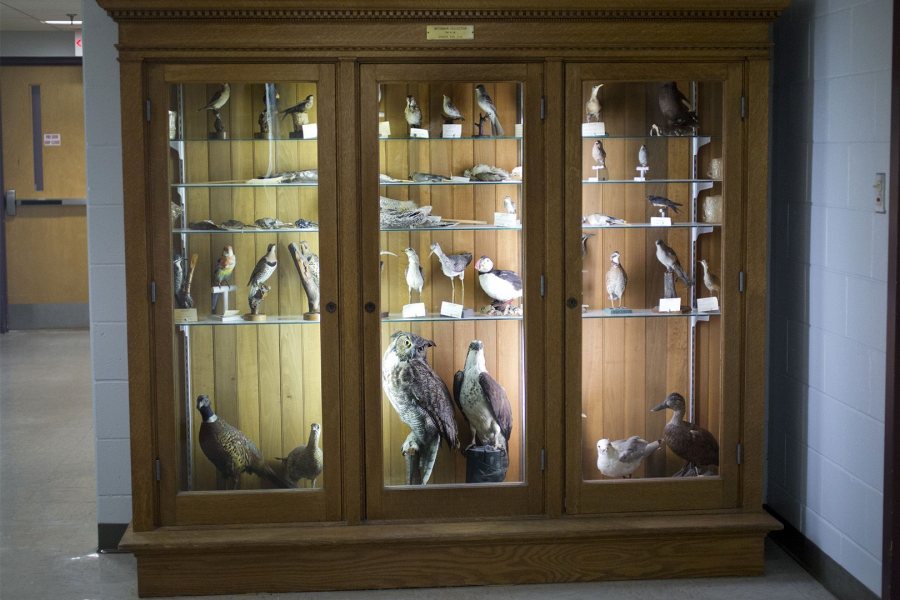 The bird club is named for legendary Bates professor Johnny Stanton (1834–1918), a polymath who taught ornithology, among other topics, and had a tradition of taking students on regular outings and bird walks.

Stanton assembled his own prodigious collection of stuffed birds, and in the photograph below he poses with his birds in Carnegie Science Hall shortly before his 1918 death. 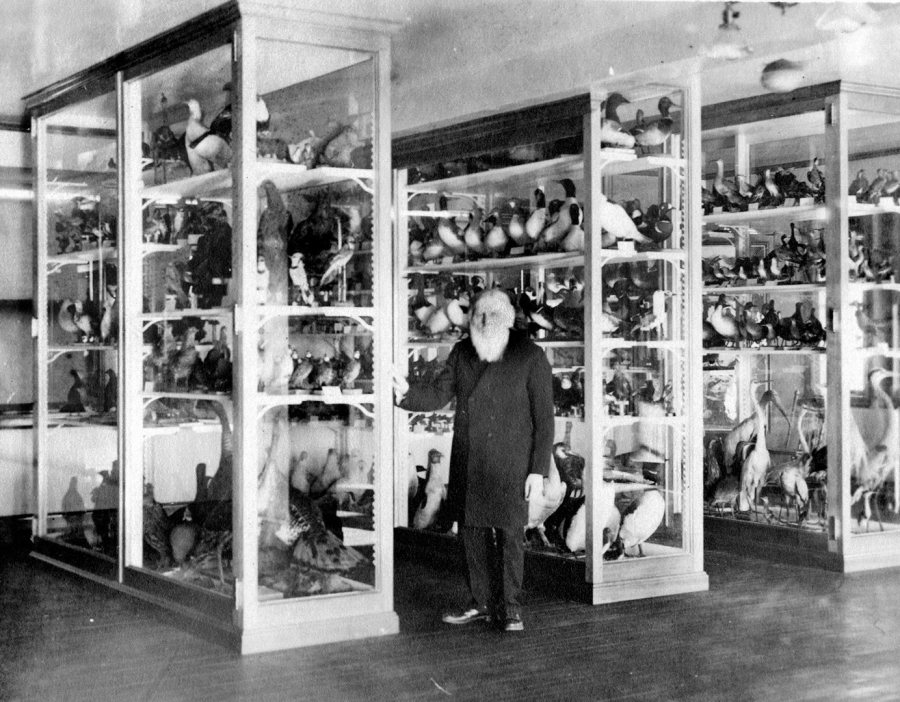 Jonathan Stanton poses with his bird collection in Carnegie Science Hall in this circa 1918 photograph. (Muskie Archives and Special Collections Library)

Most of Stanton’s collection went from Bates to the Maine State Museum around 1980 but a few specimens stayed behind, and they share the Carnegie display case along with Waterman’s birds.

The style of the tag on this common bullfinch, Pyrrhula pyrrhula europoea, indicates that it was part of Stanton’s collection. 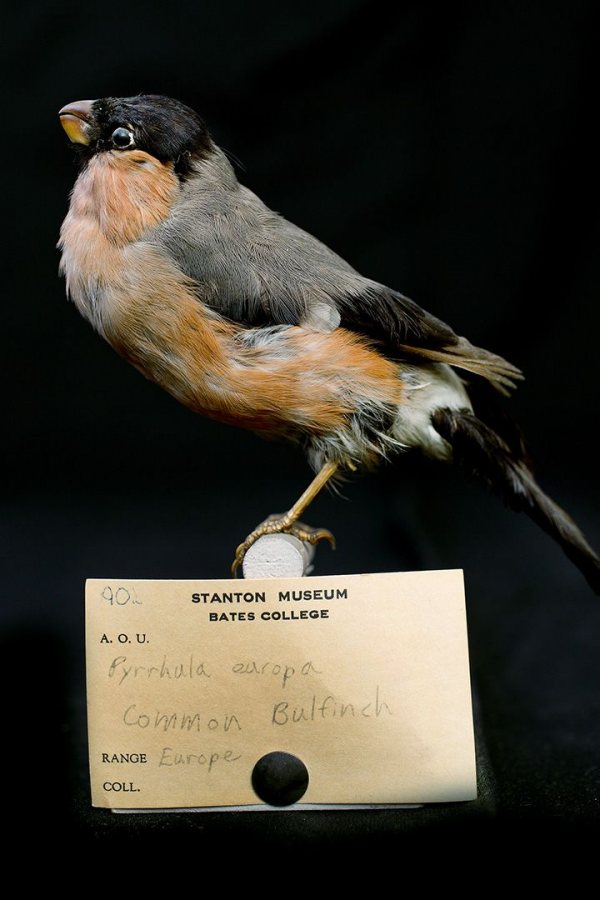 Though preserved birds are used in Bates classrooms and research today, these older birds aren’t — arsenic was likely used to preserve them.

And while Stanton collected a lot of specimens from around the world (Bates publications of his era say he netted the kestrel in his collection while tramping about the ruins of the Parthenon), his collection never was particularly useful to later researchers. Besides the poison problem, the tags on his specimens all lack dates and locations.

The tag on this Atlantic puffin, Fratercula arctica, is of a different and, perhaps, better style, telling that the bird was taken on July 10, 1949, on Herring Island, famous for its puffins, off Labrador. 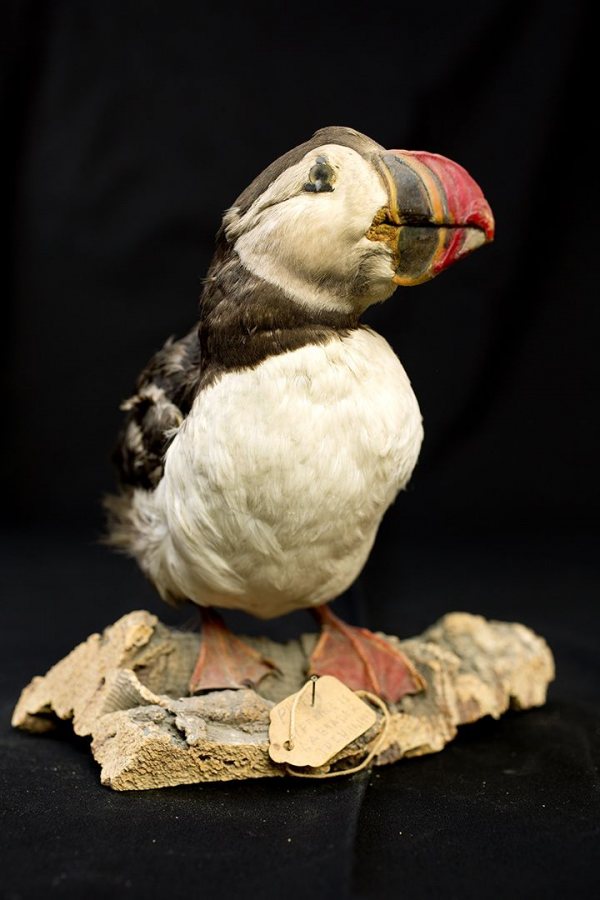 Bates does maintain a varied collection of bird specimens that are safe for teaching and research, including this snowy owl, Bubo scandiacus

Its tag says that the bird was found dead in 1991 in Rangeley, Maine, and also gives the bird’s weight (1,110 grams) and says that starvation was the cause of death. 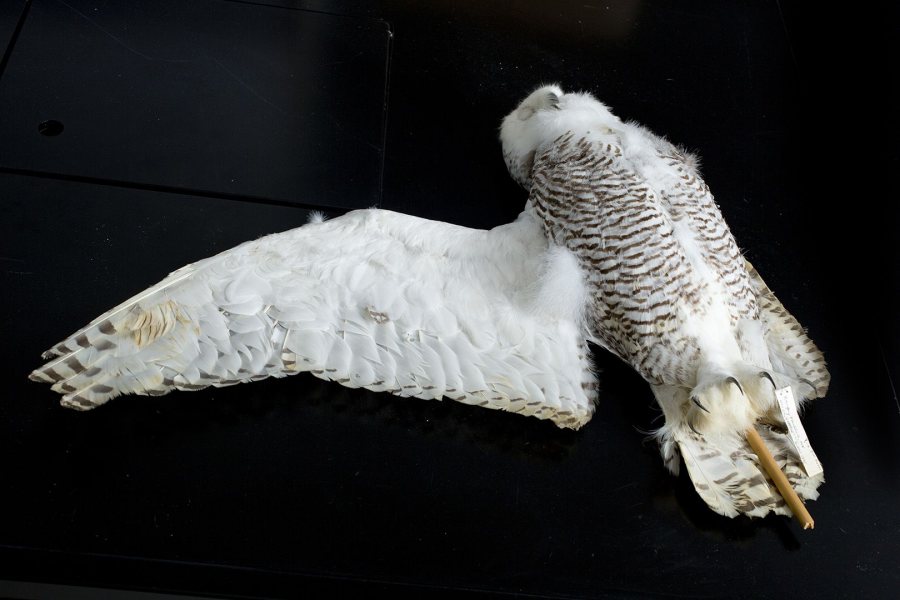 As a healthy snowy owl weighs between 1,400 and 3,000 grams, explains Bates Professor of Biology Don Dearborn, finding a bird weighing just 1,100 grams would be a clue that starvation did it in.

Other clues would be a “lack of subcutaneous fat and, more extreme, reduced size of major muscles due to catabolism, when an organism meets its metabolic needs by breaking down its own muscle.”

Catabolism can happen when an animal is badly injured and unable to obtain food.

“A broken wing would do that,” Dearborn suggests. “If the bird could get to a safe perch, it would then slowly starve. A rotten way to go.” 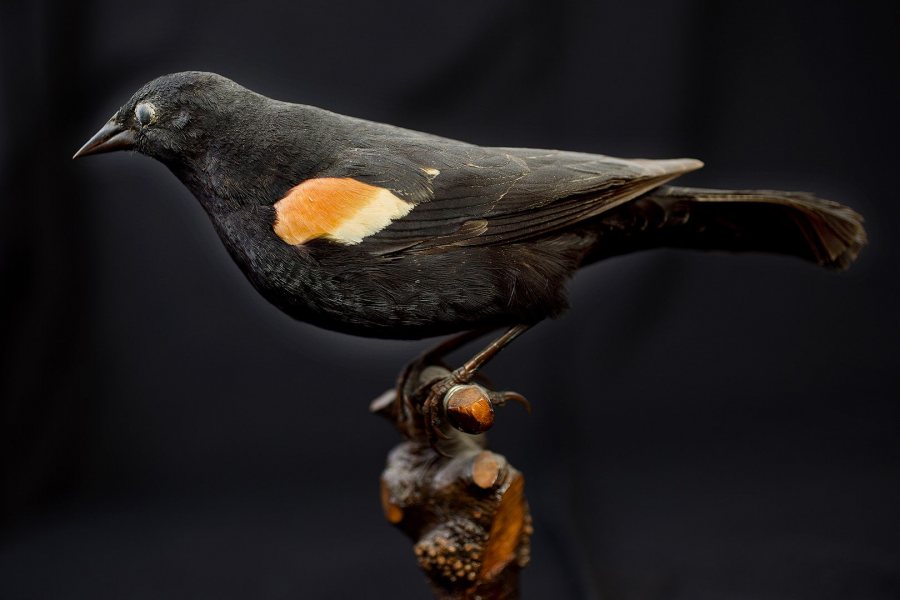 In his research, Dearborn and colleagues have used museum specimens to make a discovery about red-wing blackbird feather colors.

They found low levels of the hormone corticosterone in their feathers correlates with brighter red epaulets.

Since bright epaulets attract females, and since birds release corticosterone when they are stressed, it might follow that a stressed male with less-bright epaulets will have trouble finding a mate — which is sad for the male but, under Darwinian thinking, the way it goes.

Here are a few more images of birds in the Woodman display case: 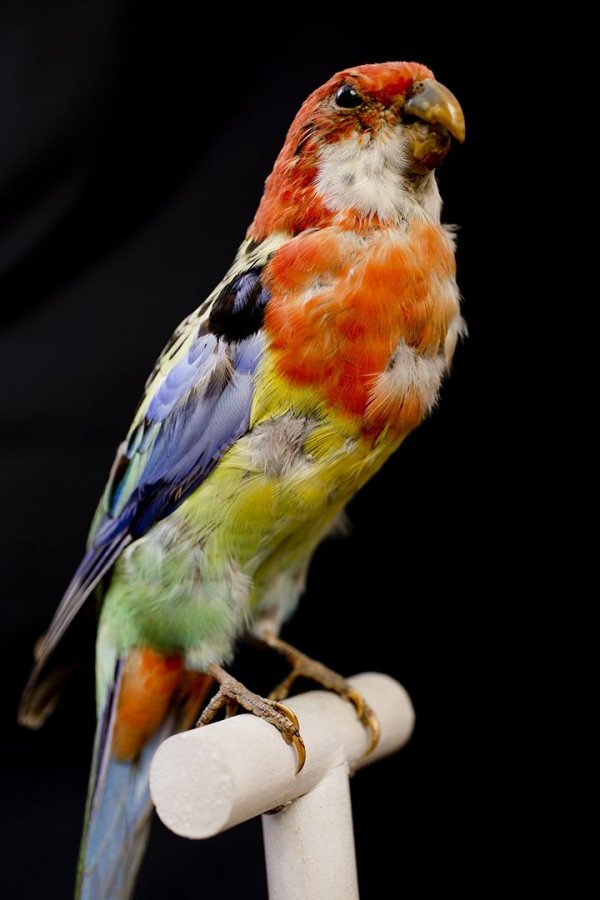