A temporary HVAC unit about as big as a shipping container filled in for Carnegie’s penthouse installation during the three-week project.

“We did some initial testing on Tuesday, and we needed Wednesday to get everything else together,” said Chris Streifel, project manager for Bates Facility Services. “Then at 6 a.m. Thursday, we turned off the temp unit, and never had to turn it back on.” 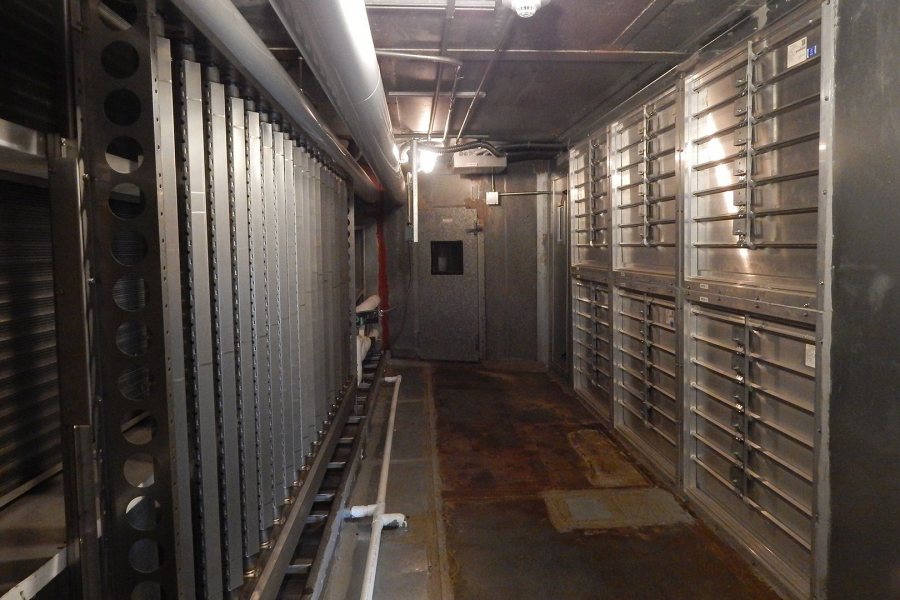 Refitted with new fans, coils for heating and cooling air, and other things that we have a harder time explaining, the system is running “just like it should be,” Streifel said this week. Technicians from Thayer Corp. and Dynamic Air Corp. will return next week for fine tuning, aiming to refine and balance the flows of air into and out of the building. 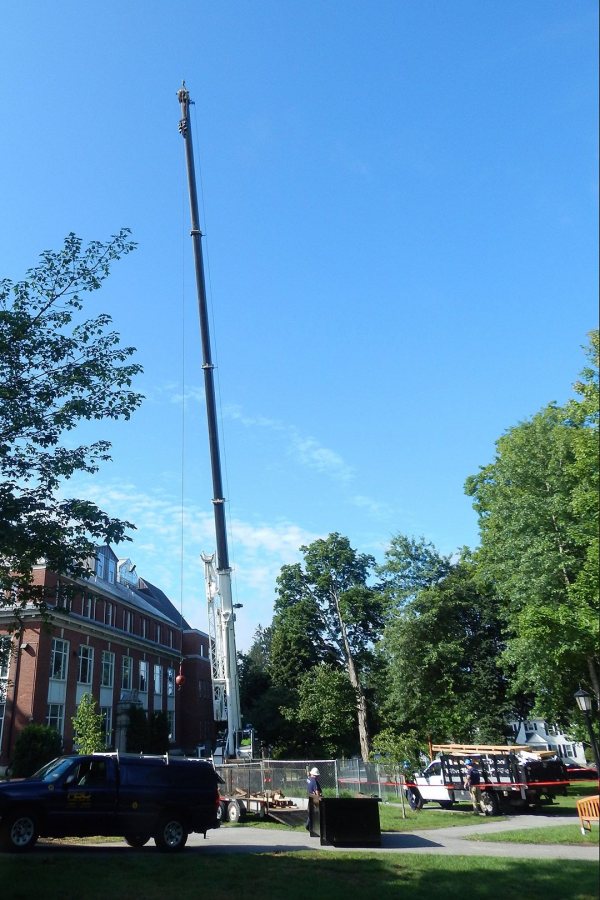 A Cote Corp. crane removed construction debris and tools from the roof of Carnegie Science on Aug. 2. (Doug Hubley/Bates College)

“That could help control the air pressure in the building a little more tightly,” said Streifel. “Then we’ll do performance checks to confirm that we’ve hit our goals for what the system can do — how much air can we move through it, how much air can we chill, how much capacity do the new coils have?”

The two new coils, one for warming and one for cooling, use water to alter the temperature of air entering the building. The performance tests make use of instruments that measure airflow through the system, and temperatures of both air and water as they enter and leave the system. A mechanical engineer can use that data to calculate system performance. Streifel points out, though, that early testing suggests the system will meet or beat its goals.

Aside from that, the next couple of weeks will be spent training Facilities Services staff to run and maintain the system, and returning research operations that were relocated for the project to their rightful places. Somewhat later, the advent of heating season will necessitate another round of HVAC tests, as Carnegie is warmed by air from the unit. (The water for the heating and cooling coils is supplied independently of Carnegie’s tap water.) 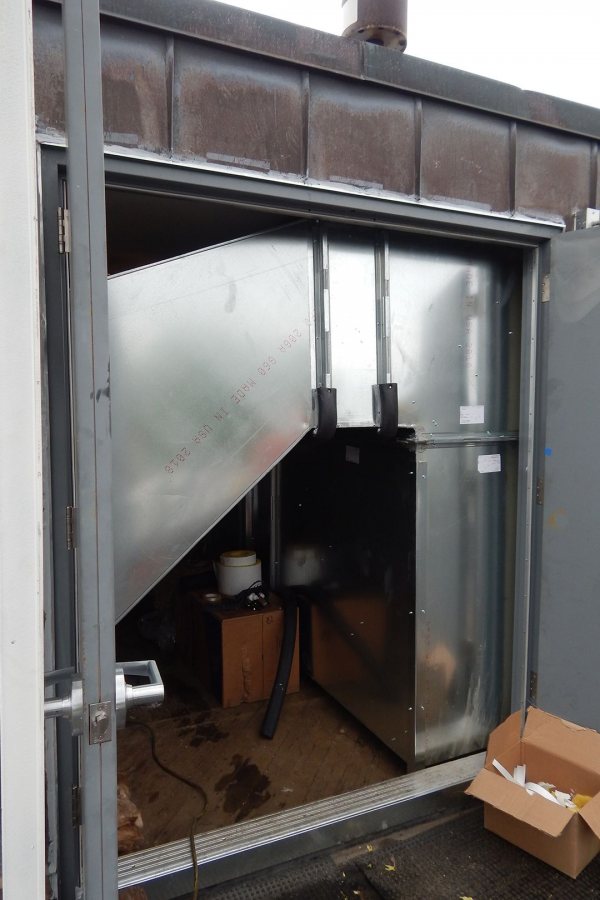 A duct for incoming air dominates this access space to the Carnegie Science Hall HVAC unit. Photographed on Aug. 9, 2018, shortly before the unit was switched back on after a three-week overhaul. (Doug Hubley/Bates College)

Over the course of three 70-hour (or more) workweeks, the workers from Thayer and the subcontractors on the HVAC job “were amazing,” says Streifel. “They nailed it — really met every one of our expectations, and more.”

Now you’re in hot water: Carnegie must be blushing from all the attention it’s gotten this summer. Even as Thayer and DAC were going hammer and tongs on the HVAC work, plumbers for Damon Mechanical were wrapping up the replacement and expansion of Carnegie’s hot water service.

As we’ve reported, the goal was to both replace deteriorating pipes and add a whole new pipe complex that would convert the system into a recirculating loop, getting hot water to users faster.

In addition, the hot water storage tank was to be relocated from the first to the fifth floor, moving it near the water boiler. Together again for the first time! And finally, that gas-fired boiler was reconfigured for year-round use, replacing campus steam for making domestic hot water in Carnegie. 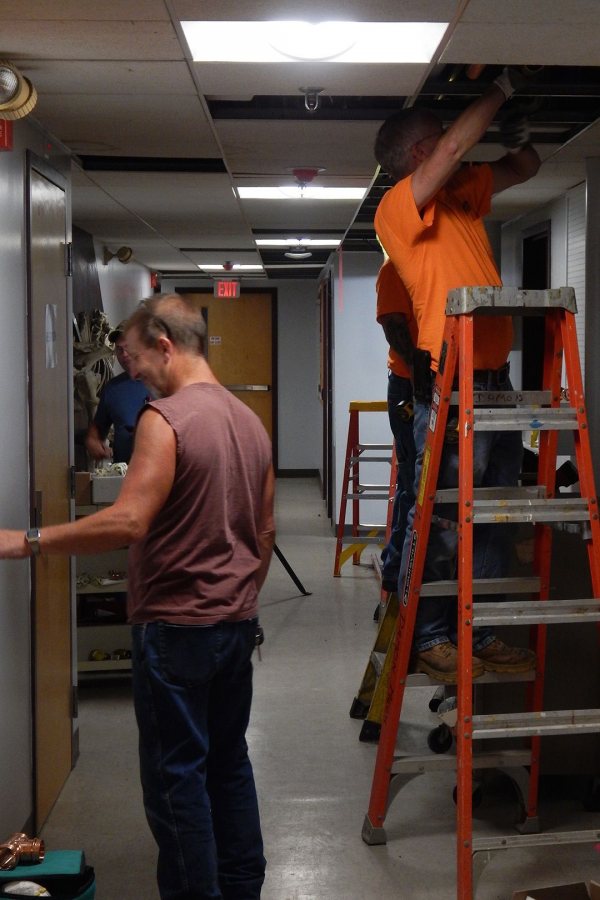 The tank-and-boiler work was completed in mid-July. Pipe installation and insulation got done during the week of July 30, making hot tap water available for the first time since early June. (Temporary hot water sources had been stationed in a few critical areas.)

Aside from cleanup, the final step here, too, was balancing the system — “adjusting valves so the water flows to the right locations,” explained Alan Kelley, Bates’ manager for the project. That balancing act was performed this week.

The project was pleasantly free of surprises. The biggest challenge, if an entirely predictable one, was adjusting pipe courses to fit Carnegie’s crowded utility paths above ceilings, in closets, etc. “There’s just so much congestion with conduits, ductwork, exhaust hoods, and things like that,” Kelley explained.

Pipes and obstructions, Part II: We’ve learned more about an unexpected development in Kelley’s other large-scale summer project, the replacement of underground utilities along North Bardwell Street. We told you about the unmapped telecommunications conduit that forced a change in the routing for a section of new steam main.

As changes in plan so often do (making us dislike them all the more), this produced yet another wrinkle. In the original plan to replace the North Bardwell steam mains, all the old pipes would be abandoned in place. That’s because those pipes have asbestos insulation and removing them would require abatement.

Wouldn’t you just know it: The revised route for the new steam main between Wentworth Adams Hall and Olin Arts Center conflicts with those old pipes. So they’ll need to be yanked out and abated after all. That necessitates enclosing the street excavation with a tent, storing debris in sealed dumpsters, and other precautions. The experts of Acadia Contractors, of Turner, are at it now and should finish before school starts.

Closed since mid-June, this campus roadway providing access to Smith and Adams halls nevertheless opened for limited traffic last week, thanks to a base coat of asphalt applied early in the month. Asphalt pavements usually consist of a base coat and a top coat (which puts us in mind of the 1960s television cartoon show: “He’s the most tip-top / Top Coat”). 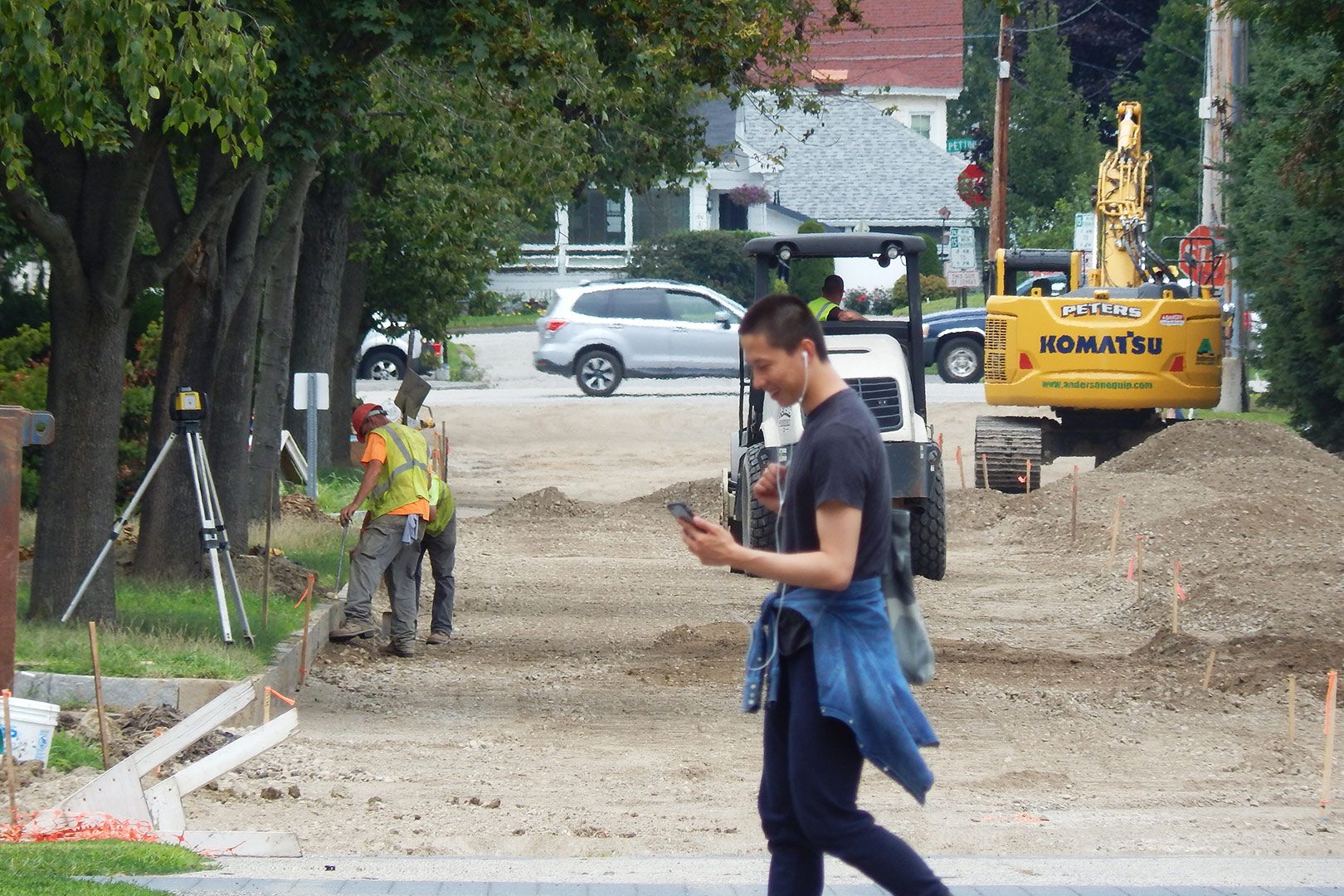 But in this case, it doesn’t make sense to place the top coat until after the steam work, when the road is buttoned up for good. That will be the most effectual top coat.

Meanwhile, crews from Granite State Curbing Setters of Pembroke, N.H., were around plying their eponymous trade . The new curbs will make a nicer impression than the old concrete parking bumpers, although those do make good paperweights. And speaking of cosmetic touches, a crew from Davis Landscape Co. came up the road from Lisbon to begin work this week.

Phases and stages: Under construction since June, the new extension on the Coram Library porch will provide a much more spacious stage for Bates officials to greet the campus community as school begins, just a few weeks hence. 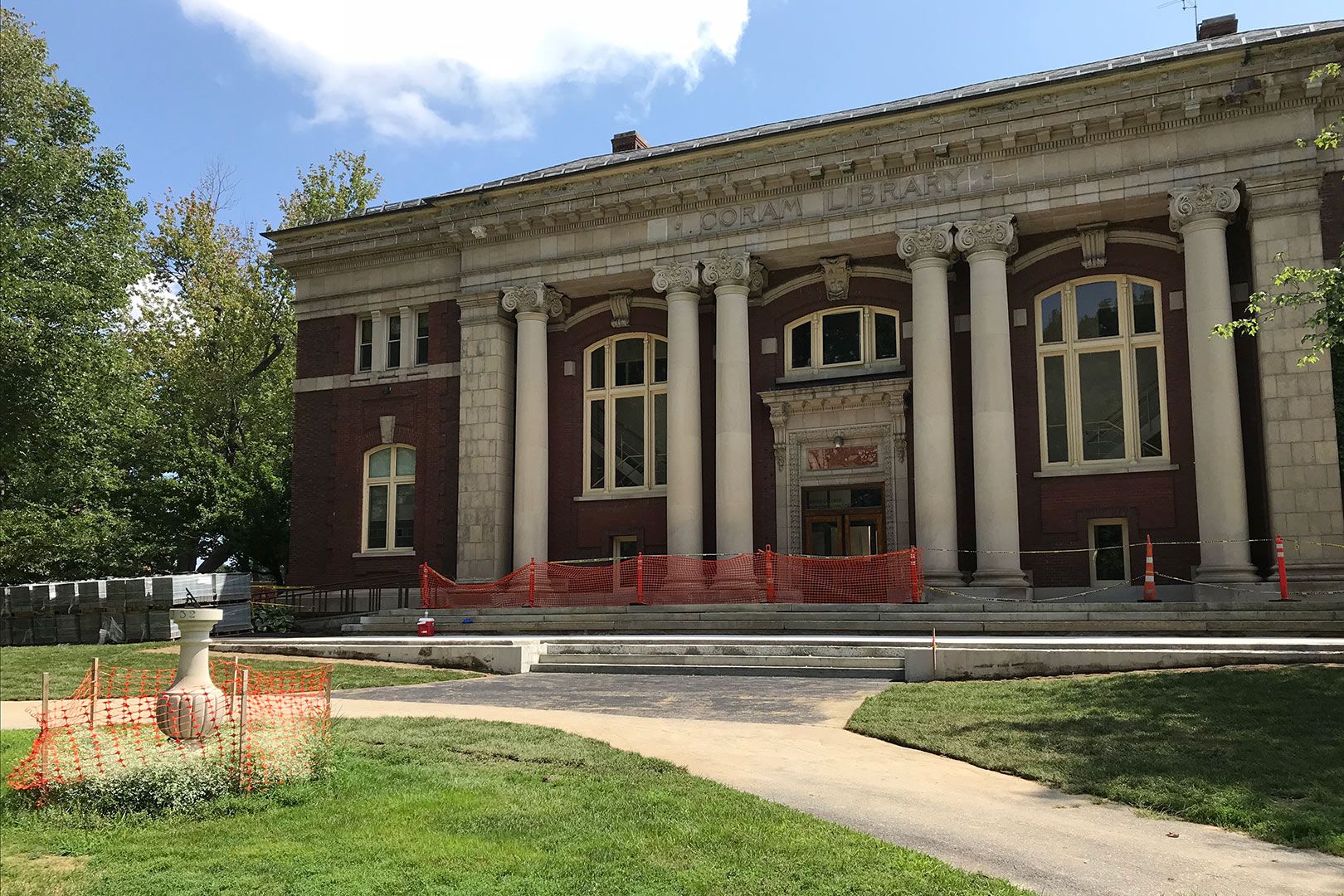 New sod and paving have prettied up the construction site at Coram Terrace. (Doug Hubley/Bates College)

With once-and-for-all completion of the Coram Terrace project now scheduled for later in September, as granite pavers are cut to order, the aim in the coming days is to make the porch functional and presentable for Opening Day on Aug. 27 and the Sept. 4 Convocation.

On the presentability front, Davis Landscape has bandaged construction scars with new sod; the construction fence has been removed; and new asphalt has restored Coram’s connections to campus walkways.

Functionality is just about there, too. On Aug. 6, the concrete artists of Sundown Construction Inc. poured a slab that will serve as the terrace floor until granite can be laid over it. We stopped by the following day, but the concrete was already too firm to scratch “CCU” into it and besides, it was covered with burlap that was wetted down periodically. 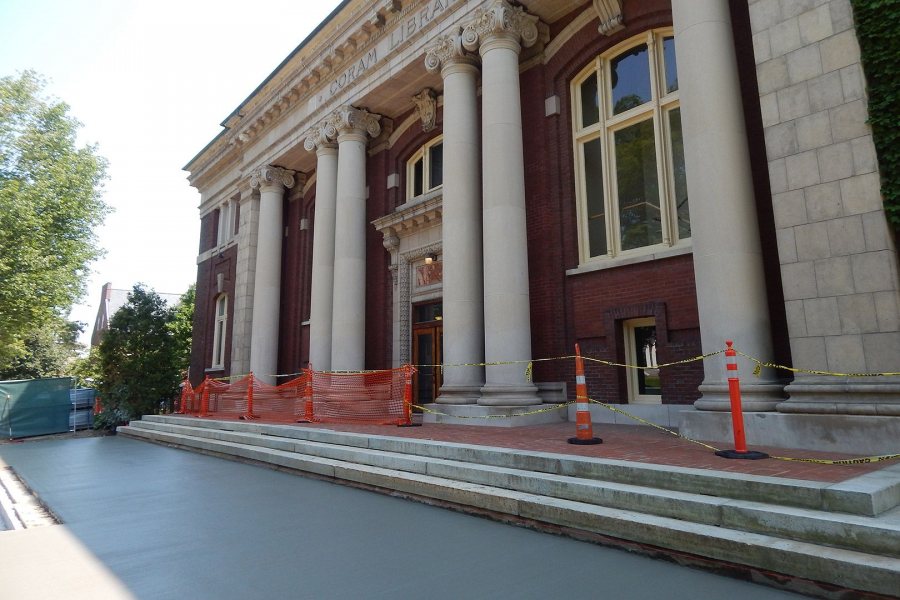 The Coram Terrace slab shortly after it was poured, on Aug. 6. (Doug Hubley/Bates College)

After taking away the sharp stick we had planned to use for our initials, project manager Paul Farnsworth explained that the burlap helps regulate the moisture level in the concrete as it cures. As you’ll recall, maintaining the correct proportion of water relative to other ingredients is key to the chemical reaction that makes concrete strong. The prevailing hot weather made the burlap especially important.

The extension measures 70 by 15.5 feet, and is a little less than 30 inches high. Once a course of 6-inch granite blocks is laid around its perimeter, the newly embiggened porch will make an appealing perch. “It will be a nice place to sit and dangle your feet,” Farnsworth said.

Getting in on the ground floor: The ongoing creation of new quarters for the Bates Communications Office on Lane Hall’s ground floor has entailed the remaking of several existing spaces that serve the entire building. And those facilities, which include a break room and a lactation room, are on track to reopen by the end of the month. 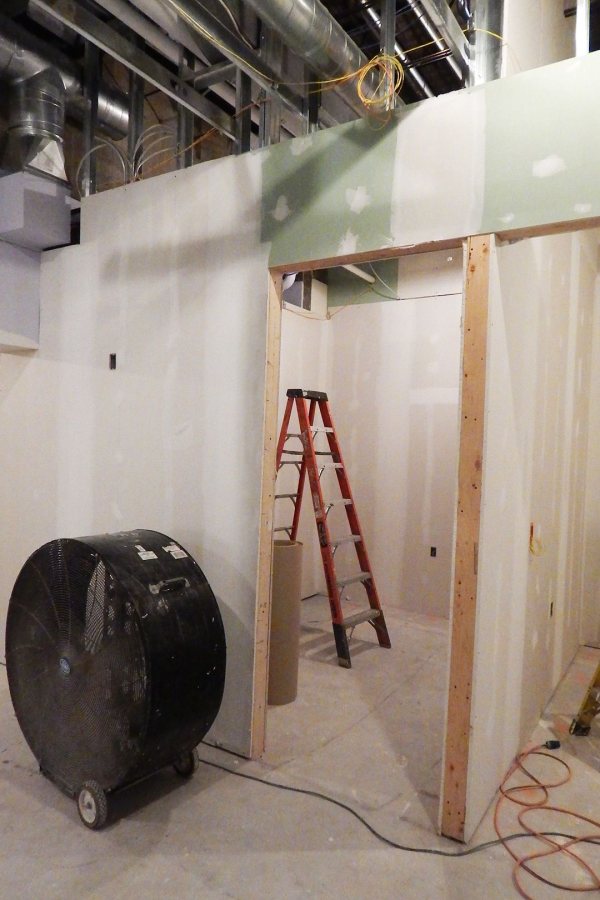 Accompanied by Project Manager Shelby Burgau, we toured the worksite on Aug. 9. The common facilities were in various stages of near-completion: wallboard up and painted, flooring down, yet still awaiting ceiling tiles and such final touches as switchplates. A trash-staging room and an ADA-compliant bathroom are the other two facilities.

Getting those in-demand spaces back into service has been the top priority in the Lane project. Construction of the BCO area, meanwhile, is on schedule, with completion planned for November. In the month since our last visit, plenty of new wallboard had been hung, taped, and mudded, and there was visible progress on the utilities front that included the outdoor placement of a water chiller for BCO’s air-handling system. (We’re looking forward to hanging around the water chiller and gossiping.)

Providing ventilation for the BCO space, Burgau noted, has been one of the easy parts of dealing with subterranean Lane, which extends back under Alumni Walk and is rumored to include a former fallout shelter. As this section of basement lacks windows but does have a concrete shell insulated by earth, “we don’t have the various heating and cooling conditions that you would normally be working with.”

“That has been one of the biggest factors in this project, and it played into how we designed the HVAC system.”

Can we talk? Campus Construction Update welcomes your questions and comments about campus improvements and 1960s cartoons. Please e-mail news writer Doug Hubley, stating “Construction Update” or “Close friends get to call him T.C.” in the subject line. 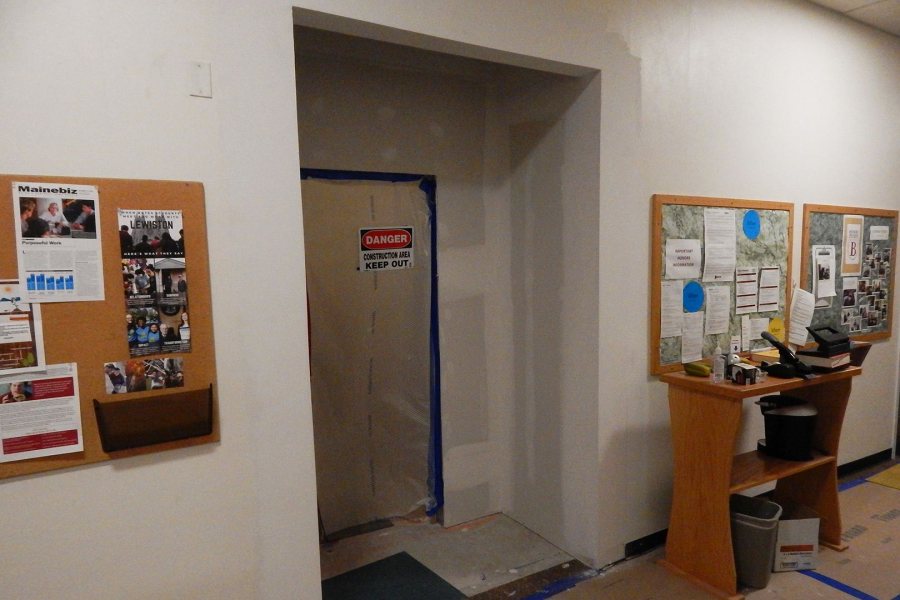 Once the door to Secretarial Services, where legions of seniors turned in their theses, this will become one of two entrances to the Bates Communications Office. (Doug Hubley/Bates College)