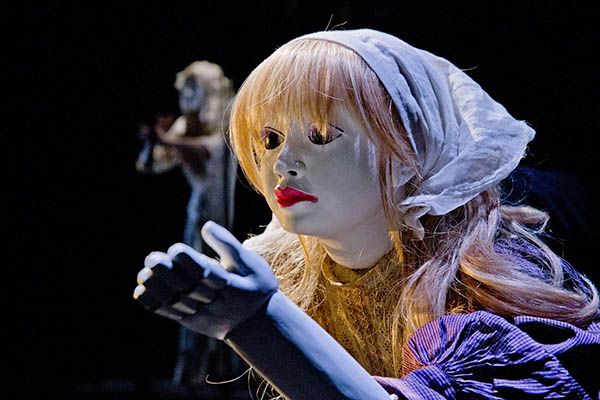 Admission is $15 for the general public and $10 for Bates College faculty and staff. Bates College students are eligible for free admission but reservations are suggested. Tickets can be purchased online.

“The first time I heard the little match girl passion,” says Figures of Speech artistic director John Farrell, “I felt a deep connection to the kind of visual theater that Figures of Speech has practiced from its beginnings, and I began to envision a theatrical setting for the music composed of puppets, masked actors and projected video.

“The performance elevates the suffering and death of the match girl to a spiritual plane, and it asks us to consider our relationship to the suffering of children everywhere.”

Farrell adds, “Our production takes the audience on a journey –– from the original story, through Lang’s inspired synthesis of Andersen and Bach, to our vision of the Grandmother as an embodiment of the cosmic feminine.”

Figures of Speech has toured the world for more than 30 years with original works created at the intersection of drama, poetry, sculpture and dance. John Farrell and his wife, Carol Farrell, co-founded Figures of Speech in 1982 to explore the interplay of puppets, actors, shadows, movement and masks. Carol Farrell is the supervisor of the Bates costume shop.

The company is known for psychologically rich, visually stunning adaptations of folk tales, classical myths and original works for adults. Figures of Speech is a four-time recipient of the coveted UNIMA Citation of Excellence, the highest distinction in American puppet theatre.