A bedraggled refugee tries to rouse a child after a boat has deposited them on some barren shore. The child is limp and unresponsive at first. Still alive? you wonder.

But suddenly the child awakens, looks around, and reaches for the grateful parent.

You believe this dramatic awakening — and that’s a testament to the power of puppetry, for the parent and child are puppet characters in this weekend’s performances at Bates by Sandglass Theater.

“We’re not manipulating the puppets to have them do what we want them to do,” explains Keila Ching ’19, one of five players in the original Sandglass play Babylon, Journeys of Refugees. Ching, who initiated the troupe’s visit to Bates, was one of the puppeteers performing the parent-child scene. “We’re animating these characters and breathing life into them — it’s very much a breath-based approach.” 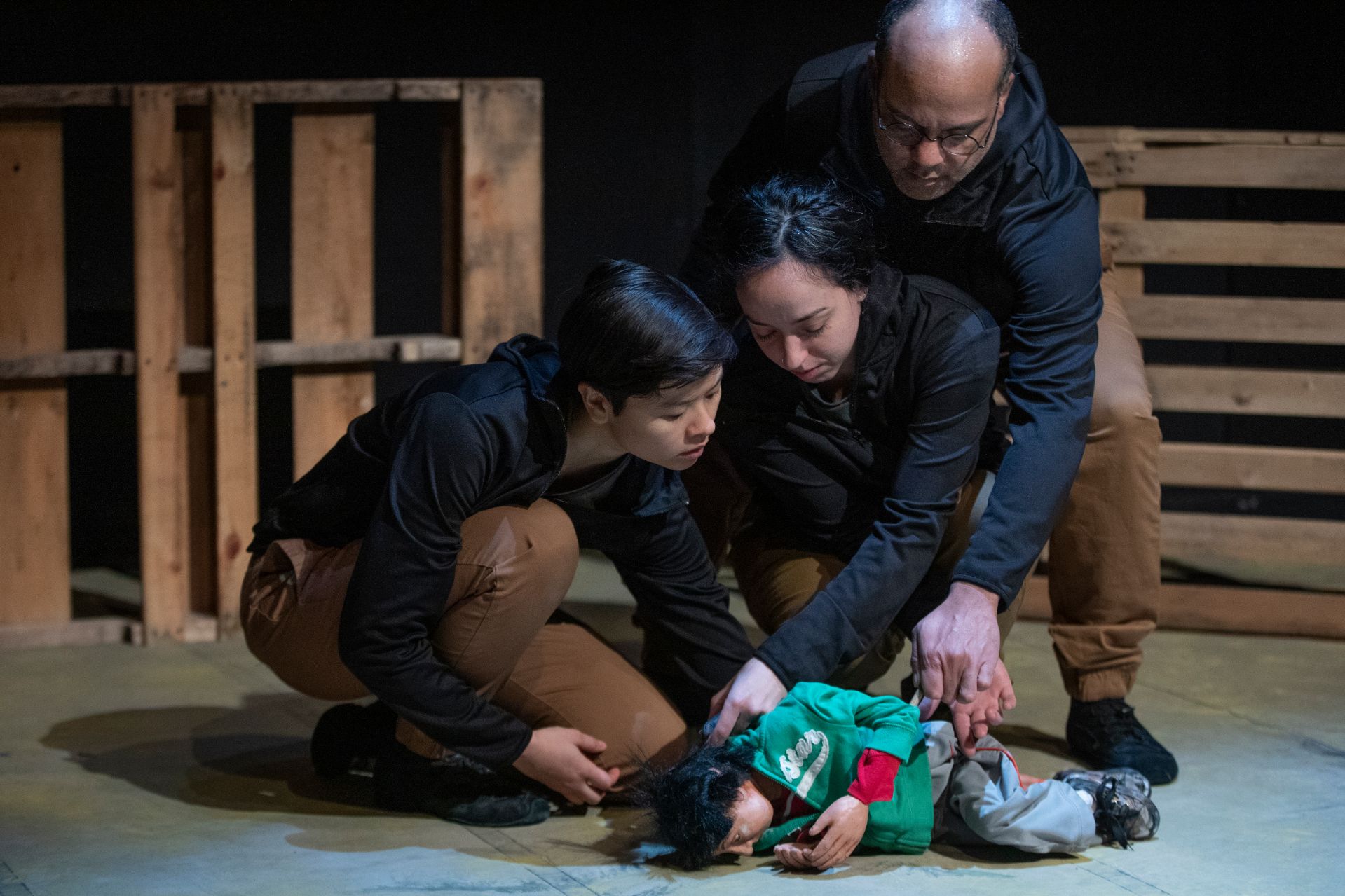 Based in Putney, Vt., Sandglass offers two performances Jan. 11 and 12 in Gannett Theater. Combining acting and singing with the puppetry, Babylon is an original work based on interviews with refugees from Syria, Afghanistan, El Salvador, and Burundi.

The piece explores the relationships between refugees, their homelands both lost and new, and the conflicts that arise in the communities — such as Lewiston — to which they flee.

The piece was developed collaboratively by members of the company, including Ching, who first encountered Sandglass through an intensive summer puppetry program in 2016.

“Kei’s been one of the core members of the ensemble for this production since we started work on it,” says Eric Bass, Sandglass co-artistic director and co-founder of the company with his wife, Ines Zeller Bass.

“Part of our work is how we actually have grown together over a couple of years to become an ensemble for this piece,” says Eric Bass. “That entails the practice of the art forms, a discussion of the issues, and a personal and a working relationship to each other. Kei has brought a great humanity and a wonderful perspective to that.”

Sandglass is distinctive, in part, because of its robust community orientation. In fact, the troupe’s weeklong Bates residency has included workshops with Lewiston High School students in a theatrical enrichment project. Justin Moriarty, technical director for Bates dance and theater, is leading the six-week course through the high school’s 21st Century Leaders afterschool program.

The community focus in Babylon, of course, is its sympathetic examination of the encounters between traumatized refugees and longtime residents feeling their own kind of dislocation as the refugees resettle in their towns. “We’re really asking, ‘How can we become more compassionate listeners and how can we spark dialogue about this extremely complex issue?” says Ching.

“So, while the show is about the journeys of refugees, it’s also very much reflective of the dialogue that’s going on with American people, especially in communities that have high refugee or asylum-seeker populations.” A dance major who has also been very active in Bates theater, Ching first performed Babylon in Portland last year and helped bring it to Bates this week.

As opposed to marionettes or hand puppets, whose manipulators are generally concealed from the audience, the Sandglass puppets are operated by performers on stage — often more than one performer to a doll. The puppets consist of heads, hands and arms, and costumes. 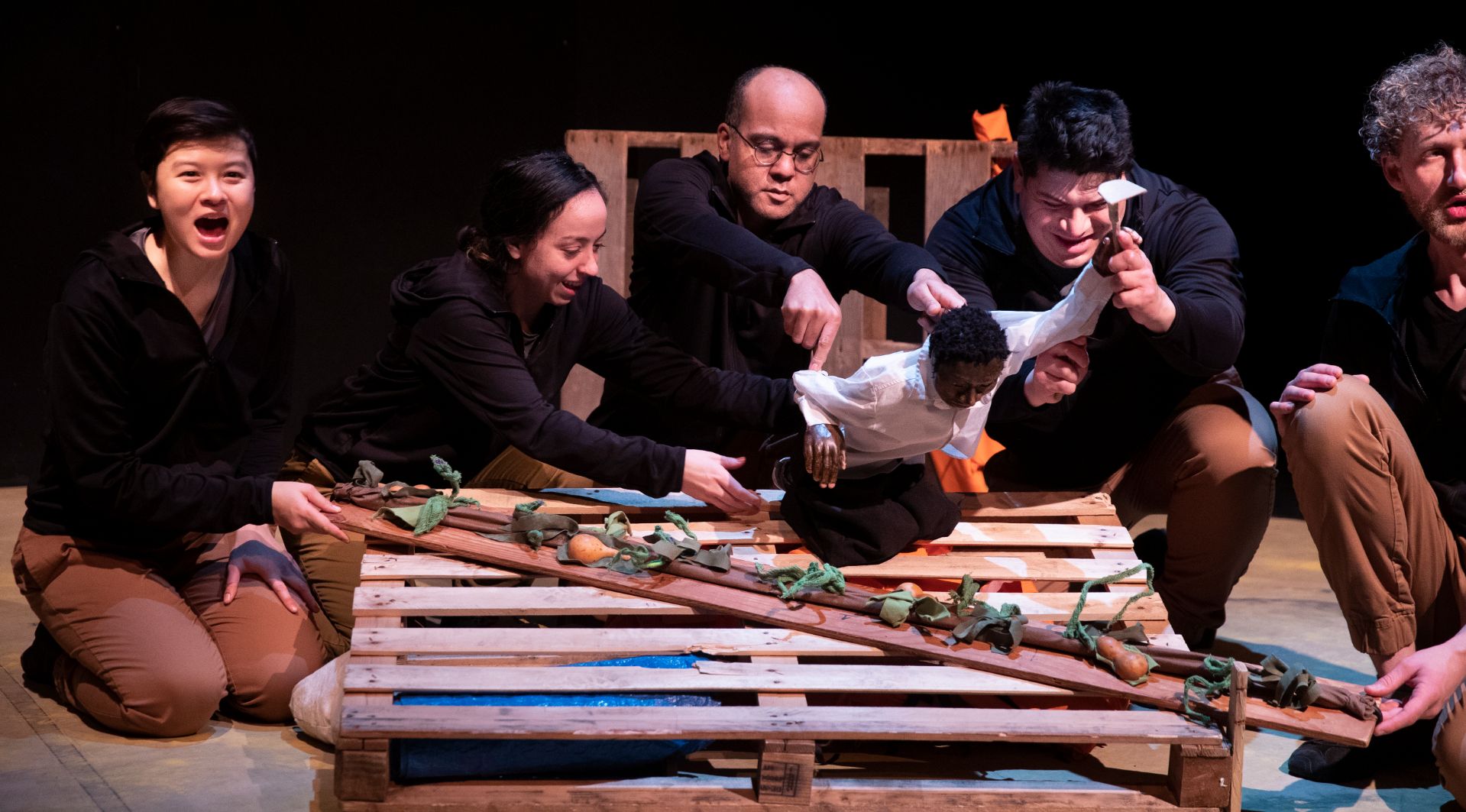 As convincing as the puppeteers’ expressive skill can be, the close proximity between puppet and puppeteer torques up, in a strange and compelling way, the emotional tension — whether the scene is tender or violent.

That’s one aspect of an approach to puppetry that sealed the deal with Sandglass for Ching. “I really fell in love with the kind of pedagogy that they were putting forth, and I thought, ‘Wow, I’d love to be in a company like this one day.’

“And then I heard that they were setting out to do a play about the refugee crisis, and I thought, ‘I’d love to make work like that one day.’ And sure enough, they had an opening, and I got the part.” Ching adds, “And once I got involved with this, pretty much right off the bat, I thought, ‘This piece needs to be in Lewiston.’”