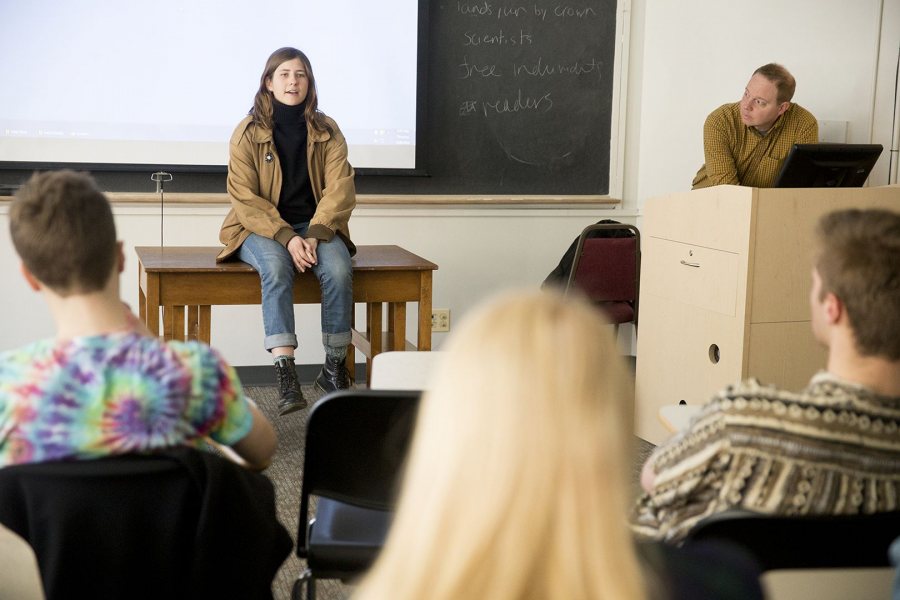 Nicole Danser ’15, a student at the USC School of Cinematic Arts who screened a film at the Emerge Film Festival, talks Thursday with students in “Film Festivals and Digital Video Production,” a Short Term course taught by Assistant Professor of Rhetoric Jonathan Cavallero (right). The class is part of a formidable Bates volunteer posse supporting the festival. (Phyllis Graber Jensen/Bates College)

The Emerge Film Festival here in Lewiston-Auburn kicked off Thursday and runs through Sunday, and this year Bates is one of the principal sponsors.

So what’s that mean?

Well, like much of Bates’ engagement with our community, the college’s sponsorship of this fast-growing festival is a two-way street lined with people and partnerships.

“Our film students will learn the business by seeing it in action.”

For example, Assistant Professor of Rhetoric Jonathan Cavallero sits on the Emerge board of directors, and he’s integrated his Short Term course, “Film Festivals and Digital Video Production,” into this year’s event.

“Our film students will learn the business by seeing it in action. That’s invaluable,” he says. Festival experience will also “help to remove barriers to their entry into the business” while letting them see “the variety that exists” in the film world. 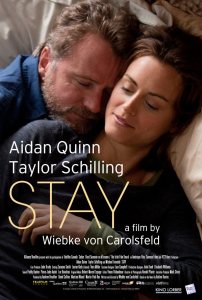 The students have gotten to see work by one of their own, too.

Another Bates connection at the festival is Wiebke von Carolsfeld, the lead instructor of “Filmmaking, The Creative Process,” one of the innovative, practitioner-taught courses offered during Short Term.

Besides working the festival, Cavallero’s students will break into four groups tasked with creating a documentary film that could help Emerge learn more about its identity and rapid growth.

One Bates group will explore the college’s growing connection to Emerge, “what it is, what it could be, what that could mean for students,” Cavallero says.

The three other groups will do educational outreach in local high schools; examine the interests and needs of Maine filmmakers vis-à-vis Emerge; and look at how the festival audiences react to and embrace the festival and its films.

Now in its third year, Emerge will screen 40 films selected from some 2,300 submissions from 42 U.S. states and more than 100 countries.

The festival’s other film venues are the college’s Olin Arts Center, the Community Little Theatre in Auburn, and the Franco Center’s Performance Hall and Heritage Hall in Lewiston.