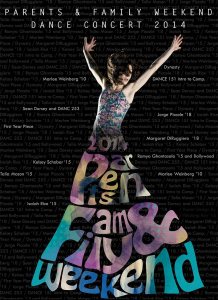 A great theater poster, says Bates theater director Kati Vecsey, “makes me want to rip it off the wall, frame it, and hang it in my house — but it should also make me want to see the show.”

From that perspective, posters created by Khi Kim ’16 of Goyang, South Korea, have fueled larcenous passions while helping to fill Bates venues over the last four years.

In 2012, Kim arrived at Bates to study biochemistry. He also had a graphic design background, and soon got a campus job designing posters for Bates theater and dance productions.

In the four years since then, Kim has created some of the best and best-liked posters that the campus has ever seen.

“His work is sophisticated, evocative, and clever,” says Tammy Caron, senior designer and Kim’s supervisor in the Communications Office.

A Creative Case Study: The poster for Wasteland 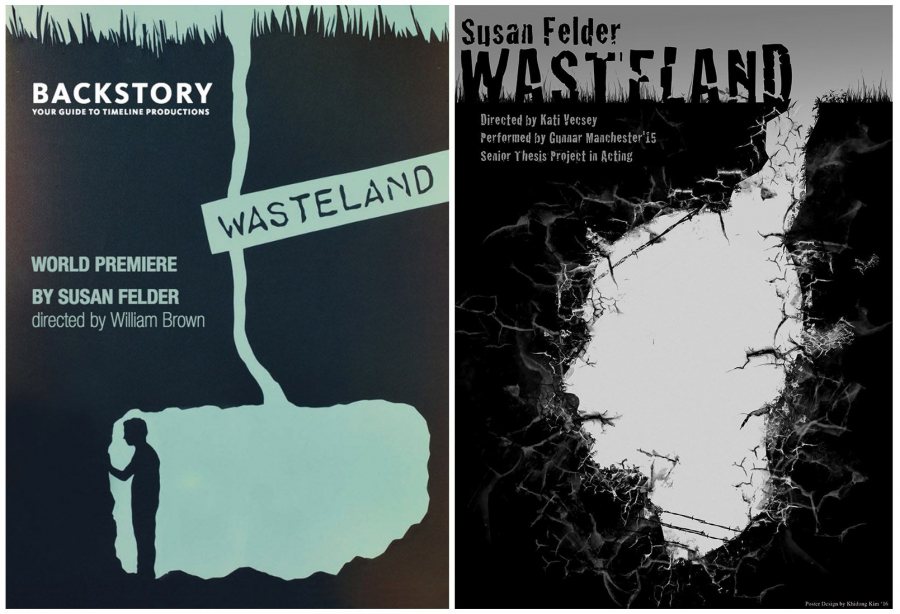 Here are two versions of a theater poster for Susan Felder’s play Wasteland. At left is one done by a Chicago-based theater company. At right is Khi Kim’s version for the Bates production in fall 2014.

Khi Kim’s poster for Wasteland does what a poster should, says Katalin Vecsey, senior lecturer in the theater program who directed the fall 2014 production of the Susan Felder play.

As with her other poster project with Kim, Vecsey first asked him to read the play. Then, he reviewed the set design with Vecsey while they talked about her directorial and artistic concept.

She also showed him a Wasteland poster, on left above, that she did not care for.

Vecsey says that she specifically asked for a poster that would not “reveal that there are really two people in the show, and that they communicate with each other over a wall. I wanted to keep it as a surprise for the audience.”

The result, Vecsey says, was one of his best Bates posters ever. “By the way, Susan Felder also loved it,” she adds.

Vecsey, a senior lecturer in theater, has gotten used to Kim’s posters “disappearing from campus even before a show opens — students take them for their rooms.”

And if Kim knows what students like, it’s because he works at it; he’s always in conversation with his campus and his fellow students. He calls it getting “inspiration from real life.” All day, he says, “I have conversations” with people around him, all the while thinking about design concepts.

“When I talk with someone, I think to myself, ‘What will this person want to see in the show and in this poster?’”But also, Kim is paying attention to what the poster should say about the show. Emotionally, the two should align, Kim says. “We want people to arrive as emotionally ready as possible.” 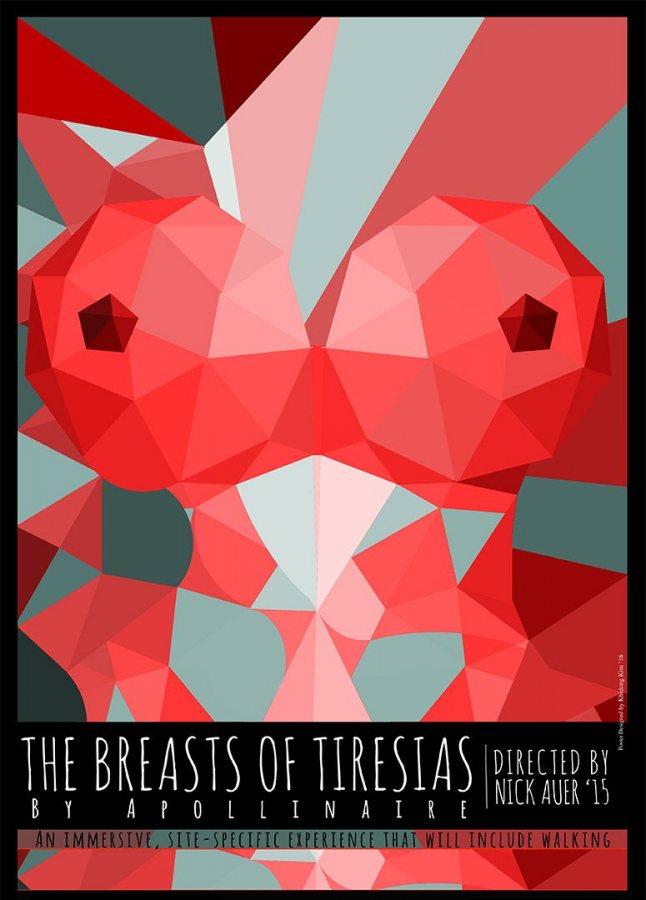 Born in Korea, Kim was educated in China before coming to Bates. Upon arrival, he decided to trim his dual interests in science and art down to just one. “I thought, ‘OK, now’s the time.’” Yet, four years later, “I’m still doing both,” he says, and it’s been a win-win.

For example, his senior thesis on RNA has drawn him into bioinformatics, a field that develops methods and tools to understand biological data. Bioinformatics puts a premium on visualizing information, and that’s exactly what Kim has been training to do while designing posters.

He says that his thinking has become “more visual, and that skill transfers well into science when I try to analyze a graph, imagine a structure in 3D, or use geometric shapes and patterns.”

He does it with an “intuitive understanding of the concept-to-execution process,” says Caron.

Kim, known for his indefatigable charm, might hear from several Bates artists involved in publicizing a performance. It’s a rigorous process; Professor of Dance Carol Dilley loves Kim’s work but admits that her team “might reject one out of every three” of his initial concepts for a dance concert poster.

Each time, Dilley says, Kim comes back with either a revision that accurately reflects the client’s feedback or with a completely new concept, whichever was requested. 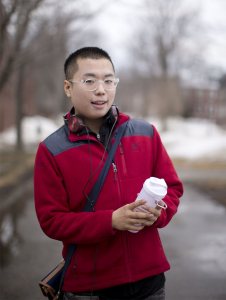 Kim thought he’d have to trim his dual interests, in science and art, down to just one at Bates. Yet he found that he could pursue both. (Phyllis Graber Jensen/Bates Colleg)

He does it with an “intuitive understanding of the concept-to-execution process,” says Caron. With deftness beyond his years, Kim “keeps the client’s needs in mind while offering his own creative interpretation of their ideas.”

It helps that Kim has command of a robust set of skills, from manipulating images, layers, and type to using line, composition, and scale play. He plays with various design elements to create both complex designs — such as the poster for They Fly Through the Air With the Greatest of Ease — and, says Caron, “incredibly powerful, yet simple statements,” such as the Boxing 2000 poster.

Early on, Kim says, he took rejection personally. (Really, who wouldn’t, or doesn’t?) “I had a hard time processing it, thinking, ‘Oh my god. What did I do wrong?’ I felt embarrassed.”

His strategy now is to look at rejection as a difference of understanding, or perhaps just a failure to communicate. “People think differently,” he says. “There can be errors in communicating. Sometimes people just want different things. Rather than taking it personally, I see it as just differences.”

Indeed, Dilley says, “Khi has figured out, very young and very well, how to invest in the work but not invest in his attachment to the work.”

Today, Kim doesn’t see the need to choose art over science, or vice versa. Adds Caron, “I don’t think he’ll ever need to.”

He plans to work in Korea for a few years, then perhaps return to the U.S. for graduate work in informatics, “where science and data visualization and arts all come together.”

This story appeared in the the Spring 2016 issue of Bates Magazine.

Bates at Night: ‘In the moment’ with the Jazz Band