For the third year running, students and faculty in two distinctive types of Short Term courses showed their stuff at an end-of-term showcase.

The former, often taught by accomplished Bates alumni, expose students to practical and applied areas of study typically not available within the curriculum. The latter courses give faculty time and resources (in the form of student partners) either to create a new academic course or rework an existing one.

Here’s a look at a few instances from this year’s showcase, held May 25. 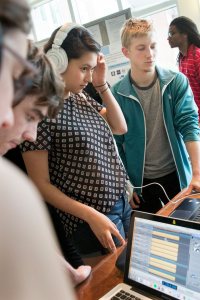 Listening to mixes by students in a music recording and production course taught by Jonathan Wyman ’97. (Phyllis Graber Jensen/Bates College)

A list of learning objectives that starts with “signal flow analysis” might stop some people, but 16 Bates students nevertheless gravitated straight to “Music Production, Recording, and Mixing.”

A practitioner-taught course in its second year at Bates, the course was again led by Jonathan Wyman ’97, one of Maine’s most highly regarded producers and engineers.

The class this year attracted students with widely varying experience that included, in one case, some time in a Nashville studio.

The more experienced students, Wyman noted, helped keep discussions engaging: “When a question came up, I’d be able to volley it back to the class rather than talk at the students.”

“I threw them in the deep end” mixing-wise, Wyman said. “I had one big standing rule: You can omit anything, you can mute anything, but not add anything — not your own back-up vocals, not tambourine or drum loops.”

And students who wanted to do otherwise got a valuable insight into creative dynamics between recording engineers and musicians.

At the showcase, Wyman and his students set out a battery of laptops and headphones with which visitors could hear, within the course of a single song, the students’ different approaches to the complex art of mixing a sound recording.

In this excerpt from the song “Every October,” written by Chris Ross and recorded for the course by Ross and his band the North, you can hear the mixes change at approximately 10, 30, and 50 seconds — the changes are most apparent in the drum sounds.

Yutong Li ’18 of Shanghai, China, signed up for the Short Term practicum “Consulting for Strategy Development” figuring it would be a five-week foray into conceptual thinking.

“But it was a whole different experience,” she says. 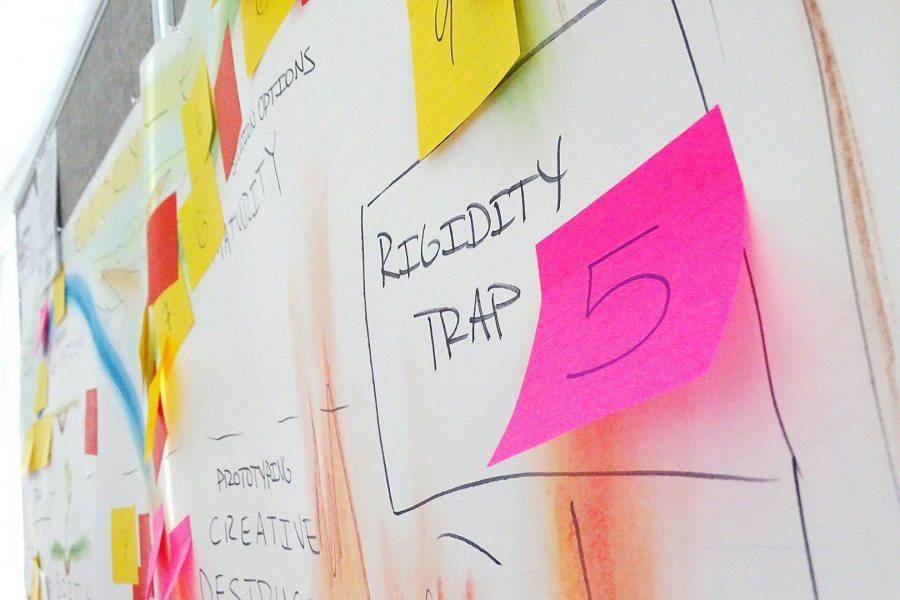 Taught by Fisher Qua ’06, the class worked with Student Affairs on a hands-on exercise about student health.

They used a set of methods, called Liberating Structures, looking to “build a foundation for a peer-to-peer health and wellness model for diverse populations,” says Erin Foster-Zsiga, associate dean of students for residence life and health education.

“You have to ask questions and listen. You can’t assume anything.”

From that experience, Li learned that working with groups and organizations to create strategies demands very basic, yet finely tuned, human skills. 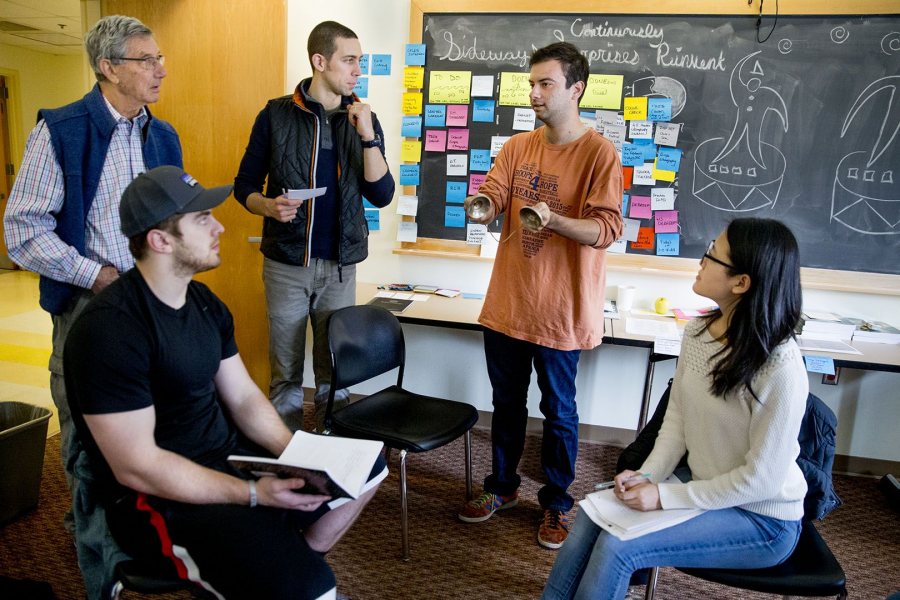 “You have to talk to people. You have to ask questions and listen. You can’t assume anything,” Li said about the groundwork that her class did. “You bring as many people as you can into the discussion because the strategy will affect everyone.”

When an organization works on strategy, breaking down hierarchy is key to achieving buy-in. “It’s something we often state as a value but rarely have the tools to do so effectively,” says Qua.

Li says that a big takeaway from the class was learning various. practical ways to achieve this goal of “bringing equal weight to everyone’s voice.”

A trio of chemistry majors teamed up with Associate Professor of Chemistry Matt Côté to shake up the gateway intro course, Chemistry 107, “Atomic and Molecular Structure.” 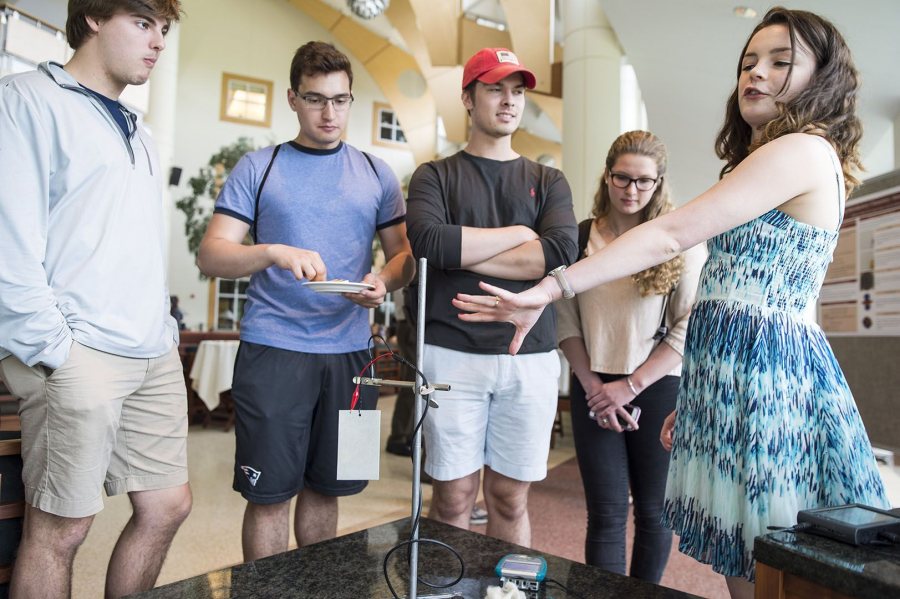 Kasey Wood ’18 of Hastings-on-Hudson, N.Y., explains wave behavior of a vibrating string during a showcase of Short Term projects in Perry Atrium on May 25, 2016. (Josh Kuckens/Bates College)

The challenge: “Students come to any college with conceptions and misconceptions about chemistry,” says Sarah Tobin ’17 of Medfield, Mass., a member of the redesign team.

Once a student develops a misconception, the brain won’t let go, she says. “You can give students accurate information” to try to banish the misconception, “but then if you ask a higher-level question, or allow time to go by, they will revert to the wrong concept.”

While lectures can work, Côté explains, “recent research makes it clear that engaging students more actively in the classroom is often much more effective.” In fact, so-called active learning helps “level the playing field for students who may lack strong preparation for a science course.”

For example, Côté and his team, which also featured Kacey Wood ’18 of Hastings-on-Hudson, N.Y., and Amelia Wilhelm ’18 of Charlotte, N.C., know from experience that atomic orbitals (stable patterns of electron density around a nucleus) are confusing, as is the fact that electrons display wave-like behavior.

So they created a variety of demonstrations, including ones that show various wave properties.

By seeing an accurate, accessible demonstration, a student will then have “reliable intuition” when learning about what they can’t see: atomic orbitals.

“We purposely begin with one-dimensional systems — the vibrating string — then move up to two dimensions,” Côté says. The real thing, atomic and molecular orbitals, “are the extension into three dimensions.”

Take the wave term “node.” You have know what a node is in order to under stand atomic orbitals,” explains Tobin. “But it’s a word that students can repeat without every really understanding what it is or what it means.”

The visual representations, Tobin and the team hope, will “really drive home the idea that ‘this is the way it is.’ They can see, touch it, and know it exists.”

By next winter, global health will be much-improved, predicts Megumi Milla ’16, a sociology major from Roslindale, Mass.

In this instance, “global health” is a course, Sociology 235, one that uses sociological methods and theories to explore health and illness around the globe. 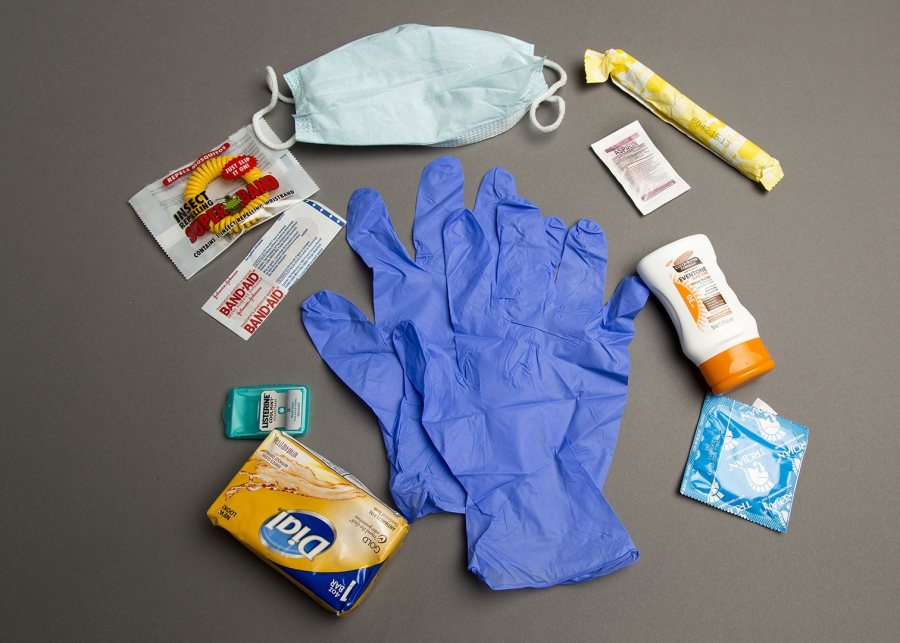 After teaching the course eight times over 13 years (including twice in South Korea), Associate Professor of Sociology Heidi Taylor figured it was time for a makeover, so she and her team of six students changed everything from readings to the course’s basic approach.

“The course used to be organized by country,” explains Milla, so a review of health care in China might look at air pollution, among other topics.

When offered next winter, the course “will be organized by topic,” Milla says, so air pollution would be a topic without borders. “And that will help students make more connections.”

The comparative approach, says Taylor, will be a boon to students by highlighting “how social, cultural, economic, and historical factors shape a nation’s response to health crises.”

The new format will also give students a stronger context for understanding certain non-Western health practices that are prone to snap judgement, such as female infanticide or genital cutting.

“We all are so quick to judge the practices of other cultures,” Taylor says. As researchers, “before we can blame a person or a culture for a health crisis, we must take the time to observe.”

Short Term Practicum: “Journalism in an Age of Media Explosion”

The last course that Ben Palmer ’16 took as a Bates student was “Journalism in an Age of Media Explosion,” the Short Term practicum on journalism taught by Peter Moore ’78, a veteran editor of Men’s Health magazine. 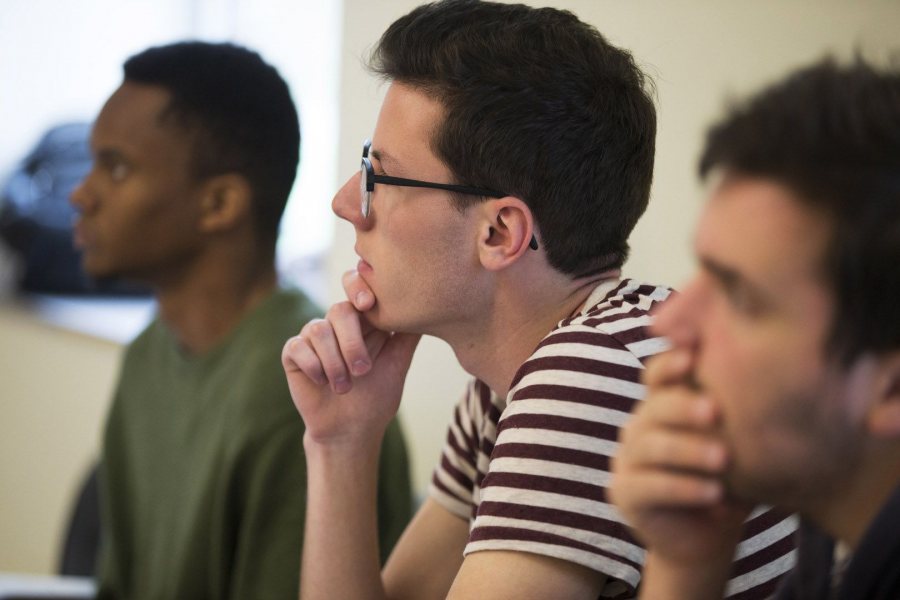 Ben Palmer ’16 of Minneapolis (center) listens during a class session of “Journalism in an Age of Media Explosion.” (Phyllis Graber Jensen/Bates College)

Hearing Palmer talk, you’d think the course was an exit exam for the liberal arts:

This was very new: the idea of finding stories and going out and investigating them. In a way, we all do it anyway. We see something that makes us think, and we try to puzzle through why that is. But formalizing it in a craft was very interesting and very new to me.

When you see something that makes you think, “Wait…what?” you don’t just let that slide. You go out there and figure out what it is, what that thing was that made you take a pause. And it’s usually worth a second thought, an investigation, to go deeper.

Boats made at Bates, all the way from Japan