The midcoast Maine town of Damariscotta, a popular destination for both tourists and retirees looking to resettle, was also a field-trip destination for a new Short Term course this year.

The downtown is a little gem whose charms include quirky-but-useful amenities and architecture dating back to the 1840s. Water views abound, as the densely built-up downtown is bordered on three sides by the Damariscotta River.

An especially striking view is from a parking lot sandwiched between the river and the downtown. Just steps from the main street, this spacious riverfront lot has been an essential asset to the town for more than 50 years.

Students, faculty, and guests of the course “In Search of Higher Ground” pose with the Damariscotta River in the background on May 1, 2019. (Theophil Syslo/Bates College)

The Damariscotta is a tidal river. As climate change drives up sea levels, high tides are getting higher. And when the river rises enough to flood downtown, it will come right across that parking lot.

So if you’re going to discuss a town’s response to sea level rise, what better place to do it than the local ground zero? That’s why, for their Short Term course “In Search of Higher Ground: Sea Level Rise, Flooding, and the Future of the Eastern Seaboard,” Bates professors Lynne Lewis and Francis Eanes got their students together with local officials at the parking lot to discuss the town’s flood-response strategy.

Damariscotta, whose parking lot is already subject to flooding during extremes of tide and weather, was one of a few Maine destinations for the class. (The local authorities, by the way, plan to raise the lot by three feet and edge it with a new seawall. A second seawall will protect the north side of downtown. The total cost would have run about $1.8 million according to a estimate from 2015, when construction was considerably cheaper.)

Following the local excursions, the centerpiece of the course was a 10-day trip to the coasts of Virginia and North Carolina, where the battle with high water is much further along. The class visited research centers, took tours on land and sea, and met with experts in diverse disciplines. They learned the dichotomy between “green” adaptations to rising water that mimic and support natural systems, and “gray” adaptations like seawalls and bulkheads. 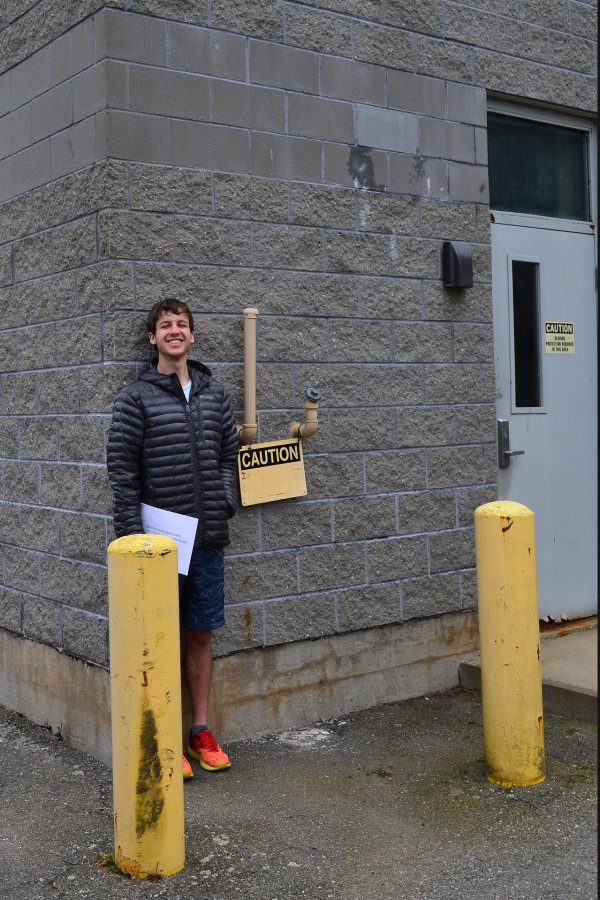 A member of the “In Search of Higher Ground” class, Henry Colt ’19 poses at the wastewater treatment plant by the sea in Boothbay Harbor, Maine. Six feet tall, Colt marks the level sea water could reach during a northeaster in the year 2060 according to one scenario. (Lynne Lewis for Bates College)

The class saw the double-deck piers that the U.S. Navy is building at its base in Norfolk, Va., a city especially hard-hit by rising seas. And they visited Nags Head, a town on North Carolina’s Outer Banks, where authorities are spending $43 million to “renourish” the beloved-but-eroding beach with a layer of sand, four and a half feet thick, pumped in from the sea floor a mile or more off the coast.

Focusing on economic and social vulnerabilities to sea level rise, “In Search of Higher Ground” was explicitly an experiential course, designed to put the students where the action is and then inform their responses to it.

Though coastal flooding is just one subset of the problems caused by climate change, its ramifications are mind-numbingly complex — including the loss of critical wildlife habitat, the loss of homes, businesses, and public infrastructure, and the monetary and social costs of relocating communities. 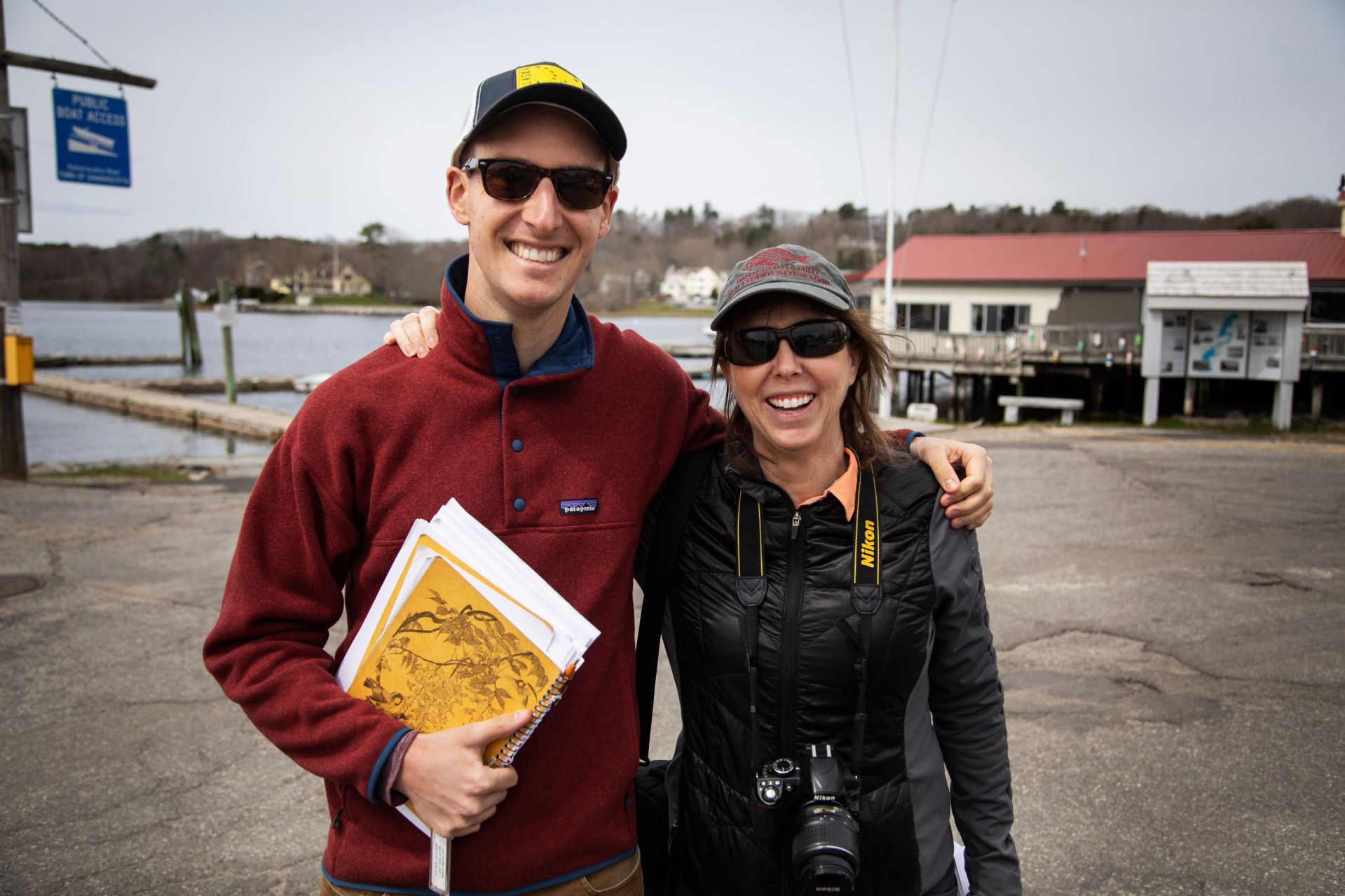 Francis Eanes and Lynne Lewis pose in Damariscotta, Maine, during the May 1 visit by their “In Search of Higher Ground” class. Eanes is a visiting assistant professor of environmental studies and Lewis is the Elmer W. Campbell Professor of Economics at Bates. (Theophil Syslo/Bates College)

So maybe the best thing you can say about sea level rise is that it’s an educational cornucopia. The road trips included visits with environmental economists, engineers, biologists, oceanographers, physicists, government officials, and more. With each new conversation, “I would see different students light up like, ‘Oh, like that’s what I’m really interested in,’” says Eanes, himself a visiting assistant professor of environmental studies who studies urban issues and food systems.

“The experiential piece is the springboard to taking a deeper dive into the more technical stuff,” he explains. “The topic is interesting to everybody, but different people will gravitate toward different methods” for coming to grips with it. The class, Eanes notes, was mostly underclass students, and more than half of the group were ES majors.

The trips were as educational for the two Bates professors as for their dozen students. “We could help students process and answer some questions, but most of the time I didn’t know the answer,” says Lewis, herself an environmental economist and the Elmer W. Campbell Professor of Economics. “We were learning right along with them.”

Inevitably, some members of the class approached the field trip ready to offer ideas. But that changed as they encountered the facts and the people on the scene. One student told Lewis, “I went in with my preconceived ‘You need to do this and that.’ And I realized that that’s not right.” 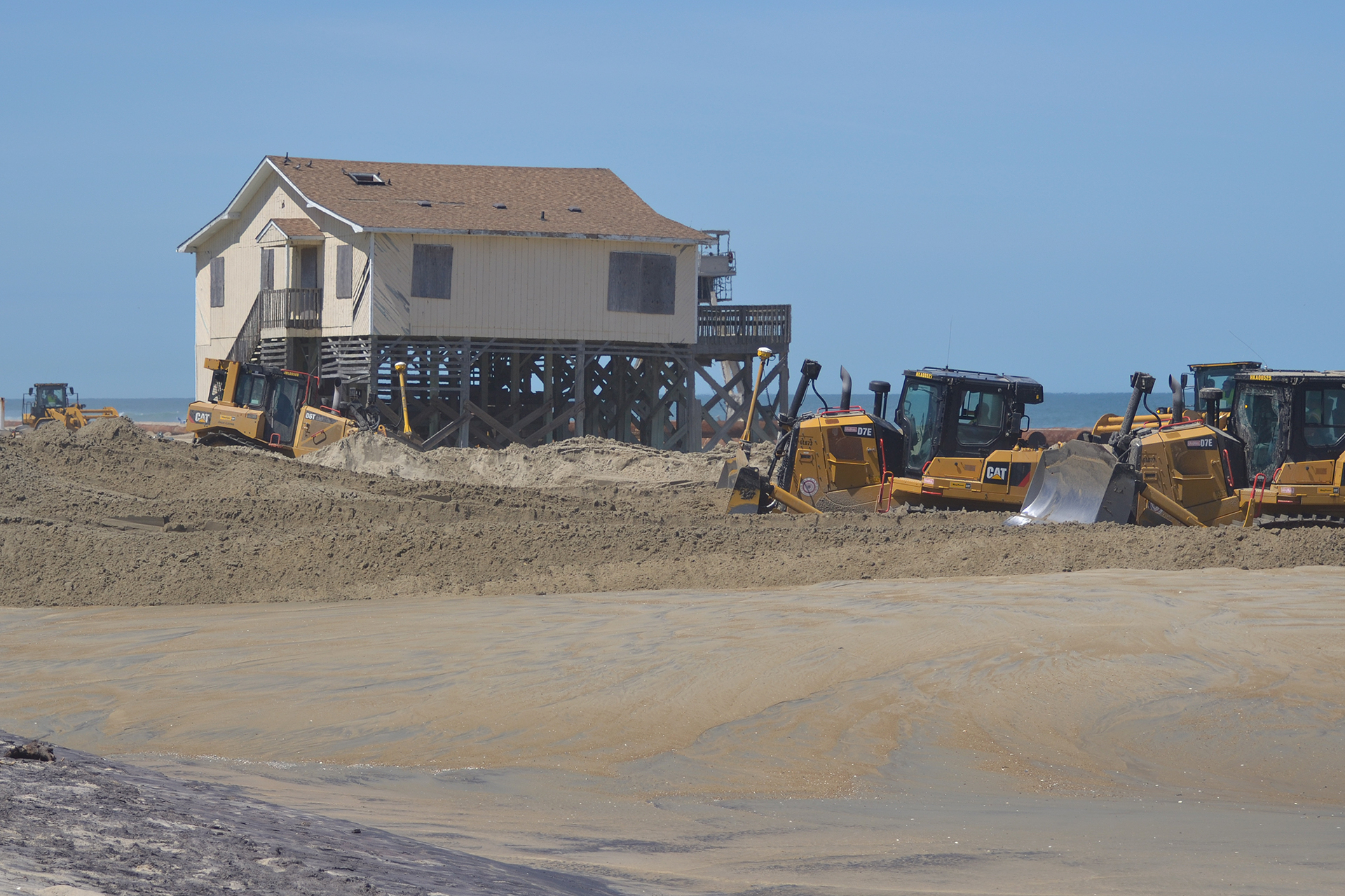 Bulldozers spread sand near a beach house at Nags Head, N.C., part of a $43 million beach “renourishment” project. Sand is dredged from the ocean floor and pumped more than a mile from an offshore “borrow” site to the beach. (Lynne Lewis for Bates College)

“You can watch the PowerPoint and think you understand,” says Koharu Aoki, a first-year student from Tokyo. “And then you get to see the real thing and it is totally different.”

Still, the impulse to march in brandishing advice is understandable when you consider the political, social, and cultural gridlock that humanity has imposed on this self-inflicted crisis. “We can’t fight each other and the rising ocean” too, says Kassie Wilson ’21 of Westford, Mass., a newly declared environmental studies major who took the course.

The Bates group heard from several sources that in negotiating response strategies with certain stakeholders, they often had to avoid the words “climate change” in favor of less politically polarized language, such as “recurrent flooding.”

“Not being able to discuss [climate change] at the state level has been very difficult,” Faunce said. “The next dollar I get from the state [for adaptation] will be the first dollar I’ve gotten from them.” (Funding for the Damariscotta project has come from federal and private sources.) 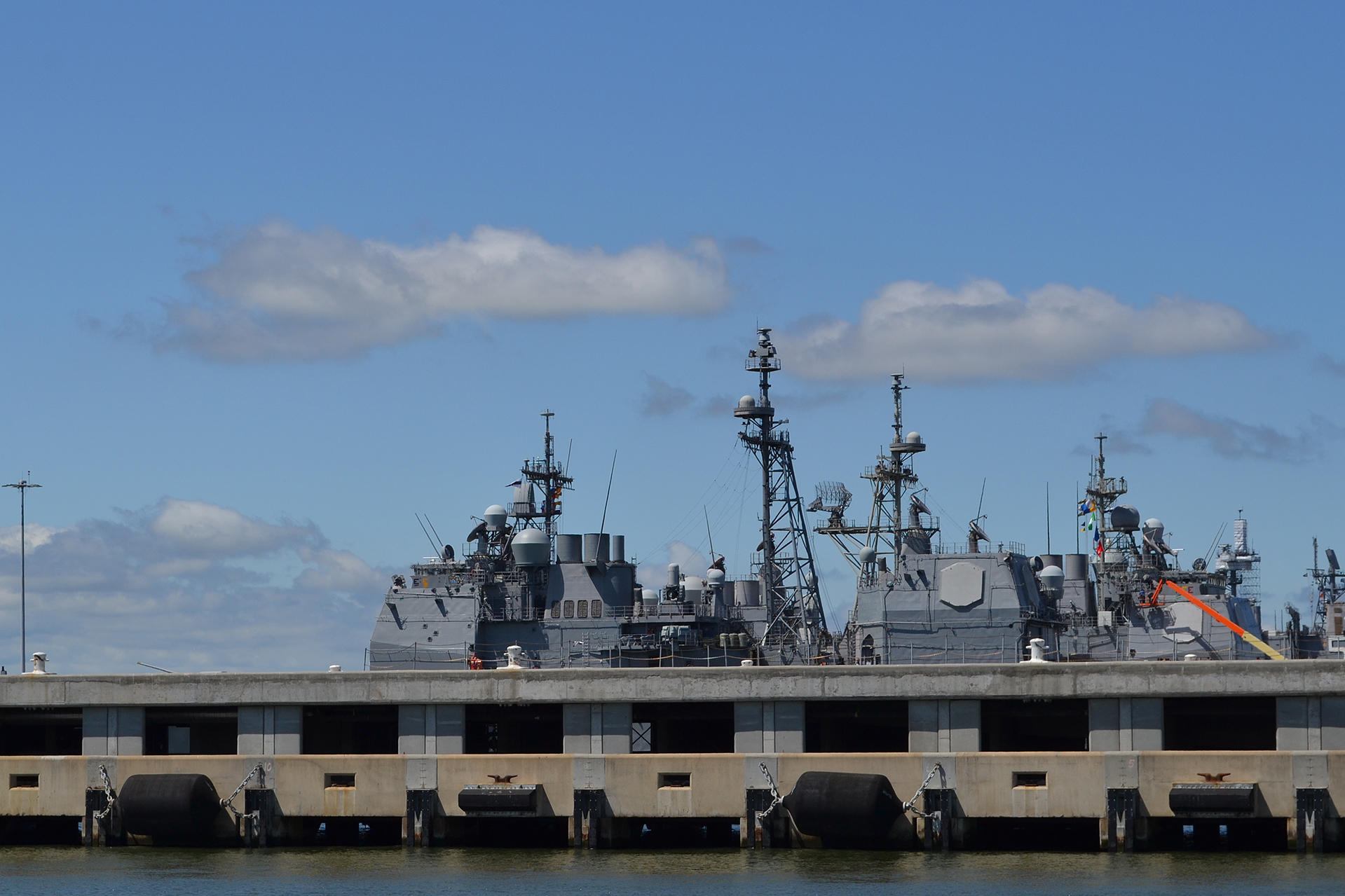 The Navy has added a second deck to some piers at Naval Base Norfolk to accommodate higher water levels and expedite the handling of cargo. (Lynne Lewis for Bates College)

Still, the field trips afforded examples of ingenuity and realism that gave the visitors from Bates some cause for optimism. Norfolk, facing one of the fastest rates of sea level rise in the nation, displayed a matter-of-fact effectiveness that was particularly admirable.

Deputy Resilience Officer Kyle Spencer told the class about the system of sensors around the city that, through the street navigation app Waze, show drivers which streets are flooded and impassable.

“He makes things happen,” says Lewis — “basically saying, ‘Well, here’s what I need. Nobody’s giving it to me, so I’m going to figure out how to do it, and I’m bringing people together to talk about it.’ It was pretty impressive.”

Norfolk also exemplified a principle common to many of the most effective approaches to the problem. “There’s this paradigm shift of, ‘We’re going to live with water, not try to keep the water away,’” says Eanes. “Trying to wall ourselves off from the water is not actually the most effective strategy, from a geophysical standpoint or from a psychological community standpoint.” 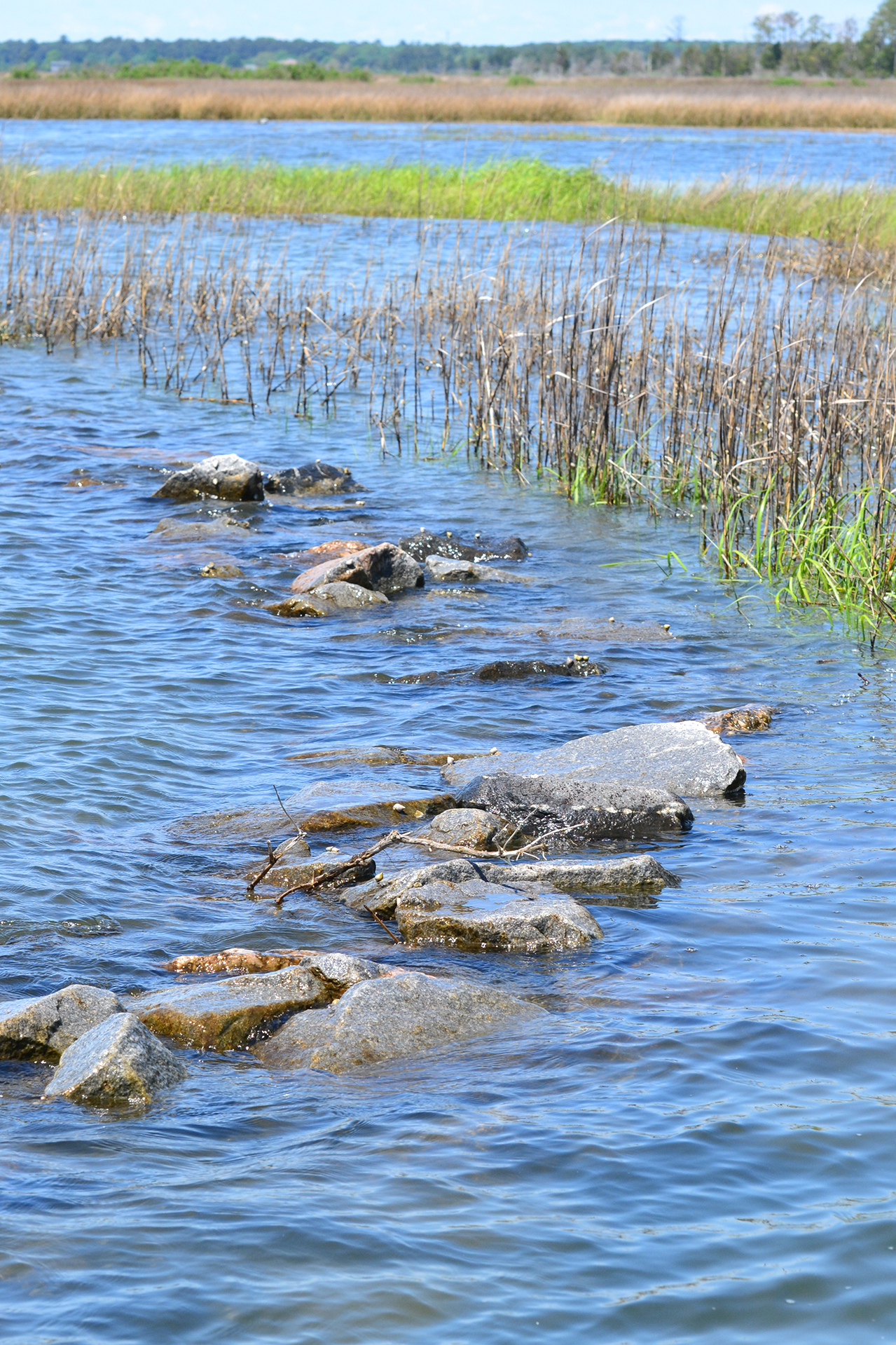 Instead, there’s increasing emphasis on infrastructure like flood parks, recreation areas that can also be used to contain floodwaters; and “living shorelines,” features like artificial reefs, wetlands, and dunes. These are “human constructions, and often will involve some sort of gray or hard infrastructure,” says Eanes. “But they’re using natural processes to absorb some of the increasing intensity of storm events.”

The measures that people like Spencer are “doing and thinking about are very creative,” Lewis says. “People are very aware that these might be Band-Aids, temporary solutions, but it’s what we’ve got right now.”

Offering some generational context, Eanes points out that the daily news hasn’t given college-age students much reason to expect creative solutions to large-scale problems, especially involving climate change. “The baseline that they are working from is that institutions and approaches that we’ve had for decades are not commensurate with the scale of the problem,” he suggests.

“People are very aware that these might be Band-Aids, but it’s what we’ve got right now.”

“And then to see that, ‘Oh, actually communities all over the place are working on this’ is a relief,” he says, even if the focus is on accommodating high water in the short term, and not mitigating climate change in the long term.

People leading the response to water that threatens their communities are “making decisions in political, social, and economic situations that we can’t know just from being at Bates and learning about it,” Dianna Georges ’22 of Clifton, N.J., said during a class meeting after the trip.

“Some people the class encountered are used to living with water, while for others it’s a new experience,” Lewis points out. “Adaptation is very localized and very context- and geography-specific.”

She adds, “No one is really talking about managed retreat. At least not yet.” 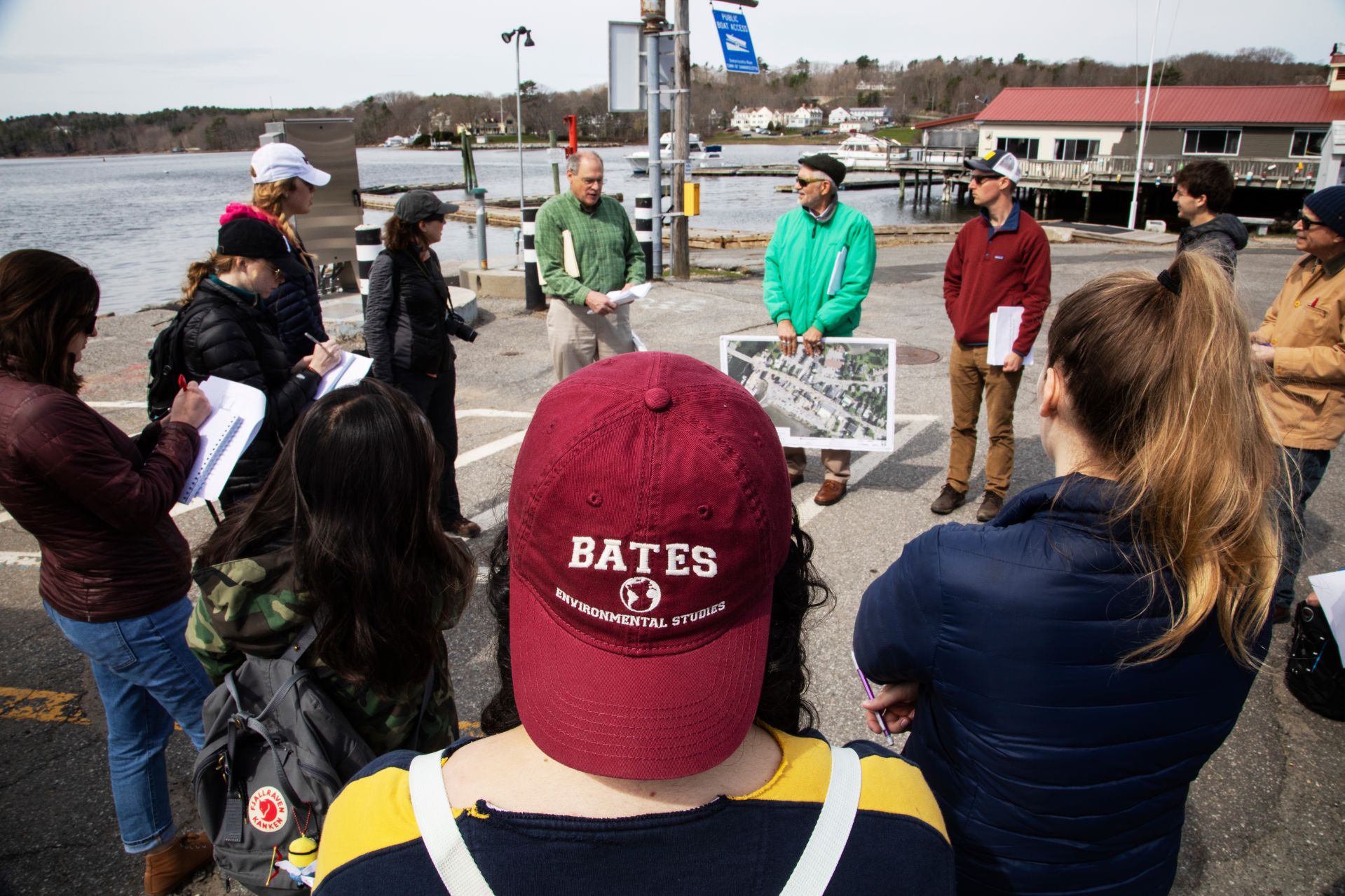