Announced as inductees in April, nine baseball legends including Thom Freeman ’63 joined the Maine Baseball Hall of Fame during ceremonies in Portland on July 17. 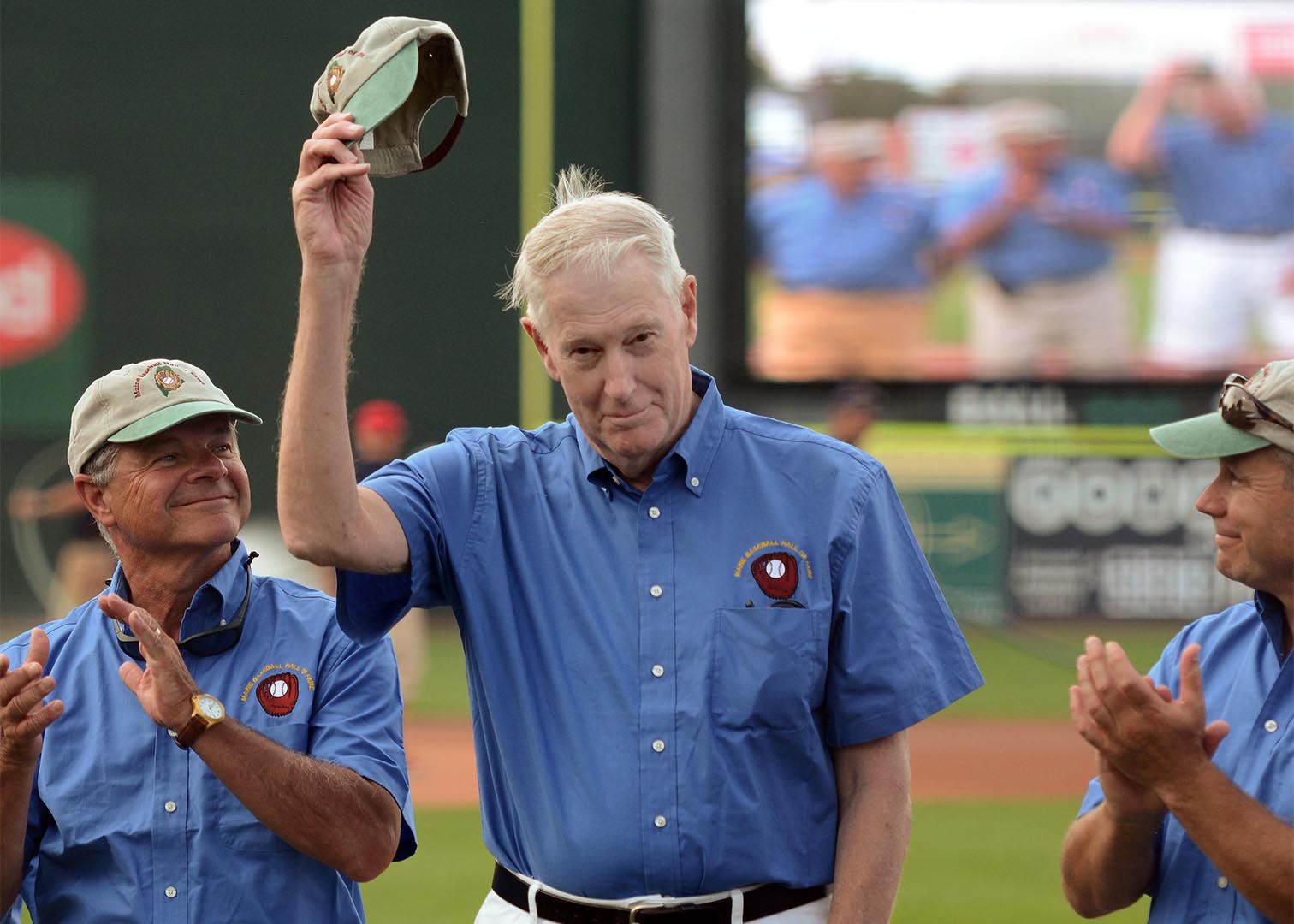 Thom Freeman ’63 tips his hat as he and fellow Maine Baseball Hall of Fame inductees are honored prior to a Sea Dogs minor league game at Hadlock Field in Portland. At left is Dan Deshaies, a great Maine umpire, and at right is Dave Gonyar, who played on UMaine teams that went to the College World Series. (Photograph by John Lanza ’67)

Freeman, Bates’ six-foot-six ace right-hander of the early 1960s, led the Bobcats to Maine State Series titles in 1962 and 1963 and to the 1962 NCAA tournament. He later pitched in the New York Yankees organization.

In 1962, Bates was the New England selection to the Eastern NCAA Small College Tournament, held in Teaneck, N.J. In Bates’ first game, Freeman held Fairleigh Dickinson to just a run in the Bobcats’ 2-1 win. Bates fell to Rollins College in the title game. 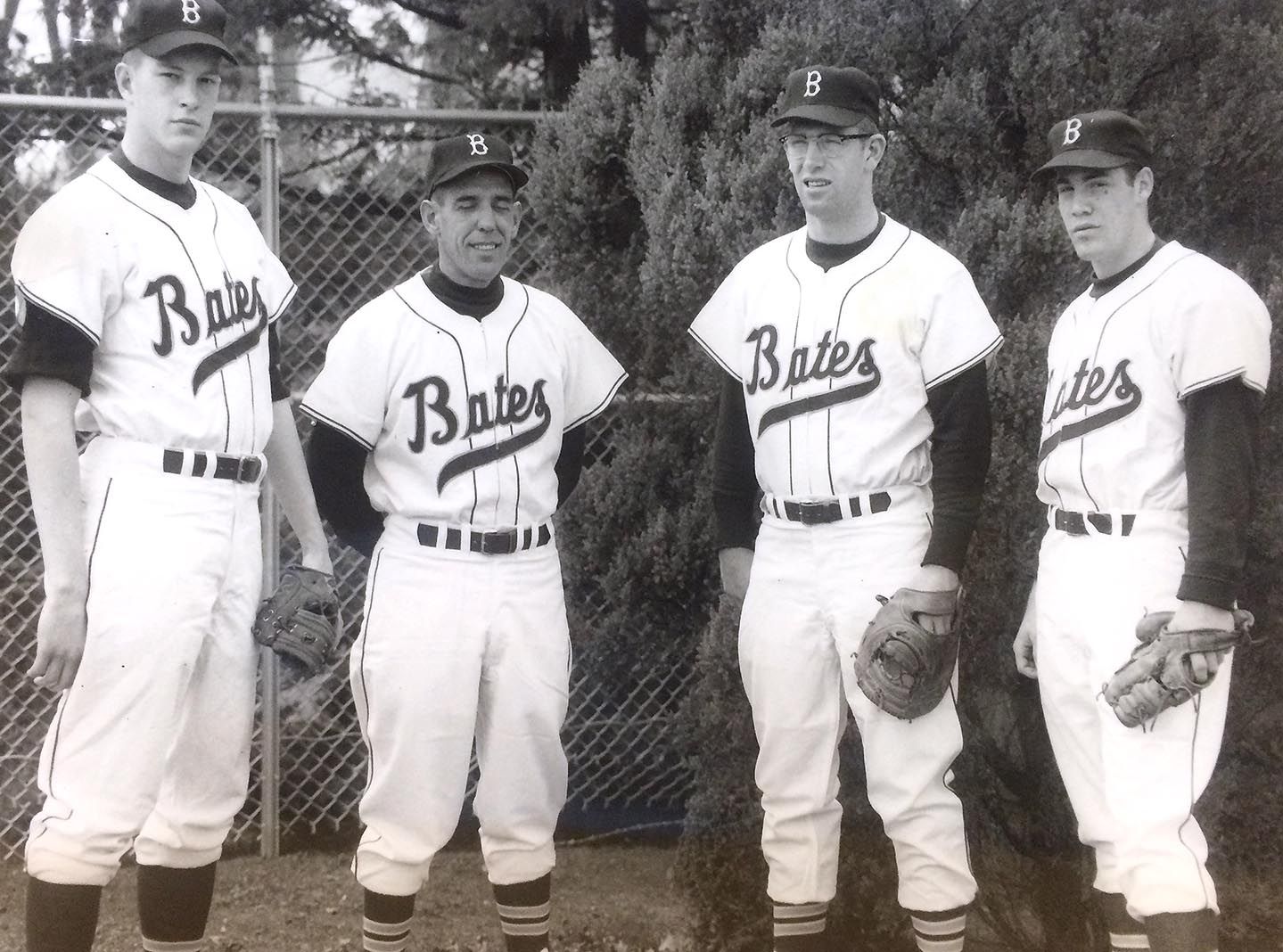 In his remarks at the induction ceremony, Freeman thanked a “special lady” in attendance: Ruth Leahey, widow of “our beloved Bates coach,” Chick Leahey ’52, who died in March at age 90.

Freeman talked about his various love affairs that bloomed when he came to Bates, with the state, the people, the college, the city of Lewiston, and a “beautiful young lady from Lewiston named Claire,” his future wife. They’ve been married 52 years.

Not on the love list was “spring” baseball in Maine. “Not so much” of a love affair, he admitted. “We were snowed out one year on May 14. Our southern trip was Boston. And all our state games were north of us.”

A large Bobcat contingent attended the ceremony, and, in fine Bates fashion, Freeman ended his remarks with “Yes, it is a great day to be a Bobcat!”

However briefly in the mid-1960s, writes Bob Keyes in the Maine Sunday Telegram, musician Bob Dylan and painter Robert Indiana “shared a zenith,” Dylan propelled by “Like a Rolling Stone” and Indiana by his painting LOVE. 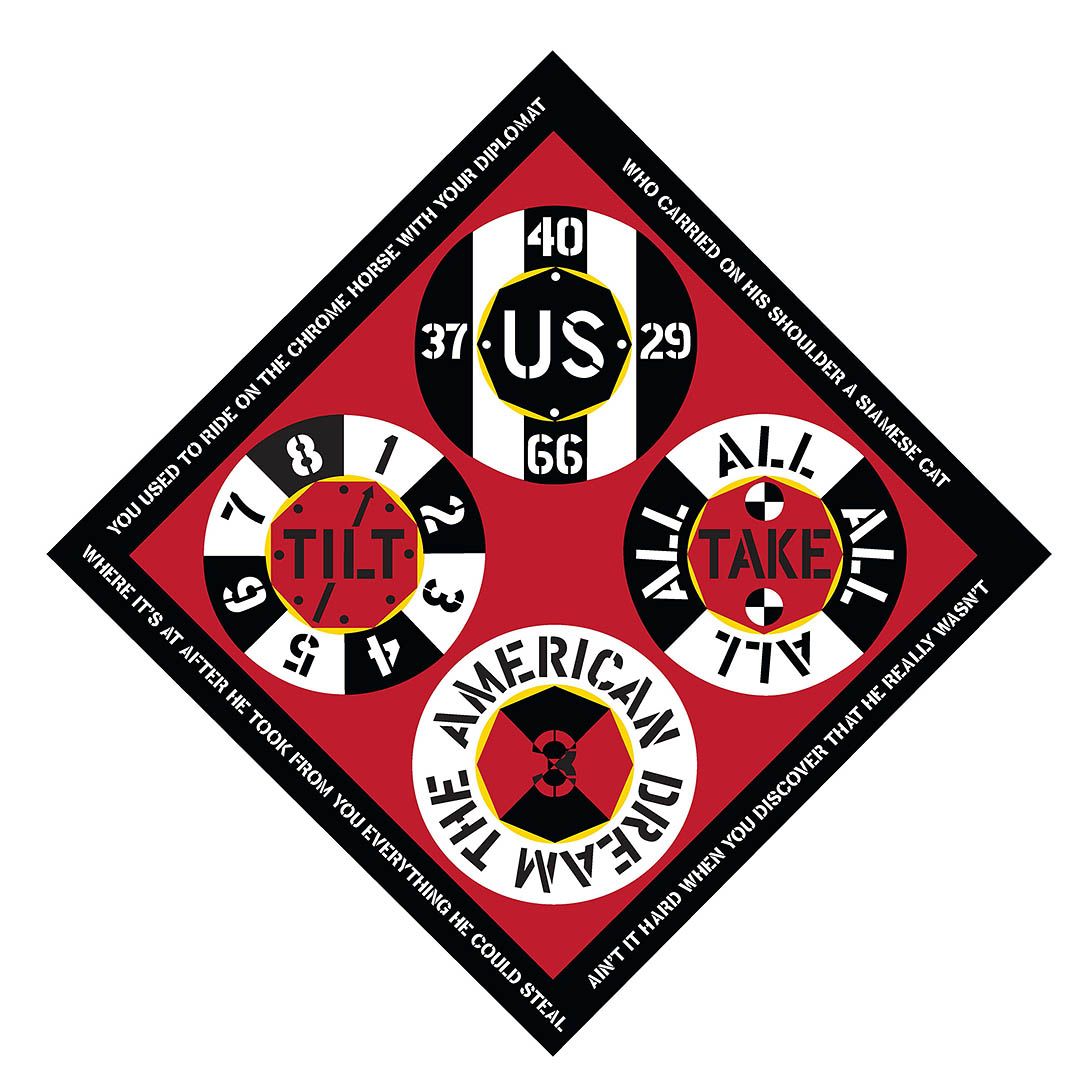 “Tilt,” silkscreen on triple-primed canvas from the “Like a Rolling Stone” series by Robert Indiana.

“Their worlds didn’t directly intersect, but both made furious work on the streets of New York that has lasted a half-century,” Keyes writes in his review of Robert Indiana: Now and Then at the Bates College Museum of Art.

The exhibition features the premiere of Indiana’s Like a Rolling Stone, a series that renders lyrics from Dylan’s groundbreaking hit in Indiana’s unmistakable style, thus merging the sensibilities of two of the 1960s’ definitive pop-culture figures.

Driving from New Hampshire to Bates for Reunion in June, classmates Breck Taber ’96 and Dan McGee ’96 talked about their other alma mater, Lebanon High School, where the girls soccer coaching job was vacant.

“It’s a long car ride, and (McGee) kept saying, ‘Breck, you have to apply for that job,’” Taber told Valley News reporter Jared Pendak. “Eventually, I realized he was right, that it would be something I’d regret if I didn’t do.”

Taber, who co-owns the Omer & Bob’s sports store in Lebanon, applied for the job, got it, and takes over as the Raiders’ head coach this fall. 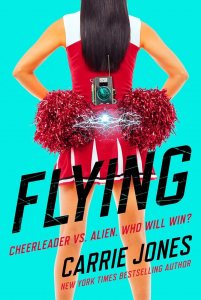 Carrie Jones ’93 has published two books since May, including this week’s Flying, a young-adult science fiction title.

In a profile of writer Carrie Barnard Jones ’93 in the Portland Press Herald, the young-adult novelist talks about her path through Bates, including meeting the poet Seamus Heaney — chronicled in the Spring 2014 issue of Bates Magazine — as well how she infuses social-justice themes into her young-adult books.

Jones has two recent books out, Time Stoppers, published in May, and Flying, released this week.

Jones recalls her uncle, an attorney, challenging her to “pick up the gauntlet” as a writer.

She told reporter Michael Berry the nature of her gauntlet: “If you can, you should always fight for others.”

Berry says the philosophy has “not only informed Jones’ fiction for middle-graders and young adults, it has led her to engage in public service” and other social causes, including “co-editing a collection of nonfiction essays about bullying.”

Time Stoppers, like Jones’ other books, tells a fantasy story. But for Flying she chose the science-fiction genre because “I wasn’t seeing a lot of characters” like her intended female protagonist, who goes from weak to strong as the story unfolds.

Humans and other animals pay attention to characteristics of their potential mates. When it comes to genetic compatibility, the attention might be subconscious but it’s still there.

Professor of Biology Don Dearborn is the lead author of new research published in the journal Molecular Ecology that explains the instance of an animal — Leach’s storm petrels — that ignores one important genetic trait of their potential mates, their immune system.

Specifically, the petrels ignore the “major histocompatibility complex,” a set of genes that help fight off pathogens like viruses and bacteria. 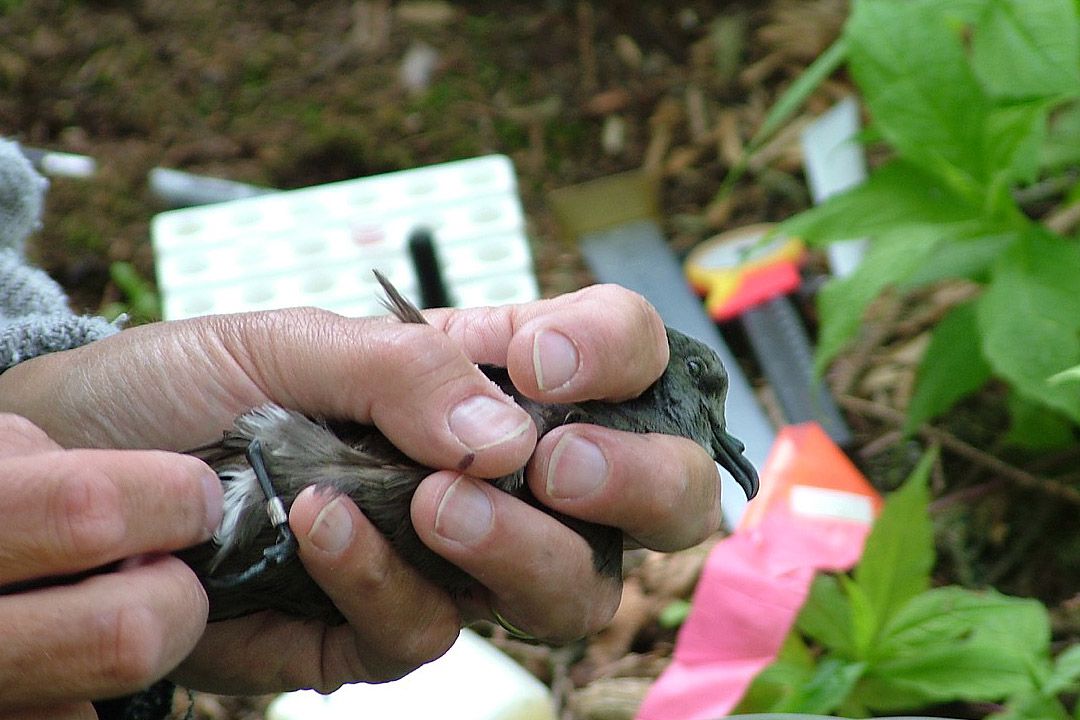 An adult Leach’s storm petrel is measured and fitted with an individually numbered leg band during island research in the Bay of Fundy. (Photo courtesy of Don Dearborn)

Like many species of birds and mammals, a Leach’s storm petrel possesses two copies of the important immune-defense genes. “But in contrast to what is seen in most animals, the duplicated genes in storm petrels are not identical,” Dearborn says. “They’ve evolved to become functionally different from each other.”

In other words, the offspring of a Leach’s storm petrel will “inherit a genetically diverse and robust immune system even if their parents didn’t pay attention to genetic features when choosing a mate.”

One upshot, Dearborn says, is that storm petrels “have the freedom to choose mates based on other features — such as who will be a good parent.”

For animals that do respond to such things as a potential mate’s immune-defense genetics, it’s thought that smell plays a part in that subconscious activity. “The idea that any animal, including humans, could tend to some of a potential mate’s characteristics and not others has wide implications for future genetic research,” Dearborn says.

Saying that his study is perhaps “unique among wild-animal animal studies” in its level of genetic detail, Dearborn did his off-shore island research in the Bay of Fundy.