On April 17, Jack Allard ’16, a two-time All-American lacrosse player and politics major at Bates, walked out of the Hospital of the University of Pennsylvania as medical staff applauded. 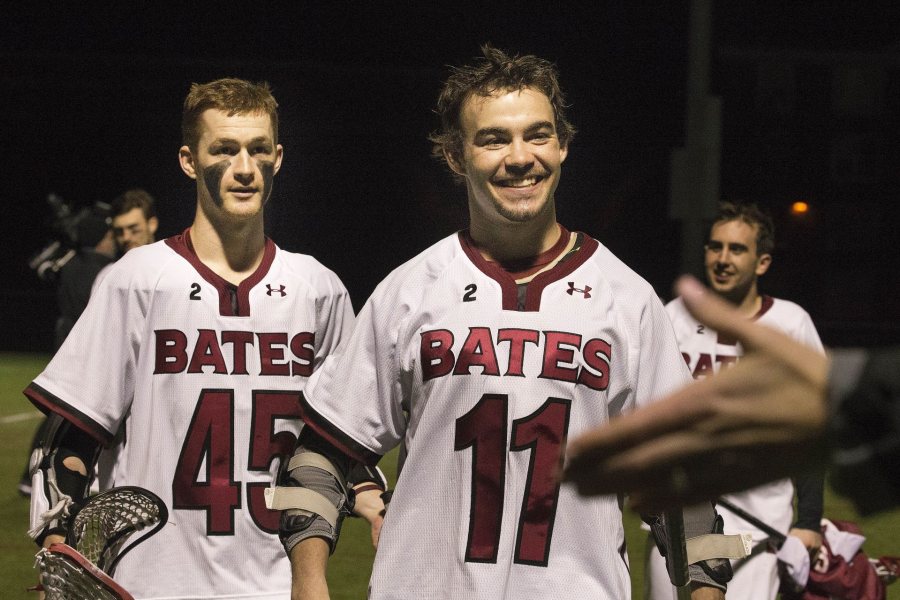 Allard’s dramatic story — his weeks long fight with COVID-19 — had drawn steady attention from the national media but this happy chapter was particularly well-chronicled.

Not long after first showing COVID-19 symptoms in mid-March, Allard was hospitalized in New Jersey. He was placed on a ventilator and later airlifted to Philadelphia to take part in a trial for an experimental treatment. There, his condition improved day-by-day.

Due in part to Allard’s young age and otherwise good health, his family speaking out, and his high school and college lacrosse teams rallying around him, his story drew international attention.

“He took personal responsibility for lifting the Bobcats to national competitiveness,” wrote Lasagna. “Most importantly, his teammates will tell you that he is a better and more giving person, a more caring mentor than he is an attackman.”

Five weeks ago, former @RHSBOYSLACROSSE standout and @BatesCollege All-American Jack Allard was confirmed positive for #COVID19. He was put on a ventilator. Last Thursday, he walked out of the hospital. For Jack and the hundreds more who have recovered, we’re optimistic. pic.twitter.com/Lj5JFlZ5Yk

From his family’s home in Ridgewood, N.J., Allard told Matt DaSilva of US Lacrosse Magazine that his story should serve as a cautionary tale.

“We need to listen to our scientists and our doctors when they give us warnings and give us guidance,” he said. “People my age think it’s not going to hit them and, if it does, it’s going to be a slight flu. That’s clearly not true. It took me to my knees.”

Steve Collins of the Lewiston Sun Journal reported on an initiative led by Assistant Professor of Biology Andrew Mountcastle to 3D-print face shield visors to protect medical personnel from the coronavirus.

The Androscoggin County Emergency Management Agency is distributing the shields, which faculty and staff from Bates, Bowdoin, Colby, and other institutions with access to 3D-printers are creating.

“I feel it’s the least I can do to support members of my community and state who need it most,” Mountcastle said.

Writing in Lit Hub, Jane Costlow, the Clark A. Griffith Professor of Environmental Studies, reflected on teaching a course, “Catastrophe and Hope,” during the very kind of catastrophe her students read about.

As an added layer, this semester is Costlow’s last as an instructor before she retires. For her, there will be no opportunity to incorporate the present moment into her future teaching. But she’s trying to convey to her students that upheaval like this need not be defeating.

“My experience of life first in the Soviet Union and then in post-Soviet Russia had convinced me … that people in extraordinarily constrained political and economic conditions make lives of dignity, lives inflected with moments of joy and commitment,” says Costlow, whose background is in Russian literature.

“I wanted my students to read a book like Zhivago because it’s about a society that comes apart, lives that are profoundly—viciously—unsettled, and yet there are forms of endurance, too.”

We owe more to our young writers: On the relevance of the workshop — Literary Hub

Also in Lit Hub, writer and writing professor Ru Freeman ’94 argued that creative writing faculty and university writing departments should prioritize not the craft of writing or the parsing of prose, but helping students understand their own experiences within their society and become “fearless” writers who speak truth to power.

“We must commit, as a collective, to bringing a fierce energy to our classrooms where a few students may develop an intensity of discomfort in their intestines, but most will finally identify their guts as being part of the body they inhabit,” Freeman writes.

“With passionate effort, our students might yet go from being a concert of crows cawing in the same register, safe within the dull shades of uniformity, to articulating the music and iridescence of a truly creative menagerie.”

T.S. Eliot and Me — The Ellsworth American

Retired high school English teacher Todd Nelson ’78 wrote a column for the Maine Ellsworth American about reading the poems of T.S. Eliot and, after a fashion, encountering the poet himself.

Nelson lived for a time near the London home where the late Eliot had lived. Nelson took to the poet in high school and college; Eliot’s “Four Quartets” helped inspire his senior thesis on religious poets.

“Eliot follows me, bursts from his poems informing my own arc,” Nelson writes. “It’s a life’s work fathoming Eliot’s poems. Why not? It was a life work to write them; to weave the threads of memory, history, family experience, religion, and philosophy into self-study.”

Piecing together the history of jigsaw puzzles — multiple outlets

As quarantined Americans turn to jigsaw puzzles to pass the time, several news outlets have turned to Professor Emerita of Economics Anne Williams, an expert on toys and puzzles, for a history lesson.

The first jigsaw puzzles were made with scroll saws — also known as jig saws — and were intended to teach geography, said Williams, author of The Jigsaw Puzzle, Piecing Together a History.

During the Great Depression, families used jigsaw puzzles not only for entertainment, but for income. “They set up the saw in their kitchen or their basement, started making jigsaw puzzles and selling them to their neighbors or renting them out through the local drug store,” Williams told CBS News.

Documenting history during the pandemic — UPAA

In a roundup of the how college photographers were documenting the closure of their campuses, the University Photographers’ Association of America featured work by Phyllis Graber Jensen, director of photography and video for the Bates Communications Office.

The Bates photography focused on the experiences of students, faculty, and staff as Bates made the huge and historic transition to remote learning in mid-March.

Graber Jensen told the UPAA that she was guided by professional training and her instincts. “I didn’t yet have specific directions or assignments, just my usual internal, professional guidance — ‘Bates Communications needs to document this’ — plus the unequivocal support from my boss to forge ahead.”

In a time of crisis, a twentysomething rookie reporter learns the value of community newspapers — Anchorage Press

As the coronavirus sent the country into a lockdown and sent people scrambling for information, Henry Colt’s thoughts turned to his recent stint as a reporter for the Daily Sitka Sentinel in Alaska. For this 2019 graduate, the pandemic underscored the value of community newspapers.

“Newspapers, of which more than one in five have closed in the U.S. during the last 15 years, are as vital to their communities as potlucks, concerts, salmon-sharing and marine-invertebrate-themed house parties are to Sitka. And in Sitka, few things are more vital than the Sentinel,” Colt wrote in the Anchorage Press.

“Who else will tell you that an electric fishing boat took its maiden voyage? That your neighbor just won a $50,000 grant? That an injured great horned owl passed its rehabilitation test with flying colors?

When professors are cut off from their students, what do they do? — 207

NewsCenter Maine’s 207 news magazine talked to professors Andrew Kennedy and Michelle Greene, whose remote class “movie trailers” were a hit among their students and thousands of people on the internet.

The best part of migrating a course online is making the trailer #AcademicTwitter pic.twitter.com/HONk8q14wa

Kennedy, an assistant professor of chemistry and biochemistry, made a trailer for his course “Mechanisms of Memory.”

“It’s like preparing for a baseball season, and you show up to your first game and after the fifth inning the umpire says, ‘Well actually we’re gonna play football now,’” Kennedy told 207’s Rob Caldwell, referring to the abrupt shift to remote learning.

“So I was learning these new tools and learning how to make videos. I went down a rabbit hole of, ‘This is funny; I might as well try it.’”

Inspired by @Prof_AJKennedy 's great class trailer and my own lifelong desire to be James Bond, I present Neuroethics 2020: The Classroom is Never Enough. https://t.co/UfQuDhlklp

Greene, an assistant professor of neuroscience, made her trailer in James Bond fashion. Her students appreciated a section about her new teaching assistant — her cat, Tesla.

“To not have those in-person dialogues is hard,” she told Caldwell. “That being said, we still have deep, rich, lovely conversations.”

For the Bangor Daily News, Mara Tieken, an associate professor of education and expert on rural education and issues, wrote that while images from the coronavirus pandemic are primarily urban — empty streets, subways, and airports — the crisis also poses serious risks for rural communities.

In rural areas, hospitals tend to be sparse and under-resourced, fewer rural residents than urban dwellers have internet access, food banks are running low, and newspapers that deliver important information are scaling back or closing.

“Right now, what rural communities need most is access: to health care, to the internet, to food, to information,” Tieken writes. “This access will help mitigate the worst effects of an already deadly crisis. But what is particularly frustrating about this moment is that these inequalities were identified long before now.”