Eighteen students in the course “Presidential Campaign Rhetoric” have been going full tilt on a mock White House campaign since September.

And today, Oct. 25, full tilt becomes warp speed as the Republican and Democratic campaigns face what’s known in politics as an October surprise.

Associate Professor of Rhetoric Stephanie Kelley-Romano steps to the lectern in a first-floor Pettigrew Hall lounge and gets right to the point. 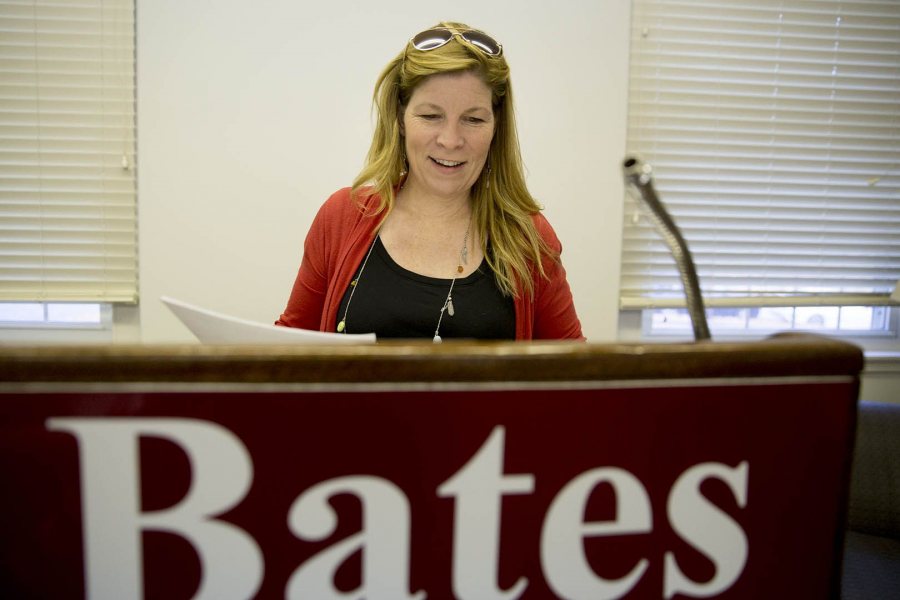 Each campaign has already developed biographies and platforms, the Dems offering “Progress We Can Count On” and the Republicans, “The Future We Deserve.”

All that has drawn in hundreds of other students: “voters,” more than 600 at last count, who include all rhetoric and debate students plus students in 23 other Bates courses. “President Clayton Spencer has registered to vote, as have alumni and parents,” Kelley-Romano says. 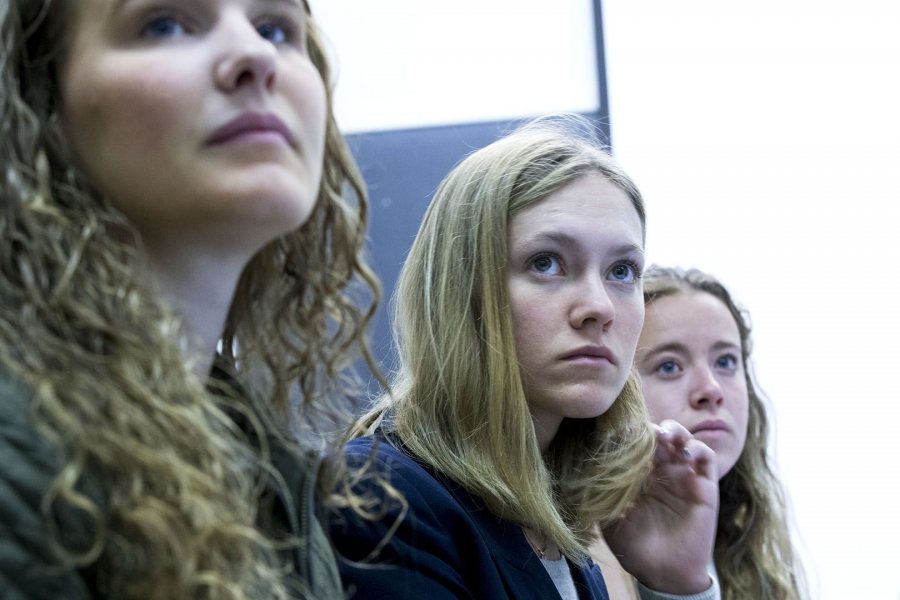 The “crisis” at hand is an outbreak of smallpox in the U.S., and the campaigns have until noon to develop a public statement that will inform and calm the nation while announcing a containment plan.

“I mean, smallpox is supposed to be eradicated,” says Gabe Nott ’17 of Bronxville, N.Y. He’s playing a Democrat from Maryland running for president. “Yeah, I know,” Kelley-Romano says, deflecting the implied question.

Another student tries to pull info from Kelley-Romano: “What vaccine do you need to prevent smallpox?” The professor doesn’t bite: “I don’t really know. Maybe you should check with the CDC.” 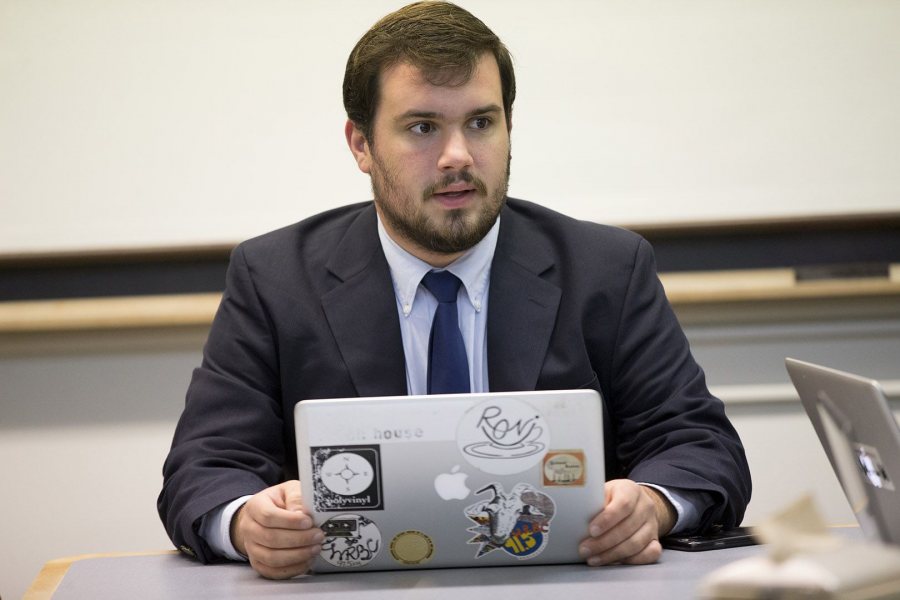 Gabe Nott ’17 of Bronxville, N.Y., is the Democratic candidate for president in the mock campaign that’s a key element of the course Presidential Campaign Rhetoric. (Phyllis Graber Jensen/Bates College)

The campaigns spend the first half-hour or so figuring out what smallpox exactly is — a reminder that they’re young (or I’m old). Lots of us were aware of the last smallpox outbreak (1972 in Yugoslavia, killing 35 people), but these students were born between 1995 and 1996.

The Democrats’ candidate for vice president, Courtney Foster ’18 of Newton, Mass., notes that smallpox was “a real disaster” before being eradicated. Campaign manager Amanda San Roman ’17 of East Setauket, N.Y., responds that their statement doesn’t need to talk about the horrors of the disease. “The public is not already worried about smallpox. Don’t fear-monger,” she suggests.

A senior interviewer for Admission, San Roman has to switch hats because she’s got two interviews scheduled at Lindholm House. “Sorry, I can’t work on this now,” she says, and heads off. 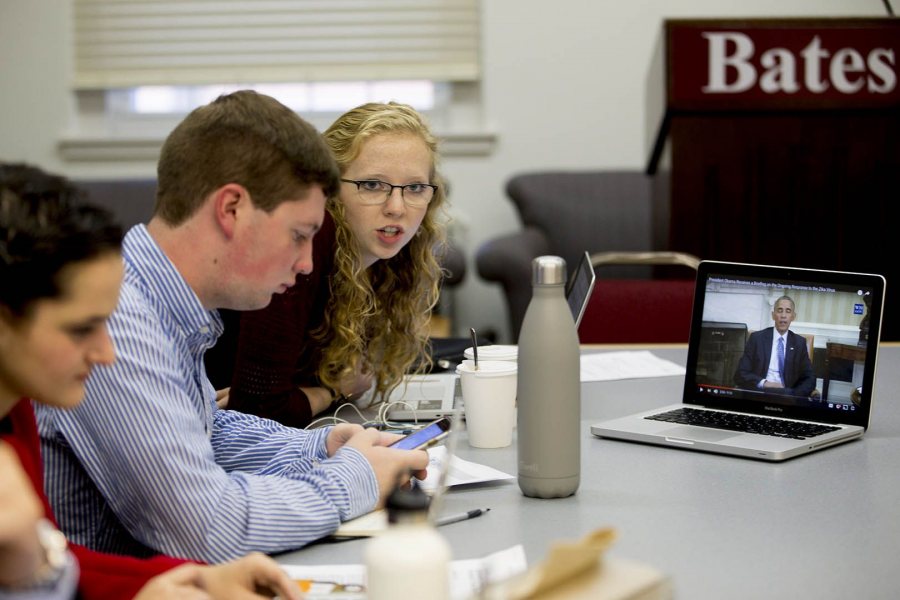 The campaigns have split up to work. Upstairs in the Republicans’ war room, they’re getting clues about how presidents handle health crises by watching, on a widescreen TV, how President Obama talked about Ebola in 2015. Downstairs, the Dems analyze Obama’s May 2016 briefing on the Zika virus.

Like the Dems, the Republicans are trying to grasp the historical scope of smallpox. They learn that smallpox was used as a biological weapon in the 18th century, when the British intentionally gave smallpox-infected items, including blankets, to Native Americans.

And now, smallpox and bioterrorism, plus some ambiguous hints in two official-looking memos given to the campaigns by Kelley-Romano, has the campaigns on high alert.

The Republicans’ presidential candidate, Molly Chisholm ’17 of Boston asks her team, “Do we need to address that?” Downstairs, the Democrats ask the same question: “Are the Republicans going to go to national security?” 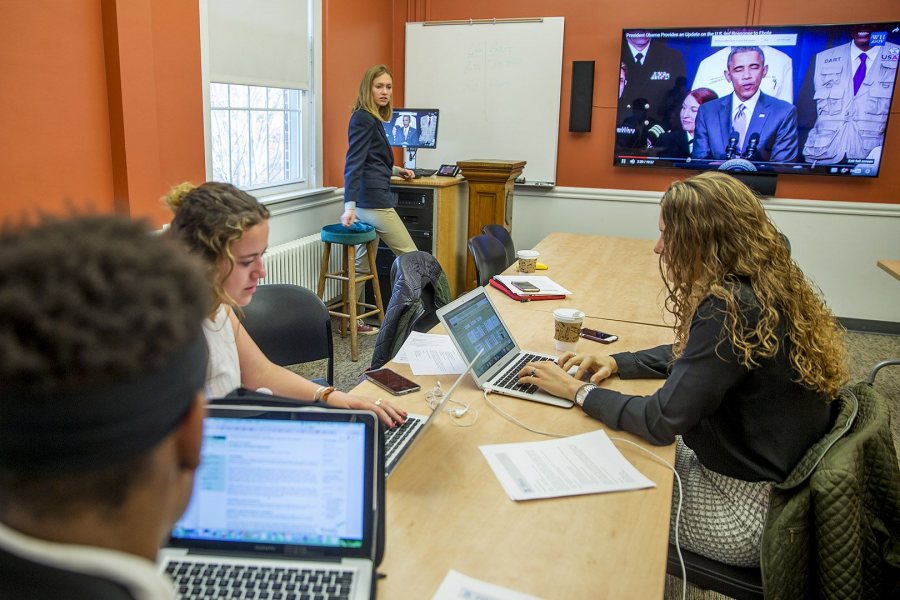 On the stool, Molly Chisholm ’17 of Boston, the Republican candidate for president, and her team review President Obama’s statement on Ebola. (Phyllis Graber Jensen/Bates College)

On the question of whether to speak to the bioterrorism threat, Chisholm makes the call: “We need to talk about bioterrorism. As Republicans, we need to be the national security party.”

Following her lead, her team comes up with rhetorical tactics, and Honor Moshay ’17 of Los Angeles, the campaign’s media director, is a font of ideas: “Why don’t we get a Bates EMS student to stand next to her during her address? We need a lab coat, too.” She adds, “Maybe we could get Paul Menice,” mentioning a well-known officer with Security & Campus Safety. 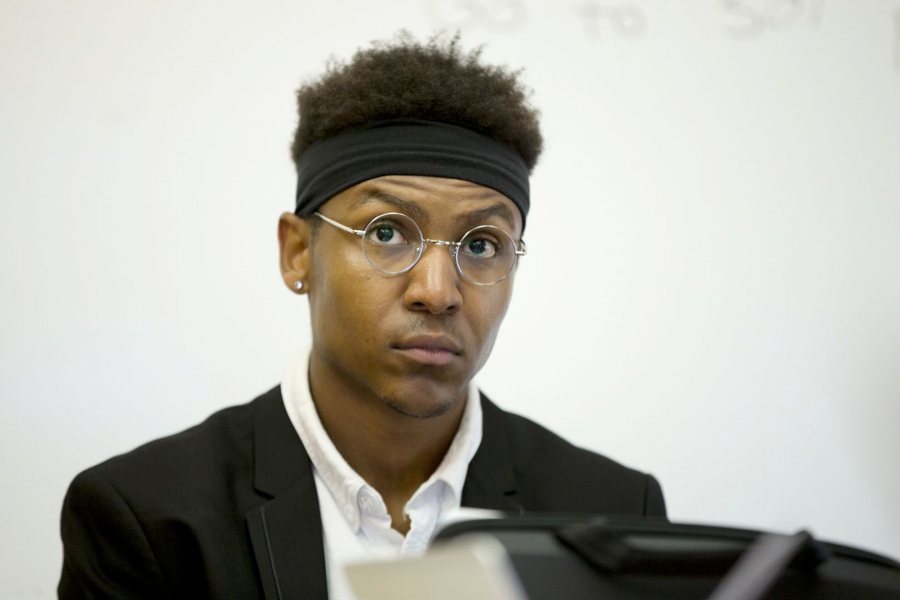 When Kelley-Romano told Nott to check with the Centers for Disease Control and Prevention, she wasn’t kidding.

A little after 9, the campaigns leave Pettigrew, cross Alumni Walk, and enter Hathorn Hall for their meeting with CDC consultants, aka students in the course Mathematical Models in Biology, taught by Associate Professor of Mathematics Meredith Greer. 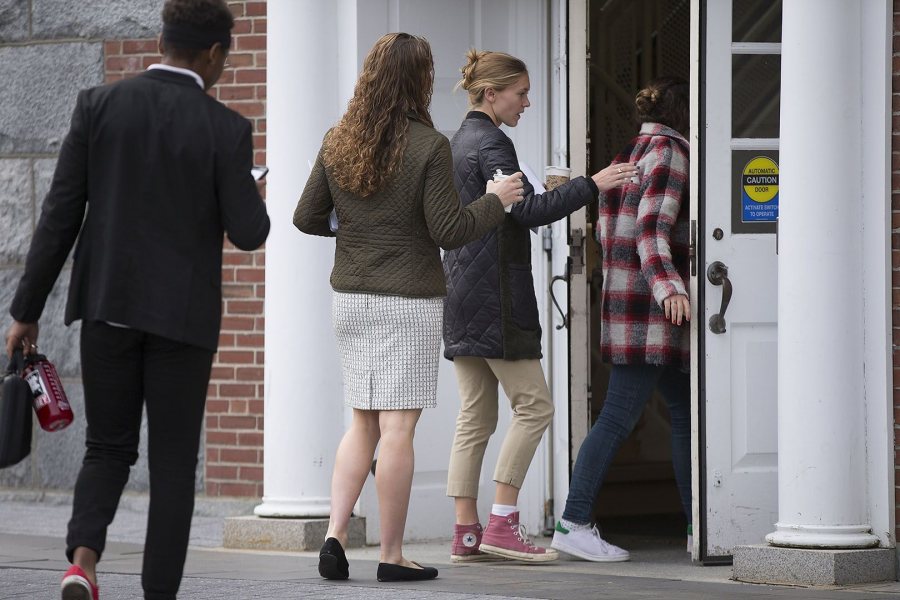 The Republicans, pictured, and the Democrats head into Hathorn Hall for their meeting with the CDC consultants, aka math students. (Phyllis Graber Jensen/Bates College)

The short walk from Pettigrew to Hathorn takes the rhetoric students from one academic world to another. “We have guests,” Greer tells her students as the Democratic and Republican candidates and their staffs enter Hathorn 303.

The professors give a brief overview of the mock situation before the group splits in three: Democrats, Republicans, and students playing the media.

Greer and Kelley-Romano have teamed up before to deliver a public-health “crisis” to the PCR class. That was Ebola in 2014, when that disease was in the news. 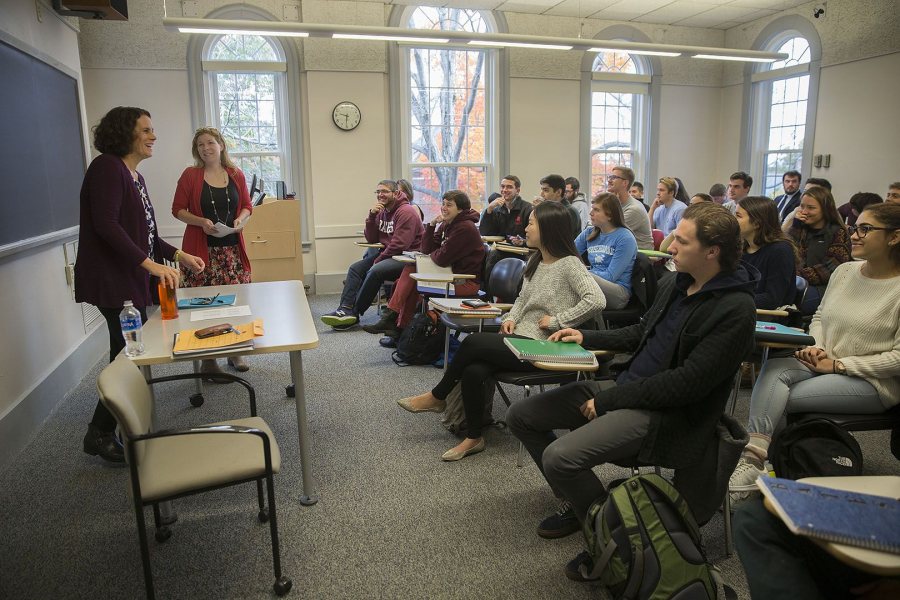 Chisholm, in fact, was part of a student team that worked with Kelley-Romano to tweak the course during her freshman year. “It’s really cool to see the interdisciplinary side of the course come into full effect,” she says.

According to the memos, two smallpox cases are in Massachusetts, where the Republican candidate, Chisholm, is governor, and two cases are in Washington, D.C., next door to Maryland, where Democrat Nott is governor.

The campaigns are meeting with the CDC consultants to develop a strategy for containing the smallpox outbreak in their home states.

It’s slow going at first as the two groups, rhetoric and math, weren’t quite sure what the other needs — Mars and Venus and all that.

The students’ discomfort is part of the plan, explains Greer. “They learn so much from working it out on their own.”

Moshay, the Republicans’ media director, asks what seems to be a reasonable question: “Can we quarantine a city?” The math students chuckle — from their reading, they know that large-scale quarantines are easier said than done.

Moshay tries again: “What are the typical responses to smallpox?” which elicits the most blackly humorous line of the day, from a math student: “Widespread panic and death.” 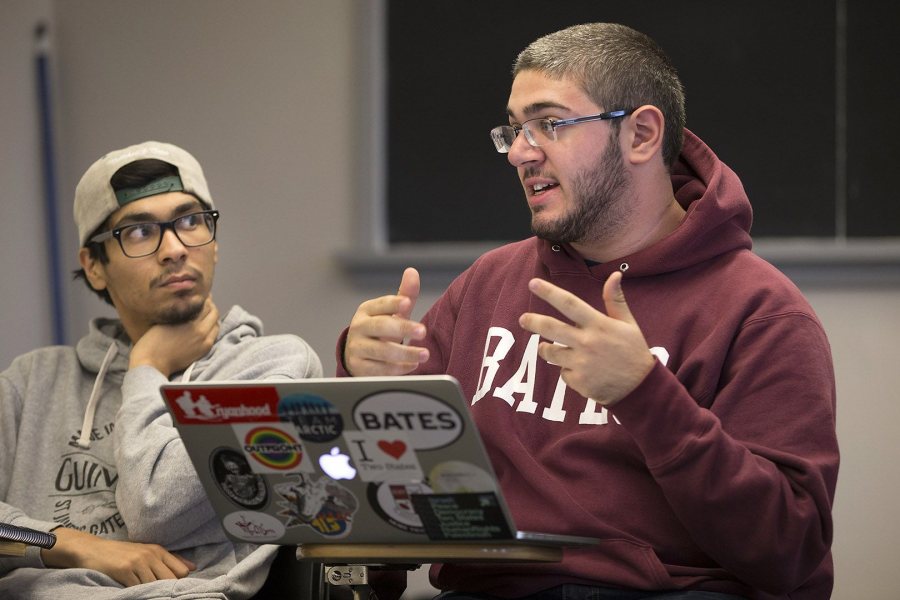 Math students Evan Goldberg ’19 (right) of Belmont, Mass., and Joseph Torres ’17 of Los Angeles work with the campaigns during their visit to the “CDC” in Hathorn Hall. (Phyllis Graber Jensen/Bates College)

He pumps his fist: He’s figured out that a blend of vaccinations and quarantine measures for Chisholm’s home state of Massachusetts would result in a manageable death toll. Without a containment plan, the model predicts all-out catastrophe: 85,000 dead. With the plan, the deaths would number 7,000.

Whitehead shares graphs with the Republicans that show various scenarios. “When we got the graphs from Gabe, that was awesome,” said Chisholm.

“How can theory be used in current-day life?”

It also represented a communication breakthrough. “When we outlined what we wanted to do in our speech — dissuade fear and show the public that we have this under control — they were able to give us what they knew.”

Greer says her students were jazzed to link their knowledge with a real-world scenario. “They loved the feeling of working with data and with real disease ideas,” she says. “This project has an especially realistic feeling, one that is important to see in math classes. All this theory we have learned: How can it be used in current-day life?” 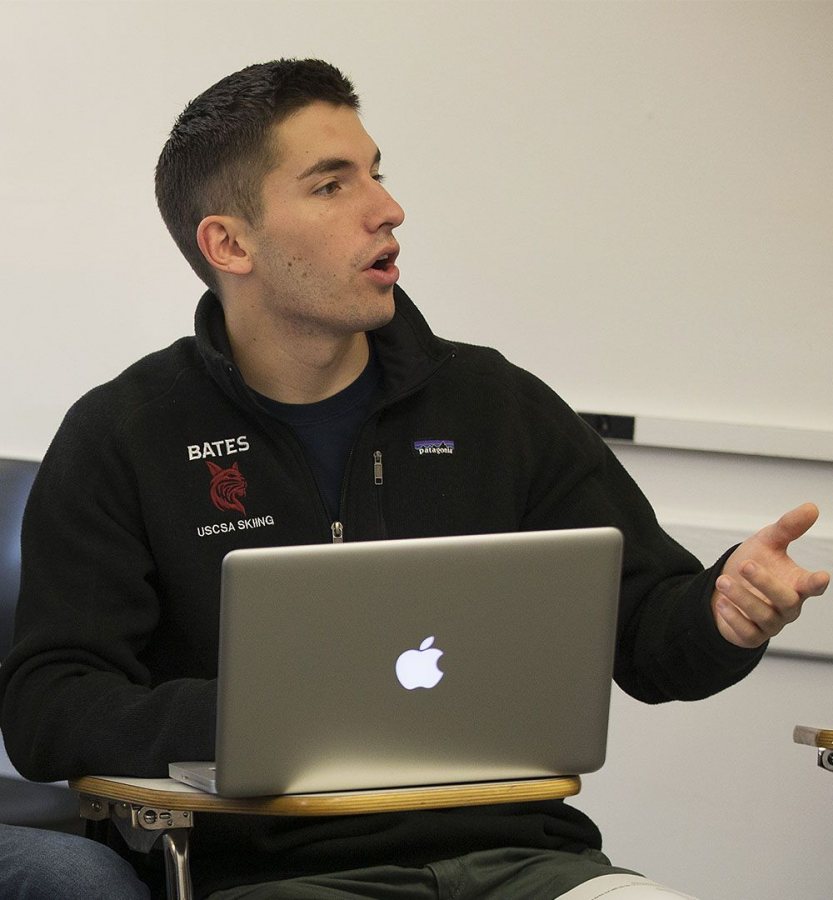 The two campaigns head back across Alumni Walk to their Pettigrew war rooms to work on their smallpox statements, which they’ll deliver in the Digital Media Studios at noon.

Chisholm wants her statement to explicitly say that a foreign country might be to blame. She also says that the statement “has to be a rallying cry. We are still trying to win votes.”

Her campaign manager, James Erwin ’18 of Yarmouth, Maine, is more cautious. “We don’t want to sound paranoid.” A minute later, Moshay shows up with facemasks and a white lab coat for their Bates EMS person to wear. 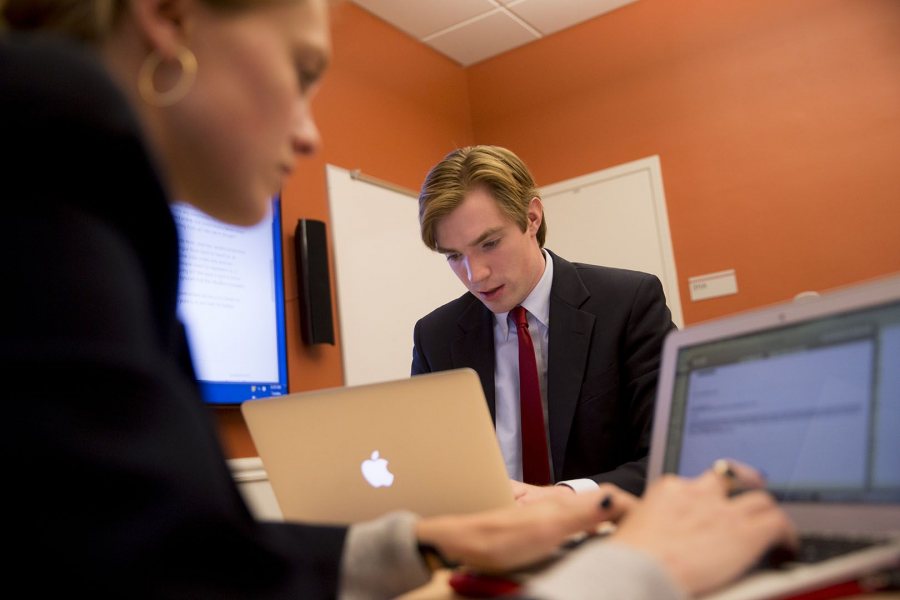 Amanda San Roman, the Dems’ campaign manager, who had to leave to do Admission interviews, returns. “I talk about this course in all my interviews,” she says because prospective students “are so impressed by it.”

She tells the prospies that the course “is more in depth than anything they’ve experienced before. And it ranges so far around campus. We have all different groups coming together and teaming up to make this as real as possible.”

“Adrenaline,” San Roman says. “As a 21-year-old student, I don’t always know what I’m doing in this. But it’s cool to be going through it with people who are interested in it and who are trying really hard.” 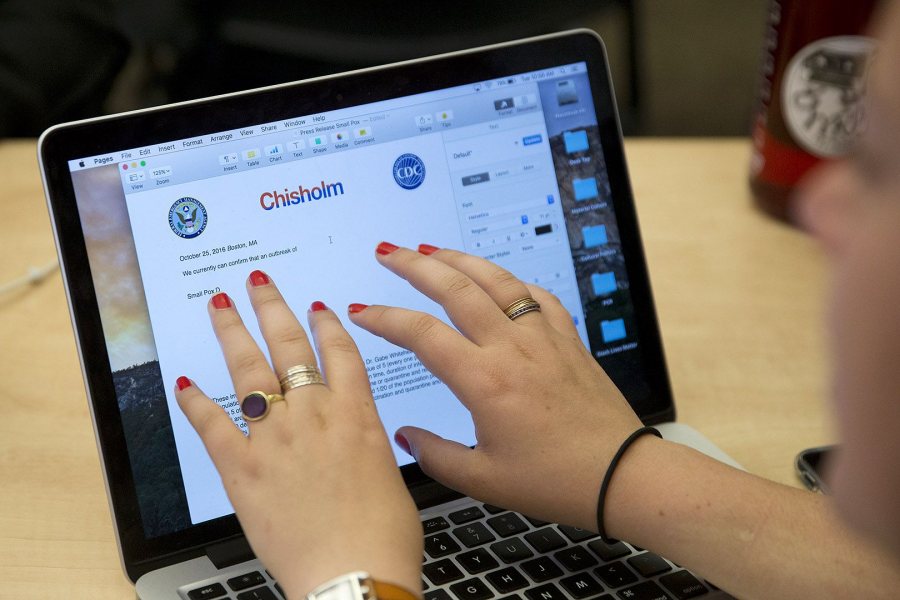 The Republicans’ printed statement cleverly incorporated the campaign logo and those of FEMA and the CDC. (Phyllis Graber Jensen/Bates College)

A half-hour remains until each candidate has to deliver their address, and 95 percent of everyone’s attention is focused on prepping their statements. 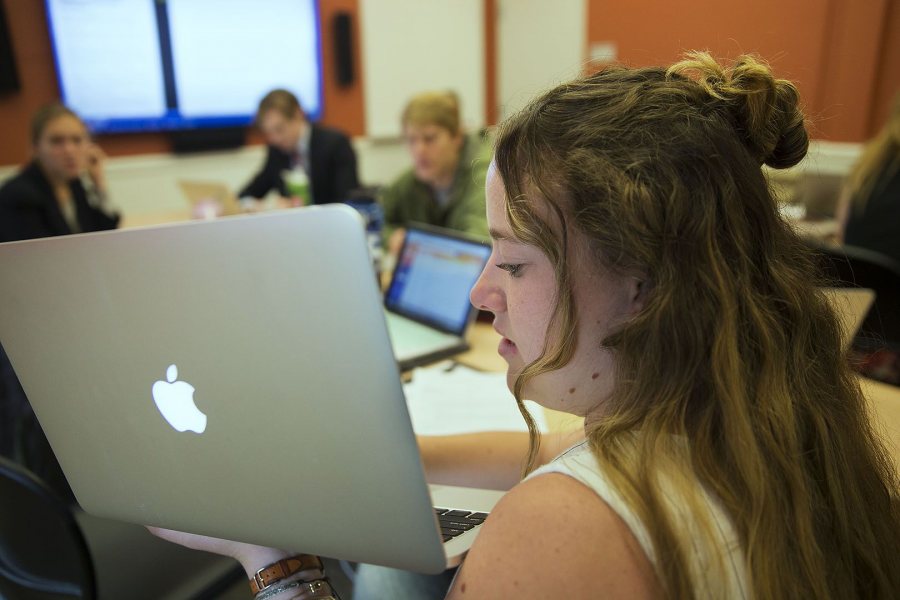 Gabe Nott will deliver his statement first, and Foster, his running mate, tries to calm his nerves. “Stay calm and controlled,” she says.

“You know me,” he says with a tight smile. “If there are two things I am, it’s calm and controlled.”

The speech goes without a hitch. “Smallpox has been eradicated before, and it will be again,” he says, channeling every president from FDR to Obama. “We did not bow to Pearl Harbor…. We will not crumble now.” 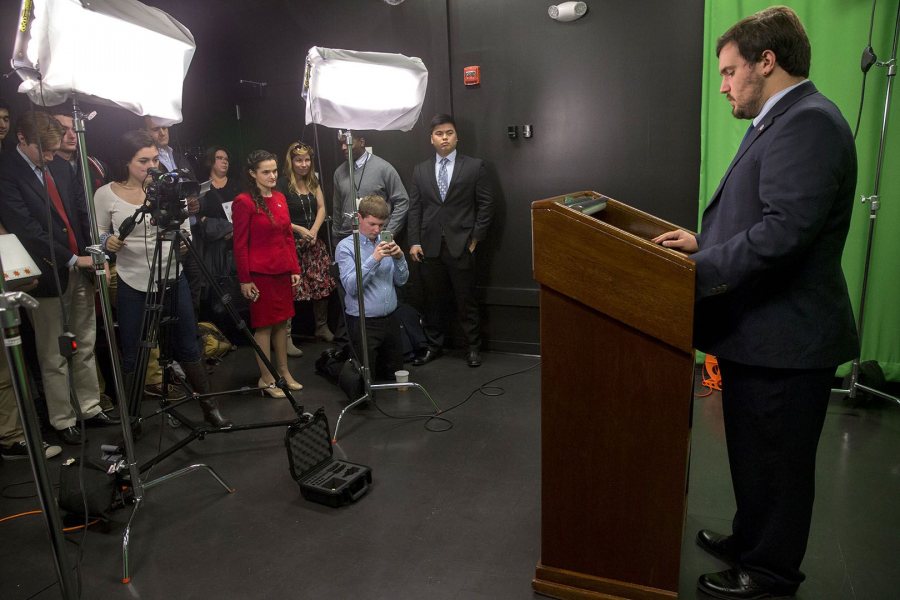 Nott delivers his statement in the studio of the Digital Media Studios in Pettigrew Hall. (Phyllis Graber Jensen)

While Nott delivers his talk alone at the lectern, Chisholm is flanked by the Bates EMS student Sam Whitaker ’18 of Hollis, N.H., who plays a CDC staffer, and Erwin, her campaign manager.

Nott alludes to the possibility of bioterrorism without naming a country, saying that the “re-emergence of the disease could have been an intentional attempt to undermine American safety and well-being.”

The Republicans hit the bioterrorism angle, too, saying it’s “very unlikely” that the smallpox came from a U.S. source. Chisholm goes a step further, mentioning specifically that Russia has smallpox stocks and that the outbreak “is a new type of international terrorism to consider.”

“For the rest of us, it’s important to remain calm and follow instructions from public-health officials,” she says.

“We have faced crises of this magnitude in the past, and every time, our attention to detail, our intuition, and our deliberate approach has guided our country. Events such as these endure as memorable moments of strength and unity for our country.”

She concludes her speech by saying, “God bless America.” 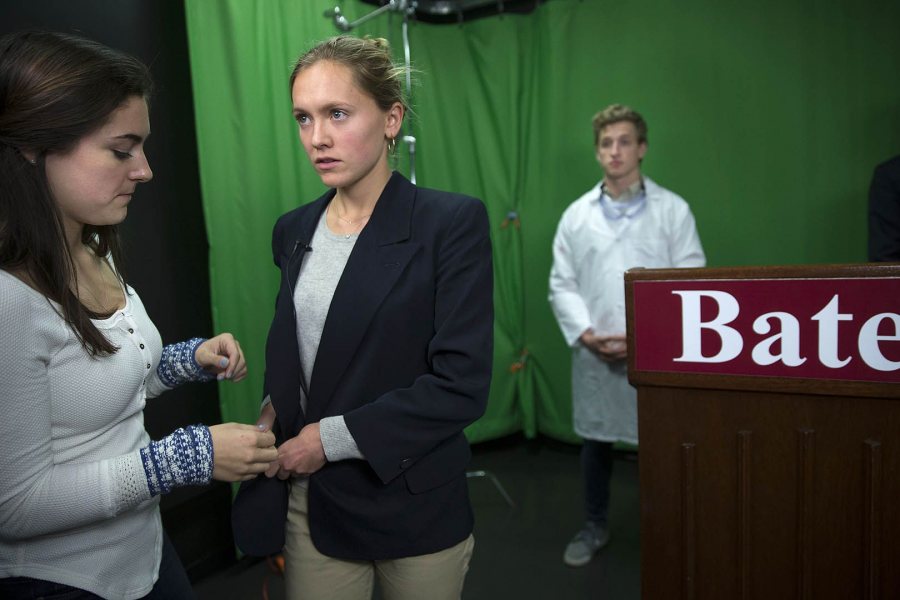 Chisholm prepares to deliver her briefing. In background, Bates EMS Sam Whitaker ’18 of Hollis, N.H., gets ready to play a CDC staffer who will stand by the candidate. (Phyllis Graber Jensen/Bates College)

“They both did well with the specifics of containment and using action verbs to put themselves in the action and in the solution,” Kelley-Romano said.

Beyond the lessons of the day, Kelley-Romano puts a fine point on her course.

“I think life is interdisciplinary — a Bates liberal arts education demands the simultaneous consideration of multiple fields of knowledge,” she says.

Rhetoric, specifically, “prepares students because it forces them to consider not only the construction and content of what they see and hear but also examines the medium — radio, television, film, and social media — and its impact.” 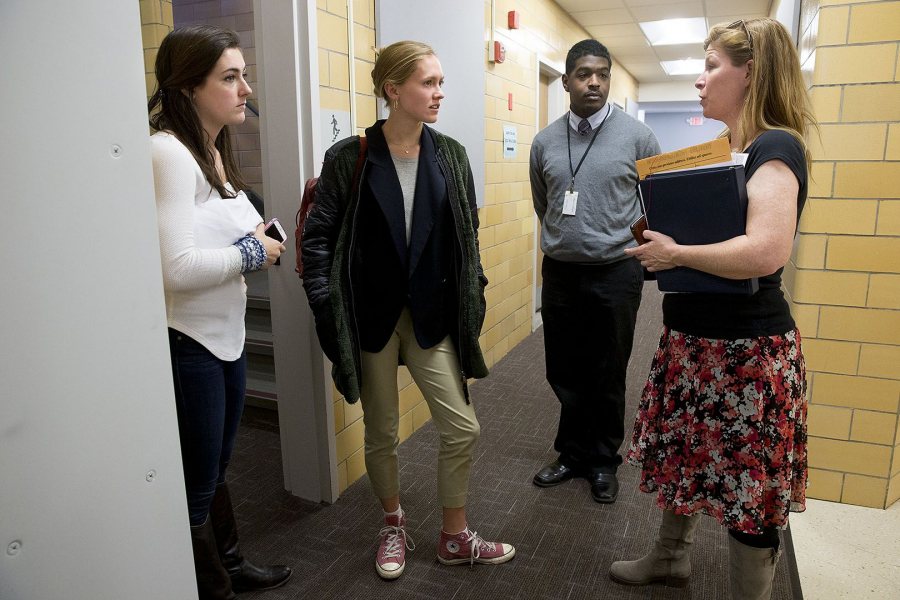 Setbacks and successes: How students navigated academic surprises in the fall 2020 semester