As students, faculty and staff gathered to watch the election results in the Chase Hall Lounge, the mood was probably similar to other college campuses of Bates’ ilk, with many expecting the historical news of the first female president-elect.

But the end of a bruising campaign that saw its share of unprecedented moments, election night delivered one more surprise. 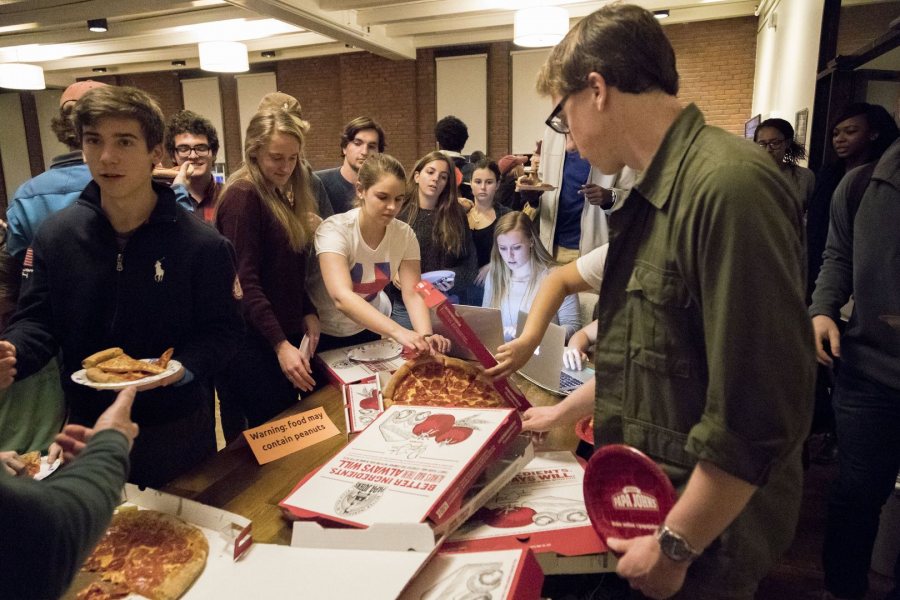 Arianna Fano ’19 of Lincolnshire, Ill., and classmate Zoe Seaman-Grant ’17 of Charleston, S.C., had spent the entire day encouraging fellow students to vote. “One of my favorite things about Bates is how politically active it is, and that’s why I came here,” Fano said around 10:30 p.m. “It’s nice to come together as a community and watch the results…even if it doesn’t go well.”

As early results came in around 8:00 p.m., there was nervous optimism. Cheers accompanied the projections for New York, Massachusetts, and the great state of Maine, but the “too close to call” reports from swing states and lopsided red state wins were met with groans or silence.

Associate professor of Politics John Baughman and Tim Kaplowitz ’20 of New York City attempted to relive some of the tension. “After today, we won’t have Nate Silver to make us crazy anymore,” Kaplowitz said.

By midnight, as the outcome became more apparent, the nervous optimism had fully transitioned to dejection and disbelief for students like Kayla Jackson ’19 of Metuchen, N.J., who found the results of her first presidential election as a voter “heartbreaking.”